SAN ANTONIO -- If you somehow haven't seen the clip yet of Gregg Popovich pleading with his players to give him some "nasty," after blasting them as "unconfident" in the same Instant Classic of a huddle, don't worry.

You'll see it plenty between now and Tuesday night's Game 2 of the Western Conference finals.

You'll be seeing and hearing the magic captured by the courtside mics for years if the San Antonio Spurs -- winners of 19 straight and unbeaten for a whopping 47 days -- proceed from this Game 1 escape to win seven more games and clinch the fifth championship of the Popovich era.

Yet the loudest statement from Pop on this Sunday night, when the Spurs wiped out a daunting fourth-quarter deficit to haul the Oklahoma City Thunder back to school, was actually transmitted by a number found within the box score of a 101-98 slugfest.

That's how many minutes Popovich doled out to his favorite 34-year-old sparkplug.

And that's a lot of run for Manu Ginobili at his age.

During an injury-plagued regular season in which he had to sit out nearly half of the 66-game schedule, San Antonio's sixth man extraordinaire averaged just 23.3 minutes. In the first two rounds of the playoffs, as San Antonio swept the overmatched Utah Jazz and the hobbled Los Angeles Clippers, Ginobili didn't make it beyond the 30-minute threshold once in eight games.

Those, though, were playoff foes that allowed for patience from the game's most demanding coach. Clearly antsy after yet another week of rest for the Spurs between Round 2 and Round 3 -- as well as privately paranoid about the prospect of overconfidence creeping into his locker room with a team that last tasted defeat days before federal taxes were due -- Popovich saw enough of the Thunder's fearsome length and athleticism to throw Ginobili into the fray after just 5:29 elapsed in Sunday's first quarter.

The more telling example: After the Spurs amassed a ridiculously uncharacteristic 14 turnovers in the first half, Popovich waited a mere 156 seconds before sending Ginobili in for Danny Green with a whopping 9:24 left in the third quarter.

There would be no instant payoff thanks to some of the best defensive rotations we've ever witnessed from the Thunder, ushering the Spurs to 6-for-24 shooting in that third quarter. The Spurs entered the fourth trailing by nine and, worse, looked lost and hesitant and, as Popovich railed, curiously "unconfident" for a team that has lost only five times all season when Ginobili's name is on the stat sheet with Tim Duncan's and Tony Parker's.

Yet there was still time for Ginobili to score 11 of his 26 points in the final period, seal the win with a vintage ball-fake-and-drive, take a couple charges and remind everyone in the building that -- healthy in the postseason for really the first time since the Spurs' last championship in 2007 -- he's still a playoff game-changer.

"That's Manu's game," Popovich said. "That's what he's done for us his whole career. Without that, we have a tough time winning."

After expressing his relief that the Spurs committed only three second-half turnovers and describing himself as "rusty," Duncan (16 points and 11 boards) chimed in with this handy reminder: "[Ginobili] hadn't played a game against these guys all year, so it's great to see him out there and be effective."

Good point. The Spurs arrived for work having won eight of the teams' nine previous regular-season meetings, but Ginobili missed all three this season. Which means that this Game 1 marked his first opportunity since last season to duel the bearded lefty who was just crowned as the NBA Sixth Man Award winner.

Those who know him best in Spurs circles say it's a mistake to underestimate how much Manu yearns to show James Harden and everyone else that he's still the best southpaw out of the bullpen in this or any series … even if he'll never say so publicly. You certainly got that sense as early as the final minute of the opening quarter, when Ginobili sliced inside for a layup before draining a 3-pointer at the buzzer as he fell in the corner.

"You could see he had a little bounce," said Parker, who also managed to chip in 18 points, 6 assists and 8 rebounds.

Ginobili was frankly overdue for this sort of performance after averaging just 11.3 points and shooting a lowly 25 percent on 3s in the first two rounds. But Popovich wasn't going to wait for encouragement no matter what the stats said. Not against the Thunder.

Before he knew that OKC's small-ballers would go stagnant offensively down the stretch or that the Thunder's crisply rotating D would vanish and surrender a fatal 39 points in the fourth, Pop had essentially committed to play Manu with Timmy and Tony for 24 minutes together with that early second-half summons. Those 24 minutes are a season high, according to ESPN Stats & Information, after San Antonio's vaunted trio shared the court only 30.2 percent of the time (just 116 of a possible 384 minutes) in its first eight playoff games.

Turns out that the threat posed by the Thunder, even with Russell Westbrook reverting to wild shoot-first form, called for all of Pop's old reliables. The recently reacquired Stephen Jackson had been told all week that he should plan on extensive Kevin Durant duty in support of rookie Kawhi Leonard -- "I'm so excited, I couldn't sleep last night," Jackson said before tipoff -- and wound up playing the entire fourth quarter.

That gave the Spurs four crunch-time alumni from their 2003 title team and, thanks to a combination of the Thunder's short-circuiting offense and Jackson's sticky coverage, left a smothered Durant (27 points and 10 boards) without a fourth-quarter basket in the playoffs for just the third time in his career.

"Nasty is my name," Jackson joked, predictably claiming that Pop's pleas for more passion and embracing the "fun" of a taut, frantic game resonated with him more than anyone else on the Spurs' bench.

Then turning serious, Jackson tacked on a surprising admission given the way OKC squandered such a glorious opportunity to haul the Spurs back to Earth: "We were probably more nervous than they were tonight because we know these young guys can play."

Said Parker, sounding more like his coach every day: "We're going to have to play a lot better if we want to win Game 2. And I know if we play the same way, we're not going to win Game 2."

Most valuable player: It has to be Manu Ginobili. In a game in which the Spurs often struggled to find offense, Manu worked his brand of basketball magic, knifing and twisting toward the basket for layups, as well as looping around picks to deliver pinpoint passes. He finished the game 9-for-14 from the field for 26 points, netting 11 of those in the fourth quarter while guiding the Spurs to the Game 1 win.

X factor: Gary Neal gave up with a number of huge baskets (5-for-9 FG, 12 points) and also drew a handful of charges on crucial plays that really helped swing this game in the Spurs' favor.

That was … inexplicable: It's the 2012 Western Conference finals and at one point Derek Fisher was 6-for-6 for 13 points. There are no words, just a whole lot of confusion.

Manu Ginobili, Spurs: He's still got it. While the Spurs have become a deeper team this season, Game 1 showed how they still need their super sixth man. Ginobili had 26 points on 9-for-14 shooting and sparked the fourth-quarter spree.

Thunder's big three: While Derek Fisher was carrying the load early, the big names on the Thunder's roster weren't at their best. Russell Westbrook going 7-for-21 from the field is not on the script for knocking off the No. 1 Spurs.

"I need a little bit more dose of nasty."


-- Spurs coach Gregg Popovich, talking to his team during a fourth-quarter timeout. Trailing by nine, they delivered the goods in Game 1.

I think KD should have took more shots. So for all you sensitive fans out there, RELAX!!! I don't even know how to hate. 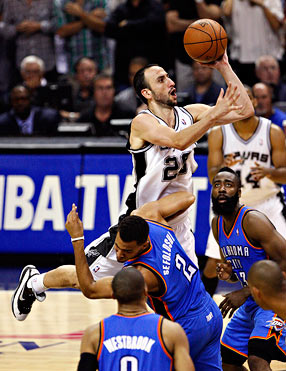 Jonathan Daniel/Getty Images
Spurs guard Manu Ginobili didn't let much get in his way, scoring 26 points as the Spurs won their 19th game in a row.

9. Dunk Of The Night

The San Antonio Spurs defeated the Oklahoma City Thunder in Game 1 of the Western Conference finals at San Antonio after sweeping the Utah Jazz and Los Angeles Clippers in the first two rounds of the postseason. The Spurs became the first NBA team other than the Los Angeles Lakers to win its first nine playoff games in one year. The Lakers won their first nine or more playoff games in three different years: 1982 (9), 1989 (11) and 2001 (11).

Tim Duncan scored 16 points and grabbed 11 rebounds for the Spurs on Sunday night. It was Duncan's 29th double-double in playoff series openers, passing Wilt Chamberlain for third-most in NBA history, behind Magic Johnson (36) and Shaquille O'Neal (30).

The SuperSonics/Thunder franchise has lost each of their past 10 playoff series openers that it has played on the road. (Its last Game 1 road win was in 1992, when Seattle defeated the Warriors in Oakland in a first-round matchup.) It's the third-longest current losing streak of its kind for any NBA team; Milwaukee has lost its past 15 playoff series openers away from home and Cleveland has dropped its past 14.