SAN ANTONIO -- Four team fouls in the game's first two minutes. Long stretches when Kevin Durant inexplicably never sniffed the ball. Two double-digit leads blown, more crunch-time brain cramps than you could count … and the latest in a series of fashion crimes at the postgame podium from Russell Westbrook after the most forgettable of Westbrook fourth quarters. 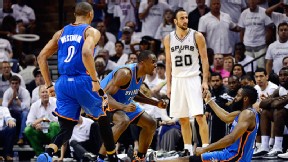 It was a lot to overcome.

It was never pretty.

"It never is with us," Thunder forward Nick Collison said with a smile.

Yet here's where it gets truly wild with the fast learners who just saddled the mighty San Antonio Spurs with their first three-game skid of the season: The Oklahoma City Thunder couldn't care less about style points. Not anymore. If you're trying to pinpoint precisely where and how much the Thunder have truly evolved since their last taste of the Western Conference finals, that's where you start.

How they're digging deep, game after game against what we thought was the closest thing to a juggernaut in today's NBA, to keep playing no matter what happens.

This keeps up and the young, uber-athletic Thunder will have to be rebranded … as Team Find A Way.

"We're more resilient," Collison said late Monday night, after the Thunder moved to within one home win of the NBA Finals by surviving the squandering of a 13-point lead with more than five minutes to go, seizing a 3-2 series lead over the franchise that provided their blueprint.

Collison continued: "We don't have as much experience as San Antonio, and there's teams with more experience, but the experience we do have is valuable. We've been through enough [playoff] adversity now that we realize that we just have to keep going."

Said Thunder coach Scotty Brooks: "You learn. We're not too proud to learn."

It shows. The sting of losing in this same round to the Dallas Mavericks in five games last spring -- "Just seemed like every one of those games got away from us," Collison recalls -- and then blowing a nine-point lead at the start of the fourth quarter of Game 1 in this series has somehow had a bonding effect. All those aforementioned Thunder woes in this seminal 108-103 road triumph make it easy to forget how they've disrupted San Antonio's vaunted pick-and-roll better than anyone thought they could. How they've hounded Tony Parker out of the zone of his life with Westbrook playing his part and getting little credit for it. How they've forced San Antonio to scramble from behind for most of the series and prodded Gregg Popovich into his go-to adjustment heading into this Game 5: Manu Ginobili moving into the starting lineup in place of the back-to-his-Cleveland-self Danny Green.

Yet there were so many chances to splinter along the way. So many disappointments after OKC blew all of a 14-point lead, built it all the way back up to 13 in the fourth with the wheezing hosts spent by their comeback and then watched Westbrook (who still happened to muster 23 points and 12 assists) commit dreadful turnovers on three straight possessions late, indefensibly forgetting the over-and-back rules on the third of those TOs. The Thunder also gave Ginobili the gift of a potential game-tying 3 in the game's final seconds when Durant, with a timeout available, allowed himself to get trapped in the corner on the sort of inbounds play on which that should never happen, leading to another potentially crushing turnover.

Amazingly they survived it all. Fortune obviously plays a part after that many gaffes, but it's also clear that the Thunder have learned how to rebound and cope and grow on the fly -- after coming home with a 2-0 deficit -- as well as any on-the-rise crew has ever done it. Adversity, to use Collison's word, no longer leads to automatic panic like it once did. So hungry and emboldened by all they've achieved in this playoff run, having lost only one game in eliminating the Mavericks and Lakers, Durant's Thunder hang in now when things go wrong. Even against the very best.

"Eventually," Collison says, "we calmed down."

The Thunder thus bubble with as much confidence now as San Antonio had when it sported a 10-0 record in the playoffs and an unbeaten streak of 50 days, having inflicted three L's on the Spurs in the space of just five days. Durant (22 of his 27 points after halftime) happens to be dominating proceedings as much as he ever has without taking every shot. It also doesn't hurt when OKC forces 21 more turnovers out of the league's recognized execution masters. Or when Daequan Cook supplies a crucial eight points in a four-minute span of the second quarter after sitting out all of Game 4. Or when James Harden (12 of his 20 points in the fourth quarter) can follow up a four-point play halfway through the fourth (courtesy of a Ginobili foul on a 3) with a step-back backbreaker from deep with less than 30 seconds remaining.

"We never just thought that we were supposed to wait our turn," Durant said, openly rejecting the NBA's long-spewed conventional wisdom about teams as young as OKC's.

"We always wanted to go and take everything."

That's where we are, unfathomably, after another Game 5 in San Antonio that Derek Fisher's grandkids won't believe when he tries to tell them the story.

You can't quite put it up there with Fisher's signature Game 5 here with the Lakers in 2004 and his famous Point Four buzzer-beater. But OKC's sage off the bench isn't throwing this one back.

"This was fun with all the back and forth," Fisher said. "This was fine."

Most valuable player: Kevin Durant shook off a poor first-half shooting performance to lead the Thunder in an impressive third quarter. The Thunder had a rough fourth quarter, but they survived with a win and KD was their best player Monday night.

X factor: Manu Ginobili started Monday night and was simply amazing, single-handedly breathing life into the Spurs big shot after big shot. He finished with 34 points on 21 shots to go with 6 rebounds and 7 assists.

That was … gutty: After a third quarter that made the Thunder seem ready to ascend to the NBA throne, they nearly imploded in the fourth quarter, surviving with just enough of the right plays and James Harden's memorable step-back 3-pointer in the final minute.

James Harden, Thunder: For his 3-pointer that might have turned the series, the bearded wonder gets kudos. Harden's 3-pointer with 28.8 seconds while hounded by Spurs rookie Kawhi Leonard sent Oklahoma City's lead to five just when it looked like the Spurs were going to take charge.

The where's-Manu? Spurs bench: With super sixth man Manu Ginobili moved to the starting lineup, the Spurs' backups not named Stephen Jackson had a hard time producing in the Game 5 loss. Perhaps Gary Neal fared the worst, missing all six of his field goal attempts in the loss.

"Championship teams win on the road. Oklahoma City just did that."

-- Spurs coach Gregg Popovich, whose team must win in OKC on Wednesday if it hopes to keep its drive to be a five-time champion alive.

As much as we like being right, the playoffs are way more interesting when we're wrong. 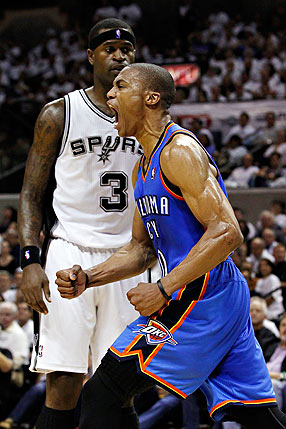 Tom Pennington/Getty Images
Russell Westbrook reacts after a dunk as Stephen Jackson looks on. Westbrook had 23 points and 12 assists -- his season-high for dishes including regular season and playoffs.

Kevin Durant (27 points), Russell Westbrook (23) and James Harden (20) provided the bulk of the scoring as the Oklahoma City Thunder posted a 108-103 win against the San Antonio Spurs. It was the second time in this series that Durant, Westbrook and Harden all scored at least 20 points in the same game. They became the first trio of teammates with two 20-20-20 games in the same playoff series against the Spurs since Kobe Bryant, Shaquille O'Neal and Glen Rice did it for the Lakers in 1999.