MIAMI -- A few steps down from the Miami Heat's locker room, house music from one of the arena's clubs spilled into the hallway, oblivious apparently to the mood in the rest of the building. Meanwhile, the Boston Celtics were making a beeline toward their buses, treating their postgame meal as takeout and evacuating the premises as quickly as possible.

The more things change, the more they stay the same, indeed.

The scene is more hip, the waterfront more attractive and the trendy clubs certainly more numerous. Other than latitude, though, it feels like 2010 all over again. LeBron James had just lost a home Game 5, and he and his teammates are headed to Boston for an elimination game at the hands of the underdog and underappreciated Celtics. Just like two years ago, they don't seem the least bit surprised.

Back then, with Dwyane Wade sitting at home plotting a coup to avenge his own loss to Boston, perhaps too much focus was put on James' shortcomings and not enough on the gravity of what that that Celtics team was executing. With the scene on the verge of repeating the same lack of respect should not be.

James and Wade are back at the brink of falling short from achieving their title promise again after the Celtics won their third straight Eastern Conference finals game, 94-90. It's so tempting to train the blame revolver at them and coach Erik Spoelstra for a series that has completely gone off the rails. But that wouldn't be fair to the team that's ahead.

The Celtics have clearly been the better team since a Game 1 loss, which they played less than 48 hours after their previous series ended. Given time to collect themselves and prepare their game plan, the veteran group has completely outclassed the Heat and sent the message that the dagger Miami thought it dropped last year was not a fatal blow.

Another 20-point, 10-rebound effort from Kevin Garnett, his third of the series. Another double-digit assist game from Rajon Rondo, his fourth in a row. Another game in which Doc Rivers' pregame and in-game moves appeared to outfox Spoelstra, this time constantly changing defensive schemes that flummoxed the home team. Another game in which the older, slower and supposedly less athletic Celtics beat the Heat to loose balls, including maybe one of the most fascinating plays of Rondo's career. Another Celtics role player stepping up, this time Mickael Pietrus hitting two huge 3-pointers in the fourth quarter.

"I never thought we'd be in this situation," Wade said. "I'm not surprised by much, I have seen a lot."

Wade has seen this before and so has James. Unlike two years ago, this time James played to his averages. He scored 30 points with 13 rebounds, the type of strong numbers he has put up all series. He had nine points in the fourth quarter. He was not the difference-maker that he has been before, and for that he can shoulder the blame, given that it is the most valuable player's role. But he did not disappear. Wade, too, was reasonably strong with 27 points, including 14 of them in the fourth when the Heat had a six-point lead with six minutes to go.

The Heat did not lose the game with passivity or fear or failure to take the last shot. They just got outhustled and outplayed, a trend that has been going on for a week now. It was impossible to excuse it, Miami led by 13 points in the first half, nine in the third quarter and had control in the fourth. But Boston just took it, never quitting and never missing a chance to take an edge. An attitude the Heat have been missing despite all their talk to the contrary.

"We wouldn't want to be in this situation," James said. "We had an opportunity to take a leap but we didn't."

If that sounds matter of fact, it was. James' thoughts were sort of like he played, not off base but without the expected and required emotion. Certainly not the same way he played in Game 5 against the Celtics last year, closing them out with a strong fourth quarter and then falling to his knees with feeling.

That was, though, how Rondo played, which manifested itself in a vital moment in the fourth quarter. After three less-than-stellar quarters, Rondo was a difference-maker in the fourth. The all-world point guard beat James to a loose ball, outleaping him to tap it to Pietrus for a 3-pointer that changed the dynamic of the game.

Wade had just pulled off a miracle block of Brandon Bass, soaring from nowhere to start what promised to be a fast break. Already up six points with Garnett on the bench getting a rest, a basket there by the Heat might've broken the Celtics. Instead Rondo got there first, tapping the ball to Pietrus with a display of quickness, strength, court awareness and fearlessness that pretty much sums up his career. The game went 22-12 in Boston's favor after that.

Earlier this series Rivers admitted that the Heat would probably win the loose-ball battle, admitting "the quicker guy usually gets the loose ball and they have a lot of quick guys." But the Celtics have been quicker, Rondo has been quicker.

"Absolutely sensational," Rivers said of the play. "That was maybe the biggest play of the game."

The Heat got Chris Bosh back after missing him for nine games. If you're wondering why that fact is just being addressed this deep in the story it's because this is where it belongs. Bosh contributed coming off the bench, scoring nine points with seven rebounds in 14 minutes. But Spoelstra, for reasons not completely understood, didn't match Bosh up with Garnett, as the Heat badly needed, and instead purposely had Bosh avoid Garnett substitution patterns.

Then in the fourth quarter, when the Heat were fighting for survival, Spoelstra never even used his All-Star forward. Bosh was a little slow on rotations recovering from his ab strain, but he made plays when he was in the game and the Heat were in need of plays. Instead, Garnett hammered away on Miami again with big baskets, big rebounds and big defense.

"I didn't think it would necessarily be fair to him to throw him in with three minutes to go," Spoelstra said.

Meanwhile, Rivers had a different problem: He didn't worry about being fair.

"I think I asked a lot of our guys, maybe too much at times," Rivers said, referring to the lineup changes and game-plan alterations he was making during timeouts and on the fly. "And they came through, and that was terrific."

Neither man meant it to come off that way, but that is the series in a nutshell. James is playing well (averaging 32 points and 11 rebounds) but not great. Wade is playing well only in bursts. Bosh is back but still being held back. Spoelstra's countermoves are not working.

The Celtics are getting greatness from Garnett, Rondo is setting Celtics team records, Ray Allen and Paul Pierce are steadily contributing despite injuries, role players were taking turns in the spotlight and Rivers is earning every cent of his $7 million annual contract.

It's not over yet, but the Heat are in need of something and it's not clear where it is coming from. Their coach, under immense pressure, seemed more concerned about perception than that reality.

"It's a loss and that's all it is," Spoelstra said. "Our focus right now is to fight any kind of noise from the outside or any human condition."

Forget about the noise, the Heat ought to be very worried about the Celtics.

Most valuable player: Kevin Garnett's trademark intensity buzzed throughout, as he slammed the ball down with ferocity, hit his jumpers, roved on defense and threw up his ninth 20-10 game of the playoffs after just seven in the regular season.

X factor: It's hard to gauge immediately why Chris Bosh sat the entire fourth quarter as Garnett kept the Celtics alive. But in this close of a game, with these kinds of stakes, the Heat could have used his presence to occupy Garnett on both ends.

Defining moment: With 52 seconds left, Paul Pierce, just 5-for-18 from the field, drew LeBron James on a man-to-man assignment, hesitated for one moment to get in rhythm, then buried a 3-pointer through a tough contest to put the Celtics up 90-86. The Heat would never recover.

Kevin Garnett, Celtics: As perhaps the 2012 playoffs' leading performer, KG didn't disappoint in Game 5. He put up 26 points and 11 rebounds, swatted LeBron late and put the Celtics in the driver's seat for their third NBA Finals berth since 2008.

Doughnut-hole Heat: With or without Chris Bosh, rather than just matching Kevin Garnett in a small-ball game, Miami might have benefited from having a 7-footer who could provide the occasional low-post move and try to wear down KG. The Heat ruled the boards 49-39, but didn't even play nominal centers Joel Anthony and Ronny Turiaf.

"The competition, the naysayers, the owners who talk too much. The people who don't think a 36-year-old can do what I do. I take a lot of pride in my craft, I work really hard at my craft everyday, and I'm a true professional."

-- Kevin Garnett, identifying what motivates him after taking a Game 5 win over Miami.

Wade, LeBron and Udonis could be overheard through training room doors having a heated discussion about breakdowns. 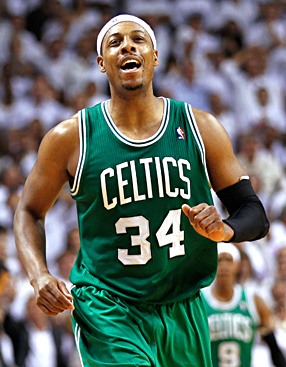 Mike Ehrmann/Getty Images
What's a painful sight for Miami? Watching Paul Pierce react after he made a 3-point basket over LeBron James' outstretched arm with 52.9 seconds left. The Celtics beat the Heat 94-90 on Tuesday night, taking a 3-2 lead in the East finals that now shift to Boston for Game 6 on Thursday.

The Boston Celtics won 94-90 despite being outrebounded 49-39 by the Miami Heat. It was the first time Boston won a road playoff game despite losing the rebound battle by double digits since Memorial Day, 1988. The Celtics beat the Detroit Pistons 79-78 in Game 4 of the Eastern Conference finals at the Pontiac Silverdome despite grabbing 11 fewer rebounds than Detroit.

LeBron James scored 30 points and grabbed 12 rebounds, but only handed out two assists in the Heat's home loss to the Celtics. It was James' 21st 30-point/10-rebound playoff game, but the first in which he failed to register at least three assists.