OKLAHOMA CITY -- Kevin Durant walked down the hallway, away from the postgame interview room, toward the closest members of his circle, stepping into an immediate future that will put him on basketball's greatest stage.

I couldn't help but think back to the last time I saw him walk away from the Western Conference finals, a year ago, when he trudged through the American Airlines Center in Dallas after the Mavericks had eliminated his Oklahoma City Thunder. That night I told Durant that the Thunder were too young, that their time would come, but he fought back against both premises, saying it was no excuse and their time was supposed to be right now. 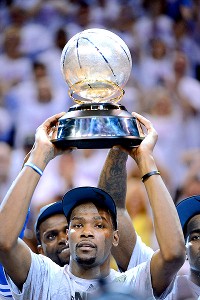 A year later his mood had changed, and so had the accessories. Instead of a backpack slung over his shoulder there was an NBA Finals cap perched atop his head. And, with 12 months of perspective, he had an appreciation of the NBA's natural order of things.

"I understand it's a process," Durant said. "We had to wait our turn."

This was the series when the Thunder stopped acquiring merely knowledge and began applying it with striking results. They accelerated the learning curve, while simultaneously slamming the brakes on the San Antonio Spurs. Not only did they halt the Spurs' 20-game winning streak, the Thunder sent them spinning in reverse and out of the playoffs with four consecutive losses. The Spurs lost as many times in seven days as they had in the previous 12 weeks.

And just as the Thunder stormed back to take the series after losing the first two games (becoming only the 15th team in NBA history to do so), they rebounded from an 18-point deficit in the first half of Game 6 to win 107-99 in front of a delirious crowd.

"We had a great first half, we got control of the game, and they continued to fight," the Spurs' Tim Duncan said. "They continued to get back into it. Their talent's just overwhelming. It was impressive."

How can anyone, even the members of the losing team, not be impressed by the Thunder?

They are the worthiest of conference representatives, running a historical gantlet of kings. In three playoff rounds they have defeated the Lakers, Mavericks and Spurs, gotten past Kobe Bryant, Dirk Nowitzki and Duncan, the three teams and star players who had accounted for every Western Conference championship since 1999 and won the NBA Finals a collective 10 times.

The young Thunder, who feature four players who don't meet the 25-years age minimum required to rent a car, even manage to astonish the older heads in their own locker room.

"The poise and the way they understand just how hard they need to work and the way they adjust to any situation, it's amazing to see young superstars like that just go out and get it and at such an early age," said Thunder reserve center Nazr Mohammed, a 14-year NBA veteran who was on the Spurs' 2005 championship team.

It helps that the Thunder can absorb the wise words of those who have been there. Kendrick Perkins, who won a championship with the Boston Celtics, and Derek Fisher, a five-time champion with the Lakers, have guided them throughout the playoffs and offered more encouragement and advice when they addressed the team in the locker room afterward.

"Let's get four more of these [wins]!" Perkins exhorted.

Fisher, ever practical, told them "The recipe that we have works" and they need to continue with it in the Finals, whether the opponent is the Celtics or the Miami Heat.

He might have sent a subtle, silent message in the postgame celebration, when he was the very last player to don the caps and T-shirts given to the team; cheap souvenirs compared to true reward, the collection of rings he amassed with the Lakers.

You can forgive the rest if they couldn't wait to wear their new attire. After leaving Seattle in 2008 the franchise started its inaugural season in Oklahoma City by losing 29 of its first 32 games. They made the playoffs the next year, only to draw the defending champion Lakers, who put them out in a sixth game in which the Thunder lost because they forgot a fundamental of basketball: boxing out. With the Thunder leading by a point, Kobe Bryant missed a jumper, but the young Thunder were caught watching the flight of the ball, while Pau Gasol slipped in to grab the rebound and put it back in at the buzzer.

"That was our first year" in the playoffs, James Harden said. "So that was our excuse."

The fans gave them a standing ovation for their effort, sticking around the arena until the last player had left the court.

The front office looked at the roster and decided it needed to get bigger in order to beat the Lakers, so the Thunder shipped out Jeff Green as the central part of a trade that brought Kendrick Perkins from the Celtics.

Last year they ran into the Mavericks, who proved impossible for anyone to put away. The Thunder's litany of blown fourth-quarter leads, including watching a 14-point advantage slip away in the last four minutes of Game 4, taught them that they needed to finish games.

After exacting revenge this year by sweeping the Mavericks and putting out the Lakers in five games -- with a host of fourth-quarter heroics in both series -- they took on the Spurs' juggernaut.

"This was a series of, 'Were we going to play smart enough to beat them?'" Mohammed said. "We knew we had the talent to beat them, but they play so well."

Stunningly, the Thunder won the mental game, from Scott Brooks getting better strategic results than Gregg Popovich, to Russell Westbrook replicating a true point guard better than Tony Parker (Westbrook had 44 assists in the series to Parker's 38). The Thunder made a higher percentage of shots than the Spurs, the league's best shooting team. And the Thunder, who turned the ball over more than any team in the league during the regular season, showed a greater appreciation for the value of possessions in playoff games than the Spurs, who coughed it up a whopping 95 times in the six games.

The Spurs looked like championship material again in the first half of Game 6 as Parker, the fall guy for three subpar games, put together a monster first half of 21 points and 10 assists. But a Durant 3-pointer that dropped in with 0.4 seconds left in the first half -- there's that cursed number for the Spurs again -- started the Thunder's climb back into the game.

Five fourth-quarter Spurs turnovers helped the Thunder complete their comeback in Game 6. Three of them came on offensive foul calls, during a stretch when every time the whistle blew it seemed to go against the Spurs. When Popovich wasn't registering complaints to the nearest official he turned to an assistant to say, incredulously, "You've got to be kidding me."

Yes, the Thunder got some favorable calls on their way to the NBA Finals. That shouldn't detract from their effort, including Durant drawing what everyone agreed was his first charge of the season.

It's not the box score numbers -- such as Durant's 34 points or Westbrook's 25 or Harden's 16 -- that should strike fear in the rest of the league. It's their ages: Durant and Westbrook are 23 and Harden is 22. And now they're about to play in the first NBA Finals and eighth playoff series, an astonishing number for such a youthful group.

That it's all come together is a testament to the vision of general manager Sam Presti, who always thinks of the long-term, even when there are immediate needs screaming to be addressed. The irony is that his patient process has paid off with a trip to the Finals so quickly.

"We've never lived by a stopwatch or a calendar," Presti said. "We've just tried to continually invest in the process of continuous improvement and let the results settle where they may by the quality of the work. There's really no finish line in terms of trying to continue to improve. It's a credit to our players and our coaches to embrace that."

He was standing in a hallway, seemingly the one quiet place in the cauldron of noise that was Chesapeake Energy Arena. There was perspiration on his forehead and a bead of sweat running down his right cheek, the products of a jubilant Thunder locker room that had been crowded with front office members savoring the moment with the players. Later, Oklahoma Gov. Mary Fallin would stop by, showing the significance of this moment to the entire state.

"A lot of people packed in a small place," was Presti's description of the locker room. "There's going to be some serious dry-cleaning going on."

The cleaning bills are a side effect of success, the latest thing the Thunder franchise has learned on this remarkable journey.

Most valuable player: Kevin Durant. Thirty-four points, 14 rebounds, 5 assists, 1 steal, 2 blocks. Twenty of his points came in the second half as he shredded the Spurs from all over the court. Just a fantastic closeout performance by Durant.

Defining moment: Third-quarter run. Not only did the Thunder hold the Spurs to 31.8 percent shooting in the third period, but they shot 63.2 percent from the field themselves. They used their length and athleticism to dictate the tempo and pace in that quarter.

That was … controversial: Some really questionable calls will end up tainting what ended up being a truly fantastic display of basketball over these six games. We saw two teams play at a high level almost every quarter and truly battle. Sad that the officiating will be what's remembered.

Kevin Durant, Thunder: With 34 points and 14 rebounds, Durant never left the court and led the rally that gave the Thunder the Western Conference crown with a Game 6 win over the Spurs. Next: Will he get his first ring at 23?

Spurs' second-half squander: Louie Dampier didn't do it. Dale Ellis? Nope. Antonio Daniels? Never. Yup, the members of this Spurs team have the honor of the franchise's biggest blown halftime lead. With a 15-point edge heading into the third quarter, things were looking very good for the Spurs to head home to win the series.

"There's not much to complain about. We had a great run. We just couldn't beat these guys."

-- Manu Ginobili, whose Game 1 performance ended up being the Spurs' high point in the series. 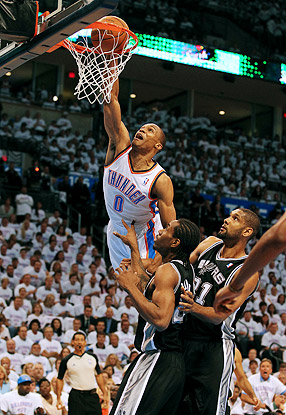