MIAMI -- Until a series ends with LeBron James and the Miami Heat raising a gold trophy instead of a silver one, there will be ways to devalue the performance. Doing just that, in fact, has become somewhat of a pastime over the past couple of years for a significant segment of the vast basketball-consuming audience.

By no realistic or reasonable measure, however, can James' display in the Eastern Conference finals be diluted with qualifications or cheapened with circumstance.

On Saturday night, Chris Bosh gave an All-Star performance at the most important time, Dwyane Wade had another excellent second half, the Boston Celtics completely voided their energy tanks and Shane Battier came up with some clutch shooting. All of these are factors in why the Heat beat the Celtics 101-88 in a Game 7. 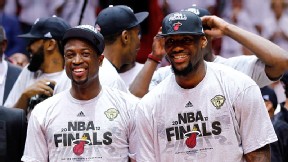 But the true and undeniable reason the Heat are headed to Oklahoma City on Sunday afternoon to prepare for the Finals is that James had the best playoff series of his career. Under pressure. Sometimes without a lot of help from his teammates. Against a great and experienced team that has been the biggest rival in his career to this point.

It looked like this: 33.6 points per game, 11 rebounds per game, 53 percent shooting, six 30-point games, five 30-point/10-rebound games, a 45-point elimination game on the road and an 11-point fourth quarter to finish off a 31-point, 12-rebound effort in the first Game 7 victory of his career.

The final analysis of James' season will indeed be completed by the next round; this everyone accepts. There were already numerous pictures of him wearing an Eastern Conference champions shirt and hat and celebrating before Saturday night. He's been here before, twice actually. It's not truly new ground.

But he'll always have this series, and considering the challenges, that is not something to wave off as insignificant while pontificating about the word "rings."

"I'm proud of him," said Celtics coach Doc Rivers, who has now coached 25 playoff games against James over the past five years. "He gets too much heat."

"Everybody should relax a little bit. He is great for our game; he is our game," Celtics guard Keyon Dooling said. "We need to uplift him instead of [trying] to tear him down."

"He was absolute brilliant in this series, and we all know it," Heat coach Erik Spoelstra said. "He's playing at a historic level during the playoffs. We do not take his talent or his will or his competitiveness for granted."

These Eastern Conference playoffs were not quite what they were billed to be two months ago. First Dwight Howard went under the knife. Then Derrick Rose.

Then -- and this name isn't as big, but he was huge for Boston's chances -- so did Avery Bradley. So the Heat did not exactly have to slay Ali, Tyson and Holyfield to return to the Finals. Their road, compared to the Thunder's past-champions tour, was less challenging.

James has rallied his team from behind before, most notably in 2007 versus Detroit, but this is the first time he's done in twice in a postseason. And did it with a 10-game stretch in which he scored 333 points on just 234 shots and grabbed 111 rebounds. This represents the best 10-game playoff run of his career.

Figure out a way to dismiss that if you will, but it's a hard sell to a fair mind.

"I can't worry about what people say about me, about my game, about who I am as a person," James said. "People have their own opinions, and rightfully so."

The Celtics did not come into the series with a full deck, both because of Bradley's injury and because Paul Pierce and Ray Allen were dealing with leg injuries. Rivers decided to try to play James straight up -- which for the Celtics means playing physically and trying to force jump shots but without committed double-teams -- and focus on slowing a slightly easier mark in Wade.

It worked for awhile. James was getting his 30-point games and Wade was being held in the teens, and the Celtics were able to craft their three straight victories. But then James slammed them in Game 6 with an epic show, the kind the Celtics were prepared for but hoped against, and then had several brilliant minutes in the fourth quarter of Game 7 to finish the job.

A dunk on a drive, a whip pass to Bosh for a 3-pointer, a driving bank shot under heavy contest at the rim. The momentum had shifted, and the Celtics, so weary they had to retreat to the scorer's table during a 20-second timeout so a few players could just for a brief moment get off their feet, were done. They didn't have enough left to match James at this level.

When he flew through the lane for that dunk, marking the 20th and final lead change of the game, three players in green watched him as he flew by. The Celtics scored six points the rest of the way. It was an undignified end to a hard-fought series, James finally finishing the demanding job but doing that coveted "finishing" just the same.

Rajon Rondo ended up leaving the floor before the game was over so he didn't have to see the Heat celebrate. So did Kevin Garnett, who averaged just 13 points and six rebounds over the last two games after putting up 20-point, 10-rebound efforts four times in the first five games of the series. Fatigue finally showed on the 36-year-old after an often-magical playoff run.

"Honestly, I just thought we had nothing left," Rivers said. "Everything was the front rim, we started throwing the ball away, they started beating us off the dribble."

That is not expected to be the case for the young and boundless Thunder. Their legs have hundreds of fewer games on them, even if they don't possess the tactical venom that has driven the Celtics for the past few years. Oklahoma City is deeper and fresher, and will have the home-court advantage. The Celtics surely would have liked to have the latter Saturday night.

But the Thunder also will have to deal with James, and as the Celtics will attest (even if through gritted teeth), right now that is some fantastic challenge. So let it begin.

MVP: LeBron James. He didn't live up to the standard he set for himself in Game 6, but so what? With many Boston and Miami players (Rajon Rondo, Brandon Bass, Paul Pierce, Chris Bosh and Dwyane Wade) playing well, LeBron (31 points and 12 rebounds) played just a bit better.

X factor: Chris Bosh. Although Boston power forward Brandon Bass (16 points on 6-of-8 shooting with four steals and sometimes-strong defense on LeBron) rose to the occasion, Bosh (19 points, eight rebounds, a career-high three 3-pointers and a plus-17 rating) stole the show off the bench.

That was ... awesome: Games -- especially ones involving the infamous Heat or the storied Celtics, especially ones in this era of nonstop commentary, especially Game 7s -- rarely live up to the hype. This one did. There was no dramatic ending, but for 44 minutes, two great teams went at each other.

LeBron James, Heat: He put his stamp on a first Game 7 victory with 31 points and 12 rebounds in the 101-88 East finals win over the Celtics. The Celtics led 82-81 with 7:58 to play, but LeBron's driving dunk sent the Heat on a spree that sends them to OKC.

End Of Big 3 Era? When Ray Allen and Kevin Garnett came to Boston and joined forces with Paul Pierce in the summer of 2007, a moribund franchise was reborn. So if free agents Allen and/or KG don't return, their Green résumé still impresses: one NBA title, two East titles and three East finals appearances. The Rajon Rondo era is at hand.

"We decided to come together and play together for a reason."

-- Dwyane Wade, who along with LeBron James and Chris Bosh scored the final 31 Heat points in Game 7.

Before you automatically cast LeBron as the villain, would you rather have a player leave town or an entire franchise bolt? (corrected) 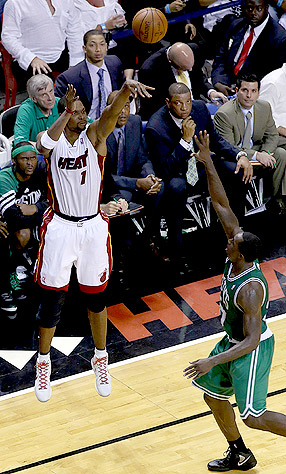 Robert Mayer-US PRESSWIRE
Chris Bosh drained a career-high three 3-pointers, one thing Celtics coach Doc Rivers (seated) could not have planned for. Bosh made two of the 3-pointers in the decisive fourth quarter and added another back-breaking bucket for good measure.

LeBron James scored 31 points and grabbed 12 rebounds in the Heat's Game 7 win over the Celtics on Saturday, after he had 45 points and 15 rebounds in Game 6 on Thursday. Only three other players have had at least 30 points and 10 rebounds while playing for the winning team in Games 6 and 7 of a playoff series: Shaquille O'Neal and Kobe Bryant did that as teammates in 2002 against the Kings, and Bob Pettit did it in 1961 for the St. Louis Hawks against the Lakers.

James averaged 33.6 points and 11 rebounds per game while making 52.7 percent of his field goals against the Celtics. Only two other players in NBA history have averaged at least 33 points and 11 rebounds per game while shooting at least 50 percent from the floor in a seven-game playoff series: Wilt Chamberlain (38.6, 23.4 and 55.9 percent in the 1964 Western Division finals for the San Francisco Warriors against the St. Louis Hawks) and Kareem Abdul-Jabbar (37.1, 18.7 and 60.7 percent in the 1977 conference semis for the Lakers against Golden State).

10.Dunk Of The Night