MIAMI -- After absorbing a relentless desperation late-game scramble and the accompanying high-volume fans, the Miami Heat were staggered a bit at just what it took to wrestle a single win away from the Oklahoma City Thunder in Game 2.

By the same moment in Game 3, though, the Heat couldn't believe what they were able to get away with and still figure out a way to take the NBA Finals lead.

The Heat were back home and, indeed, that often provides additional leeway but not usually like this, not at this level. Miami took a 2-1 series lead with a 91-85 victory in a game where it: (A) shot 33 percent in the second half; (B) committed nine -- NINE! -- turnovers in the fourth quarter, four of them by Dwyane Wade; (C) shot a horrifying 18 percent on shots outside 10 feet; (D) allowed Thunder stars Kevin Durant and Russell Westbrook to shoot 51 percent. 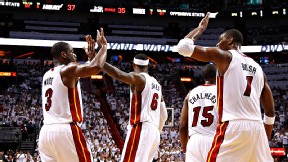 "We've built up some toughness now that we can find different ways to win," Heat coach Erik Spoelstra said. "And we had to."

For all the excitable talent and highlight potential the Heat possess, this choppy playoff run has shown a side of them that was either minimized or underappreciated as they moved through the regular season. For all their changing lineups, inconsistent late-game play and meandering motivation, the Heat have proven to be a team that can manufacture victories. They can win games with force; sure, that's been seen. But it can't be said they're not versatile.

With their scrambling defense that can sometimes resemble the Little Dutch Boy plugging holes as they materialize, to their clumsy but often effective Dwyane Wade-LeBron James offensive back-and-forth, the Heat are right back where they were a year ago. Two wins from a title.

"It really doesn't matter how you shoot," said Chris Bosh, and he meant it. He shot 3-of-12 on Sunday night but had 11 rebounds and came up with some difference-making defensive plays. "We have to play solid, we have to give them one shot, we have to get rebounds. Those are the effort plays and you have to have the energy."

Thinking of the Heat as an "energy" team, a moniker usually reserved for a group that relies more on hustle than talent, is odd. But they are the underdog in these Finals according to the bookmakers and even the naked eye after the Thunder blitzed them in Game 1. And they are playing the way an underdog should over the last two games.

Sunday, James delivered another strong performance, continuing to leave last year's Finals in the rearview mirror with 29 points. But while he came up with eight points in the fourth quarter, including a three-point play that gave the Heat badly needed breathing room and then a free throw with 16 seconds left that clinched it, James' scoring didn't feel like his biggest contribution.

That would be the fire James showed in chasing rebounds, he had 14 of them, including five offensive, and his defense on Durant in the fourth quarter. Durant had been a dynamo late in Games 1 and 2, racking 33 points in those fourth quarters and rewriting the record books for scoring by a player in his first two Finals games. But in Game 3 Durant was just 1-of-5 shooting with James guarding him in the fourth quarter and 2-of-6 overall. He finished with 25 points but this time the fourth quarter, where the game was sitting there for the Thunder to take, did not belong to him.

Wade missed no less than 10 shots in the first half and had a few possessions in the fourth quarter that nearly left him in the goat role. But he also led a Heat comeback in the third quarter, scoring 11 points, and he came up with two huge baskets in the fourth around his turnovers. It was not by any means a masterful performance but, really, what do Wade or the Heat care about aesthetics? After falling behind in the past three series, Miami long since gave up caring about looking regal.

"Last year I don't know if we were experienced enough as a unit to deal with what came at us," said Wade, who had 25 points, 7 rebounds and 7 assists. "This year, no matter what's happening, I feel like we're a more experienced team. I just feel we understand the situations more and we can deal with it better."

Of course, there's two sides to this story. The Thunder, a team that played with relentless aggression offensively in the second halves in Games 1 and 2, lost their way on the road. Durant didn't have his fourth-quarter magic, his team had some unforced and incomprehensible turnovers of its own and coach Scott Brooks made some substitution decisions that were hard to defend.

Namely Brooks took Westbrook, who had 18 points, and Durant off the floor in the third quarter and watched his team blow a 10-point lead. He also played Derek Fisher more minutes (28) than big man Serge Ibaka (23) even though the Thunder appeared to play their best with Ibaka on the court.

Durant was hampered by foul trouble, a sticking point that certainly had Thunder fans grinding their teeth after a few close calls. But both his fourth and fifth fouls were called for classic mistakes. He got caught in the air on a pump fake from Wade and then out of position trying to take a charge from James. They limited his effectiveness as he had to guard against disqualification down the stretch.

But the Thunder scoring the fewest points in 11 playoff games and the Heat outclassing Oklahoma City at the line -- the Heat were 31-of-35 and the Thunder, the league leader during the regular season, went 15-of-24 -- were empirical categories that went Miami's way.

Right now, the series is going the Heat's way, too.

MVP: LeBron James continues to shave away the public perception that he's unable to handle high-pressure games. James finished with 29 points on an efficient 11-23 shooting, pulled down 14 rebounds, and outscored Kevin Durant in the fourth quarter.

Defining Moment: Down four with 16.2 seconds left, Thabo Sefolosha inbounded the ball to Russell Westbrook in the corner. Unfortunately, Westbrook had begun a sharp cut upward, and the ball landed squarely in Dwyane Wade's hands. Wade hit both free throws, sealing the game.

X Factor: Free throws. In a close game late, the free points gifted earlier in the game take on monumental importance. Unfortunately for the Thunder, nine missed free throws -- seven in the second half -- made those final moments that much more difficult.

LeBron James, Heat: Two more wins to a ring for the King. James played a rugged game en route to 29 points and 14 rebounds, and the Heat took a 2-1 lead in the NBA Finals with a 91-85 victory over the Oklahoma City Thunder.

James Harden, Thunder: Going 2-for-10 and missing all four 3-point attempts will not make Miami fear the beard. The only other time in these playoffs he struggled from beyond the arc like this was an 0-for-4 game in the West semifinals over the Lakers.

"Last year, I don't know if we was experienced enough as a unit to deal with what came at us. I just feel like we understand the situations more and we can deal with it better."

Again, for posterity: Miami attempted 19 shots >3 feet from to the right of the rim, and missed all 19. 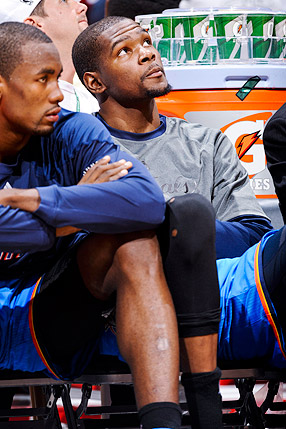 Andrew D. Bernstein/NBAE/Getty Images
Kevin Durant of the Thunder sits on the bench after picking up a fourth foul. The Thunder had a 10-point lead midway through the third, but Durant went out along with Russell Westbrook.

The Miami Heat shot 31-for-35 from the free throw line (88.6 percent) while the Oklahoma City Thunder were just 15-for-24 (62.5 percent) in Miami's Game 3 victory in the NBA Finals on Sunday night. That 26.1 percentage point differential in free-throw percentage was the largest in an NBA Finals game in which both teams had at least 20 attempts since June 6, 2001, when the 76ers shot .920 from the line compared to the Lakers' .556 free-throw percentage in a Philadelphia victory in overtime.

Shane Battier made two more 3-point field goals in Miami's Game 3 victory over the Thunder on Sunday night, giving him 11 makes from beyond the arc through the first three games of the NBA Finals series. Since the NBA instituted the 3-point shot in 1979, only one other player has made as many as 11 3-pointers in the first three games of an NBA Finals series: Orlando's Rashard Lewis in 2009 (11).