These NBA Finals have represented such a changing of the previously established Miami Heat persona that it's striking. Fitting right into that potential tale of redemption was James on Tuesday night, the anniversary of one of his greatest disappointments morphed into what might become one of his greatest triumphs.

The Heat basically cost themselves a title last season with a collapse in Game 4 back in Dallas. James was at the center of it with a dud performance of historical consequence. It may feel like that point is being belabored just a bit a year later but it only serves to act as a contrast for the turnaround James and the Heat are experiencing.

This Game 4 will be remembered not for James disappearing, or "shrinking" as was the preferred terminology of 2011, but instead for him hitting two crucial shots on one leg. The last being a 3-pointer that gave the Heat the lead for good in their 104-98 victory over the Oklahoma City Thunder that pushed them to a 3-1 lead and to the brink of a title. 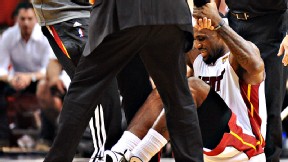 It wasn't exactly Willis Reed; let's get the proper perspective. But James limping off the bench with intense cramps to drill the jumper at the end of the shot clock with two minutes to play was clutch, impressive and improbable considering his jump shot had been on hiatus since his last signature moment of the playoffs, Game 6 against the Boston Celtics.

James had suffered the cramps throughout the second half and it had made him a step slower. But then he collapsed midway through the fourth quarter, falling to the court after his left quad seized up. He was still able to score on a flat-footed shot that broke a tie with five minutes to play but he didn't last. Moments later James had to be carried off the court, causing a gasp from the crowd who feared the worst.

It wasn't serious but the timing sure was, the Thunder were fighting and Russell Westbrook was in the midst of a relentless display of will on his way to 43 points. Losing James at that time was troublesome for Miami to say the least. He would come back after guzzling a bottle of Gatorade and getting stretched to play on one good leg for four minutes. It wasn't awe-inspiring but it was long enough to crush the Thunder's hopes with the crucial shot.

"It's basically like your body just shut down, your legs shut down on you, there's nothing really you can do about it," James said. "I wanted to try to make a play with the limited mobility I had at that time and I was happy I was able to."

This series James has made four baskets in the final five minutes of the fourth quarter with the game within five points. That is the statistical definition of "clutch time." Regardless of that metric, when James' 3-pointer left his hand with the game tied there was no one watching who didn't know it was a huge shot and a significant risk.

Basically, James has been the antithesis of what he was last year when the absence of ability to come through in the clutch triggered 12 months of mockery. Last year not only wouldn't James have delivered in such a moment, he most likely wouldn't have even taken it.

The pressure is just the same and so is the stress. Over the past several days, those close to James say, the intensity of the moment has been wearing on him a little. That might have contributed to the cramping that forced James to the bench for the final minute. But he still was able to have a major impact on the game's outcome, forcing the once-favored Thunder to grind their teeth.

"LeBron hit an amazing shot coming back from his injury," Thunder coach Scott Brooks said. "Sometimes you've just got to pat the guy on the back and say 'great shot' and move on."

Brooks' frustrated concession was quite similar to what the Heat were left to say last year when they were outperformed under the Finals pressure by Dirk Nowizki and the Mavericks. Now it's James' assembling his NBA Finals Most Valuable Player case and the latest file came with his 26 points, nine rebounds and 12 assists.

But it was not all James. It never could be. Wade had 25 points, 15 of them in the second half and he took the keys to the offense with James' ailing in the fourth quarter. Mario Chalmers had one of the biggest games of his career, scoring 12 of his 25 points in the fourth quarter, including a layup and two free throws that provided the final separation.

Heat coach Erik Spoelstra continues to outmaneuver Brooks with his lineups, staying with smaller, versatile players and forcing Brooks to keep one of his big men on the bench. In Game 4, he played Derek Fisher 22 minutes but Kendrick Perkins and Nick Collison just 17 each. The Thunder outscored the Heat when Perkins was on the floor and played them even when Collison was out there. Fisher had no points and no assists.

"I don't understand why we start out the first quarter the way we did [up 17 points] with the lineup we had and all of a sudden we change and adjust to what they had going on," a frustrated Perkins said. "If it ain't broke, don't fix it."

This has been an issue for the Thunder since Game 2 as the Heat have won the rebounding battle and the points in the paint for three straight games, leading to three straight wins. Oklahoma City has failed to score 100 points in all three games, the first time it's had a stretch like that since early April.

"You've got to pick one of [the big men]," Brooks said, essentially admitting the Heat are forcing his hand. "There's only so many minutes you can throw out."

All assembled, though, it adds up to the Heat being a single victory away from a load of vindication. James is closer than he's ever been to a title. He wouldn't be here without the teammates he handpicked in 2010. But more than anything, he has carried his team to this position. One win from finishing the job he started nine years ago and living up to the expectations created when he started showing up on magazine covers at age 16.

Cramps, stress, baggage, expectations, emotions. James is on the verge of losing them all by finally winning.

"Of course it's there to think about," James said. "If we come out with the mindset that we've come out with during the playoffs we're going to give ourselves a good chance. That's all we can ask for."

MVP: Mario Chalmers? LeBron and Wade had huge games but the 25 points from Chalmers on 9-for-15 shooting was so important to Miami pulling this one out. He had 12 points in the fourth quarter to help clinch it.

Defining moment: Russell Westbrook's foul with 13 seconds left. After a brilliant game by Westbrook, he had a lapse in judgment as he fouled Mario Chalmers with the shot clock ticking down. Didn't cost them the game outright but it guaranteed they didn't have a chance to make a comeback.

That was … kind of heartbreaking: Westbrook was truly magical throughout most of this game. He lived in the paint by driving past all of his defenders throughout the game. He had 17 of his 43 points in the fourth. And then he committed one of the worst fouls in NBA Finals history.

Mario Chalmers, Heat: A superior performance from Chalmers, who went 9-for-15 en route to 25 points in the Game 4 win. Russell Westbrook (43 points) could earn this honor even with a loss, but his NBA Finals performance for the ages was soured a bit by his late foul on Chalmers.

James Harden, Thunder: His second straight 2-for-10 performance was very un-Harden-like. Looking ahead, though, if the beard can regain its fearlessness, a Game 5 win would send the series back to OKC where two wins is not out of the question.

"I'll be ready for Game 5. Hopefully I can stay hydrated where it doesn't happen again."

-- LeBron James, on the leg cramps that sidelined him late in Game 4.

The glasses Wade doesn't need will get increasingly elaborate. Next ones will be noise canceling. 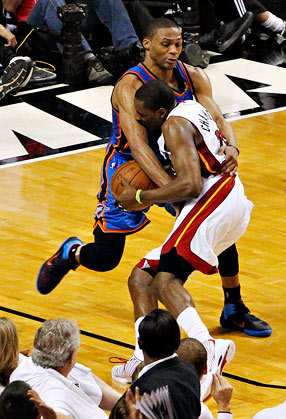 Andrew D. Bernstein/NBAE/Getty Images
Thunder point guard Russell Westbrook intentionally fouled Heat point guard Mario Chalmers with the Heat leading 101-98. Chalmers sank both his free throws with 13 seconds left to prevent the Thunder from getting a chance to tie with a single 3-pointer.

Russell Westbrook scored 43 points on 20-of-32 shooting, plus three free throws, but it wasn't enough to lead the Oklahoma City Thunder to a win on Tuesday. Westbrook is the seventh player to make 20 or more field goals in an NBA Finals game, and he's the first of those players to lose.

Westbrook's total of 43 points is tied for the third-highest in an NBA Finals game by a player younger than 24 years old. Rick Barry had games of 55, 44 and 43 points for the San Francisco Warriors in the 1967 NBA Finals, when he was 23 years old.