MIAMI -- Soaked in champagne down to his squishing socks, LeBron James slumped onto a chair and grabbed his head. About a half-hour earlier, someone had put a hat on it, and for the first time, he took off the hat and looked at what it said.

James had been a spectator for many of these moments, watching champions be crowned for years and then again in reruns. Twice in the past five years he had to see it happen in person, quietly slinking to his locker room as they passed out the hats and shirts, as David Stern marched past him with the gold trophy. It's been a journey indeed for James to be able to say those words. 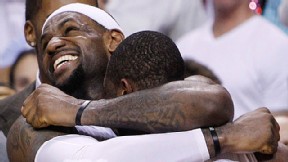 Late into Thursday night, James gathered around with friends and family members who have been with him since he was a teenager: his agents, executives from Nike who took a $100 million gamble on him, his mother and his fiancée and his two sons. There were two emotions in the room. Naturally, there was joy, and there was relief, almost overwhelming relief.

Whatever your position on James, and there will continue to be many, there are two things that became fact when the Miami Heat finished off the Oklahoma City Thunder 121-106 in Game 5. Nine years into his career, at age 27, James has a title. And he earned it.

The past two months haven't been a coronation for the new Finals MVP as much as they've been an acquittal. That's what everything has been about for James since he decided to sign in Miami and then chased that with an end to last season that legitimately shamed him. Not all of it can be washed away with beer and champagne, but James was willing to try.

His 26 points, 11 rebounds and 13 assists in the closeout game represented, by any measure, the cherry on one of the greatest individual playoff runs in history. He averaged 30 points and 10 rebounds during the playoffs; moved to power forward when Chris Bosh missed nine playoff games with an injury; led rallies from deficits in three consecutive series; delivered one of the most dominating games of this generation with 45 points in a road elimination game in Boston; got his first Game 7 victory; set a record for number of playoff games with at least 25 points, five rebounds and five assists; and became the fifth player ever to have multiple Finals triple-doubles. You could go on and on. The summation is that James is a worthy champion.

"Just the playoff run that he's had, I'm really proud to call myself a teammate of his," Bosh said. "It's just been unbelievable to witness."

The difference between the Heat team that came together in the summer of 2010 and the one that stood at the podium Thursday night was vast. The players and personalities were mostly the same, but this team had long since given up on believing getting here would be easy. Fans continue to horsewhip the Heat for the television specials and the parties, and probably always will. But that mistaken spirit perished a year ago on the same court when they were embarrassed not only by the Mavericks but by their own hubris.

"Obviously we all expected it to be a little easier than it was," Wade said. "As much as it hurt, we had to go through that pain and suffering."

There was absolutely nothing flashy about this Heat run through the playoffs. For all their "Hollywood as hell" reputation, this was a patchwork and workmanlike streak that was covered in potholes.

They did the whole thing without a center, rotating in sometimes downright bizarre lineups. Shane Battier, all 215 pounds of him, guarded Thunder center Kendrick Perkins in the Finals and played power forward the rest of the time. He scored 17 points in both Game 1 and Game 2 of the Finals after averaging less than five points per game in the regular season. He made 15 3-pointers in the five Finals games.

Bosh, who finished off the Finals with 24 points and seven rebounds in Game 5, went through the birth of his son, the death of his masseuse and an abdominal injury that required nonstop treatment for three weeks so he could return in time to help the Heat win the conference finals.

Wade had his knee drained a day before Game 3 of the series with the Indiana Pacers and played the next day, pushing the recovery time. It contributed to him playing the worst playoff game of his career but set the stage for a memorable three-game response that carried the Heat to the next round.

Mike Miller played through bulging discs in his back and a bad foot, somehow playing in all 23 of the team's playoff games. He came up with one of the most improbable games in Finals history Thursday, setting a record for a bench player by hitting seven 3-pointers.

And then there was, of course, James. The butt of mockery for a year after his failures under pressure last year, he came up with several of the biggest and most clutch shots of his career during these Finals. First a jumper and two free throws in the vital Game 2 in Oklahoma City that completely changed the tenor of the series. Then a 3-pointer on cramped legs that gave the Heat the lead for good at the end of Game 4, a loss that proved to break the Thunder's spirit. The vote for the Finals MVP was unanimous.

He never danced, he never choked, he never showed disrespect, he never deferred, he never looked scared of the moment. After so many disappointing ends, summers of discontent, falls of hope, winters of expectation and springs of missed opportunities, James did it. And he did it with honor.

"I did it the right way; I didn't short-cut anything," James said. "It's the hardest thing I've ever done."

MVP: LeBron James, by the sheer tidal force of the 28.6 point/7.4 assist/10.2 rebound average line he posted in these NBA Finals -- including 26/13/11 in the clinching game -- didn't just refute the old arguments against his "clutchness," but obliterated them, rendered them ridiculous. Do yourself a favor: Take a minute to appreciate the mastery of the sport we witnessed these past eight weeks. It doesn't happen often.

X factor: Miami's balance. As dominant as LeBron was, the salient aspect of the Heat's championship-securing performance was just how superbly the rest of the roster played. Chris Bosh scored 24. Dwyane Wade dropped in 20. Mike Miller went 7-of-8 on 3-pointers (and Miami hit an NBA Finals-record-tying 14). When the confetti fell, four Heat had broken 20 points, and six reached double digits.

That was ... a beginning, not an end: Two opponents. Equally matched opposites. Their competition fierce, but underpinned less by animosity than respect. You have to go back to Magic Johnson and Larry Bird to find another rivalry like the budding feud we have between LeBron and Kevin Durant and their respective teams. Round 1 went to James, but you get the sense that it was the first of many.

LeBron James, Heat: His first triple-double of 2012 put the exclamation point on the title. His 26 points and 11 rebounds impressed, and his 13 assists helped make Mike Miller's amazing barrage of 3-pointers possible.

That It Ended In Five: For fans of great basketball, this one deserved to go at least six games. The excitement of the series returning to Oklahoma City would have extended the season with a few more sweet days of anticipation. Instead ... well, enjoy the parade in Miami!

"The best thing that ever happened to me was losing last year in the Finals. I had to change."

-- LeBron James, on his yearlong evolution that culminated in winning the NBA title.

Great NBA season. Enjoyed playoffs. Congratulations to Miami & OKC for an exciting Finals. Back to work on next weeks promising Cavs draft.

Steve Mitchell-US PRESSWIRE
In his third NBA Finals appearance, LeBron James got to hold the Larry O'Brien trophy. His team rallied from deficits in three straight series to win.

LeBron James is the first player in nine years to win both the regular-season league MVP award and the NBA championship in the same season. The last was Tim Duncan in the 2002-03 season.

The NBA has had a regular-season MVP award since 1956, and the just-ended streak of eight straight years (2004-11) in which the league MVP did not win the title is tied for the longest such streak over that span. (There was also an eight-year stretch of that type from 1972 to 1979; Kareem Abdul-Jabbar bookended that span, winning an MVP and a title in both 1971 and 1980.)

But that NBA drought is shorter than the current streaks of that type in the NFL and MLB. No regular-season MVP award winner (as voted by The Associated Press) has won a Super Bowl in that same season since Kurt Warner of the 1999 Rams. And no American League or National League MVP has played for that year's World Series champion since Kirk Gibson of the Dodgers way back in 1988.

Before James, the last league MVP in the NBA, NFL, NHL or MLB to win his league's championship in that season was Martin St. Louis for the Lightning in 2003-04.

By contrast, from the 1980 through the 2000 NBA Finals, 11 of the 21 series were won by teams with the league MVP from that season. But it had happened only once since then (Duncan with the Spurs in 2003).