1. With One Project Done, Time For Another

Seated underneath the west basket at the Rose Garden, parked next to the new cantankerous owner his job requires him to cajole, Neil Olshey watched the living affirmation of the process that has taken him this far compete with the clear reminder of the tribulation required to get there.

Two years ago, Olshey took over for Mike Dunleavy as general manager of the Los Angeles Clippers, his first lead gig in the league after working his way up from nearby Artesia High School in the early '90s. In that first season, 2010-11, his Clips also carved out a niche as the fun young upstarts, the team East Coasters had to stay up for lest they miss the latest spectacle by Blake Griffin, whom Dunleavy drafted No. 1 overall a year prior. They graduated the following season, remodeling the franchise as a playoff contender by trading for a top-five player in the league -- perhaps the team's biggest victory to date. 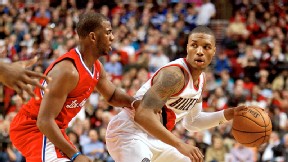 Now the Clippers appear on the verge of taking a next step, only Olshey isn't the one positioning the pieces to get them there. While Olshey bolted L.A. to accept the GM job for the Portland Trail Blazers, the Clippers spent the offseason loading up on accomplished veterans to improve a thin reserve unit. Jamal Crawford, Willie Green, Matt Barnes. They're the type of players title-contending teams are often able to acquire more easily, and, thus far, they've made enough of a difference that title contention no longer seems like such a wild fantasy.

Crawford, in particular, proved as much in a 103-90 Clippers victory on Thursday in his return to Portland.

Like their season, the night was won through the contributions of Clippers core players. Chris Paul had a sterling 21 points on 9-for-17 shooting and six assists, and DeAndre Jordan was again fantastic, following a double-double performance against the Spurs by looking more offensively capable than he has all season (20 points on 8-for-10 shooting, six of eight rebounds on the offensive end) and more confident at the free throw line in perhaps ever (5-for-7).

But when the spunky Blazers stormed back in the fourth, it was Crawford kicking the ladders off of Helm's Deep. Against most of Portland's starting unit, Crawford -- who is coming off a complicated lone season with the Blazers, the displeasure in which the home crowd reminded him of a few times on the night -- scored seven of the Clippers' first eight points in the fourth. L.A. indeed began to take on water thereafter, as its A-for-effort frontline of Ryan Hollins and Ronny Turiaf couldn't slow down Wesley Matthews and Meyers Leonard, who seemingly spent the game's final 15 minutes skying for alley-oops. Suddenly, a 21-point halftime lead dwindled to four with 7:28 left.

But it was enough to hold off the Blazers until the cavalry could arrive. Paul and Jordan checked in immediately, and Griffin soon joined them, and the Clippers were able to secure a victory in their first road game of the season, against the same team that struck one of the first blows to the supposed goliath formed by that other L.A. team.

And although it was perhaps more difficult than it needed to be, the win itself may not be as important as the resiliency the team has displayed of late.

Even though the season is only weeks old, there seems to be a short leash with these Clippers. Maybe it's the club's history of missteps, or maybe it's an L.A. thing. The contract statuses of Paul and Vinny Del Negro certainly don't help. And while so much can go right if things all align, so much can go wrong if they don't. Whatever it is, you almost expect the house of cards to come tumbling down at the first sign of trouble.

But after dropping two in a row at home to the middling Warriors and Cavaliers, the Clippers have shown an impressive resolve, rattling off back-to-back wins, one of which coming against the then-undefeated Spurs. While there are still nits worth picking, including a defense ranked 13th in efficiency coming into Thursday's game, wins against three likely playoff teams (Memphis, L.A., San Antonio) and a road win in a hostile environment can't be overlooked.

Crawford (25 points on Thursday), who has bounced around to six teams in his 11 seasons, has said time and time again how he finally feels like he has a home this season, and his efforts have certainly kept things in order thus far. Olshey, however, is still evening out the foundation. But a familiar blueprint has come in handy.

Much like the Clippers did with Griffin, the Blazers are hoping to build off their own dynamic rookie, Damian Lillard. Olshey grew fond of the Weber State product while still a member of the Clippers staff, and hitched his future with the Blazers to him by selecting him No. 6 overall in June's draft lottery.

Thus far, the GM who stocked L.A.'s point guard depth chart with Paul and the talented Eric Bledsoe seems to have struck gold again. Though only 6-for-13 for 16 points and four assists (to three turnovers) on Thursday, Lillard already seems to be the player most crucial to Portland's offensive success. Already 22, there's a maturity to his game that most rookies do not instantly have. The superb efficiency he displayed in college has also carried over (18.52 PER). And his athletic, assertive forays to the rim have the look of a smaller Derrick Rose. Amongst a crowd of impact point guards, the rookie hailing from a small school in Ogden, Utah, has already carved out his own place.

But as Olshey can surely remind him, the results may not emerge as quickly. While the Blazers have maintained the likes of LaMarcus Aldridge and Nicolas Batum (who, like Jordan, Olshey had to overpay to keep in the fold) through the wreckage of previous regimes, the roster is too thin to truly make any substantial dent this season (Aldridge, Batum and Lillard all played more than 40 minutes on Thursday). Still, with money to spend this offseason and a high draft pick expected, there's reason to hope.

The plan has worked before. Even though it may have stung a bit to see, Thursday certainly made that clear enough.

MVP: DeAndre Jordan. Unquestionably, this was the most complete game of Jordan's career. He started hot, he stayed hot, and he finished hot. And he hit five free throws in a row, which is something I can't believe I just typed

X factor: He stunk up the joint last year, but Jamal Crawford came up smelling like roses in his return to Portland. The Blazers' bench? 20 points. Jamal Crawford by himself? 25 points.

That was ... a struggle: Portland has some interesting pieces in place, but they just don't have enough creators to sustain consistent offensive production throughout a full game.

Defining moment: With 4:16 left and tied, the Bulls had chances: Kirk Hinrich and (red-hot) Deng got open looks for daggers, and Joakim Noah crashed the offensive boards. All to no avail, and Durant inched OKC ahead.

X factor: Turnovers. The Bulls' 21 turnovers led to 20 points. The Thunder actually had 22 turnovers that led to 19 points, but (unlike Chicago) the Thunder usually got those points in immediate transition plays.

DeAndre Jordan, Clippers: What can't he do? Jordan registered his first made free throw of the season after missing his first six over five games. He sank 5-of-7 in the win over the Blazers, part of a 21-point, eight-rebound night.

Portland Trail Blazers' bench: Portland's reserves, averaging an NBA-low 12.8 points per game, had just eight points in the first half while their Clippers counterpart dropped in 25. On the bright side, we saw Meyers Leonard throw down jams.

When D. Lillard watches this game film I hope he learns from CP3 and notice how he got his team great looks at the rim down the stretch.

"I don't give a (expletive) how it was interpreted. It doesn't really matter to me. I'm too old to deal with that stuff. I really am. I've been (Brown's) biggest supporter. So, I'm really too old to be dealing with childish things."

-- Kobe Bryant, reacting to the a YouTube video of him staring down Mike Brown. 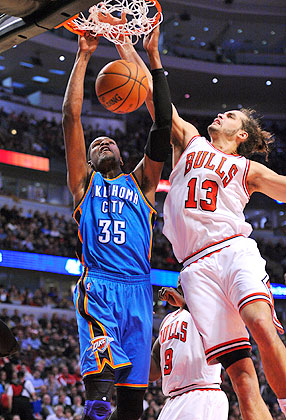 Rob Grabowski-US PRESSWIRE
Kevin Durant could not be stopped by Joakim Noah and the Bulls, scoring 10 of his 24 points in the final period, and the Thunder beat the Bulls.

Ibaka
Serge Ibaka scored 21 points in Oklahoma City's win over Chicago, three shy of the team leader, Kevin Durant, who scored 24 points. Ibaka has never led his team in scoring in 226 career NBA games. This is the third time in his career he has come within three points of the team leader, and he's done so in each of his last two games. Ibaka (17 points) came within two points of Russell Westbrook in the Thunder's previous game, versus Toronto.