1. How D'Antoni Fits With Howard Crucial

LOS ANGELES -- OK, we know Steve Nash will be thrilled with the Los Angeles Lakers' sudden reversal that went from Phil Jackson to Mike D'Antoni. Kobe Bryant was lobbying hard for Phil, but he likes D'Antoni enough that he won't be making McKayla Maroney faces at the notion of getting his second choice. The big question is how this plays out for Dwight Howard, the one whose opinion will ultimately matter most of all.

Howard is the only one of the Lakers stars (you can include Pau Gasol in that group, if you wish) who will be a free agent after the season. With D'Antoni signing a four-year deal to coach the Lakers, Howard is the one who will have to decide if it's the right coach and system with which to spend the prime years of his career. 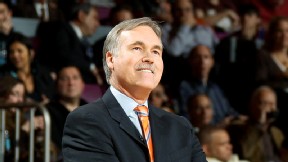 Among other things, Jackson had proven he could win a championship with a big man as the focal point of the team, having done so three times with Shaquille O'Neal and the Lakers. Jackson even did it to the detriment of his relationship with Bryant, by siding with Shaq in the ongoing debate over who should get the ball the most. But Jackson won over Bryant in their second go-round, from 2005-2011, winning two more championships and gaining Bryant's utmost respect. Howard would almost have no choice in the matter; as if the rings didn't carry enough authority, Bryant would be in his ear saying, "Yo, you've got to listen to this dude."

Howard already has a relationship with D'Antoni, who coached him and Bryant on the 2008 U.S. Olympic team and seemed to end that summer on good terms with every player. There were even some fears around the league that the top free agents -- primarily LeBron James and Dwyane Wade -- would gravitate to wherever D'Antoni was coaching.

It turned out that wasn't the case. Wade and James valued playing in Miami, along with a third star in Chris Bosh, under the franchise guidance of Pat Riley. Talent, location and front office stability matter more than coaches. Coaches can always be replaced, as Howard just saw first-hand with the dismissal of Mike Brown five games into Howard's stay with the Lakers.

So it might not be the coach so much as the process of hiring the coach. How much was Howard taken into consideration for this one? How much would he be consulted for the next one? Would the organization make a move without having a primary target ready to move in, as was the case this time?

At the moment, the critical question is whether they hired the right coach to get Howard, Kobe, Nash, the Buss family and every single Laker Girl to the championship? That is the only way the series of transactions dating back to the July 4 acquisition of Nash will be considered a success. That's the only way Howard's time in Los Angeles can be considered a success. Those are the standards set by the franchise and the four Hall of Fame centers who came before him. That is the immense pressure that comes with playing for the Lakers, particularly at the center position.

It's extra pressure on D'Antoni as well, occupying the seat once held by the likes of Bill Sharman, Pat Riley and Jackson (whom the fans were chanting for).

And this roster is drastically different from the squad that had so much success under D'Antoni in Phoenix with Nash running the show. That team operated under the premise of taking the first good shot, playing at a pace that would produce a high number of shots, counting on the fact that the Suns would make a higher percentage of their shots -- particularly the 3-point shots.

These Lakers are older, bigger and slower. It takes more time and patience to allow a big man to establish post position. They don't have the outside shooters the Suns did.

That's not to say there's no place for big men in D'Antoni's world. Shaq averaged 18 points per game during his lone full season in Phoenix. That was only two points off his average during his championship season with the Miami Heat three years earlier.

Can D'Antoni put all the pieces together? Can he get the offense flowing and oversee a defense that gets stops regularly? These are questions that we don't know the answers. It's rare that any coach can provide the answers. Phil Jackson could, which is why he demanded so much money and control. Ultimately the Lakers weren't willing to give him what he wanted. Talks fell apart Sunday night, and while the players were reveling in their victory over the Sacramento Kings the Lakers were reaching out to D'Antoni. The call came "out of the blue," according to a source close to D'Antoni.

That didn't prevent a deal from getting consummated in about the time it takes Dwight Howard to shower, get dressed and meet with the media.

"This organization moves pretty quickly once they have a direction," Bryant observed a little earlier in the night.

Most valuable player: Dwight Howard. There was an inherent advantage from the outset given the Kings' undersized and undermanned frontline, but he did what he needed to do. Howard finished with a third of the team's offensive rebounds, which were crucial to the Lakers' win.

X-factor: There was a pretty big disparity in free throws between the two teams. The Lakers finished with 30 free throw attempts, 14 more than the Kings, and converted on 11 more. That was essentially the difference in score.

That was … inevitable: "We Want Phil" chants first rang out in the second quarter. Obviously to the Lakers fans, and to the organization as a whole, the game was overshadowed by the hunt for a more stable (and successful) future.

Most valuable player: Russell Westbrook. It's a shame he wound up with eight turnovers, because his play was otherwise flawless. He had 27 points on 16 shots, 6 rebounds, 10 assists, 4 steals and 4 3-pointers.

Definding moment: A lot of players -- especially superstars -- forego the end-of-quarter heave to save their field goal percentage. Not Westbrook. He nailed a running, leaning half-courter off the glass to end the third quarter.

X-factor: Free throw shooting. Cleveland didn't shoot its first non-technical foul free throws until under 4:00 remaining in the second quarter. They made just 69.6 percent of their 23 free throw attempts overall, while the Thunder went 19-for-22.

Most valuable player: Wayne Ellington went off for what may end up being one of the greatest scoring games in his career -- 25 points on 8-for-13 shooting, with seven 3-point makes. To put that in context, as an entire team, Memphis only surpassed that many makes in a game six times last season.

X-factor: While LeBron James and Chris Bosh combined to shoot a patently decent 18-for-31 from the floor, the rest of Miami's crew went just 12-45 from the floor. The Grizzlies are a good defensive team, but that was still a bit extraordinary. The Heat compounded their poor shooting by making just 22 of 36 free throws.

That was … dominant: While the Heat made it interesting, the Grizzlies led wire-to-wire and had a strong answer to every Heat run. Ellington spaced the floor beyond any and all reasonable expectations, and the Heat had no real answer on the perimeter. The most complete performance in a long time for these Grizzlies, and a scary game for the rest of the West.

Most valuable player: Maybe it was the matinee start time, but the Clippers were flat for much of the game. Leave it to Chris Paul to realize how to overcome a listless start, turn up the aggression and guide the team home.

X-factor: The Clippers' bench. It was a tight affair before the energy group finally found their juice in the fourth and injected some pace into the game, creating turnovers with hustle and defense.

That was … a rock fight: Neither team could find any offensive rhythm in the first half. Thankfully, Eric Bledsoe and Matt Barnes jolted the second unit awake, getting 3 steals early in the fourth to put the game away.

Most valuable player: Kris Humphries stuffed the stat sheet, finishing with 14 points and 21 rebounds, showing once again why he's one of the best rebounders in the NBA. The 21 rebounds were two shy of his career-high.

Defining moment: The Nets played a crisp first quarter, outscoring the Magic 35-17 in the period. That proved to be the difference in the ballgame, as Orlando couldn't recover from a deficit that was as much as 20 points early in the second quarter.

That was … a chore to watch: After the opening stanza, this game was a bit of a slog. Brooklyn (37.2 percent shooting from the floor) and the Magic (36.1 percent) played a game that was not easy on the eyes.

Wayne Ellington, Grizzlies: The reserve guard came off the bench and sank 7 of 11 3-pointers in 27 minutes, good for a career-high 25 points in the 104-86 win over the Miami Heat. The former Timberwolve in his first season with Memphis is a career 6.6 ppg scorer.

Marcus Thornton, Kings: The reliable supplier of bench offense goes 1-for-10 from the field in the 103-90 loss to the Lakers. Now in his fifth NBA season, Thornton has not had a single game where he has played that many minutes (22) and scored so few points (2).

If I was involved w/ the firing of Mike Brown, I would own it like I did w/ Paul Westhead.

"Obviously I think everyone knows how much I love Mike," Nash said. "If (D'Antoni) were to coach, it would be seamless and terrific for me, and I think the team as well."

-- Steve Nash, on the prospect of playing for his old coach in Phoenix. 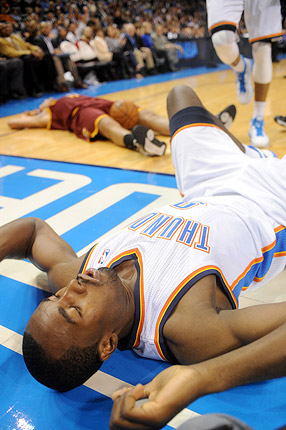 Mark D. Smith-US PRESSWIRE
Thunder forward Serge Ibaka lies on the floor after fighting for a loose ball with Cavaliers center Anderson Varejao. Ibaka got back up to record seven blocks in a 106-91 win for the Thunder.

Wayne Ellington scored 25 points off the bench in the Grizzlies' 10486 victory over the Heat. It's only the second time since the start of the 20102011 season that a reserve from the opposition outscored each of the Heat's Big 3 (considering only games in which James, Wade and Bosh all played). Chris Douglas-Roberts did it for Milwaukee two seasons ago.