DENVER -- This, ladies and gentlemen, is why it can be dangerous to wager on an NBA game.

When the schedule came out last summer, the Miami Heat took a look at Thursday night's game and quietly sighed, probably mentally chalking up a loss. It was to be the fourth game in five nights, the most demanding test any team will face during the season, all of them on the road. The Denver Nuggets, meanwhile, would have two nights off to lay in wait.

Meanwhile, Miami hadn't won at the Pepsi Center since drafting Dwyane Wade. Not when they had Shaquille O'Neal. Not when LeBron James and Chris Bosh joined up. In fact, it had rarely been close. Last season the Heat lost by 13 points. Two years ago they lost by 28. 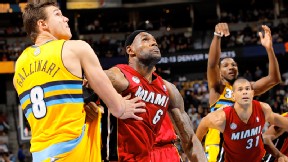 Doug Pensinger/Getty ImagesMiami won in Denver for the first time since 2002.

In addition, Wade was shut down before the game Thursday because of a lingering foot injury. The Heat then lost a second starter in the first quarter when Mario Chalmers went down with a triceps injury.

Nuggets coach George Karl said before the game that he was excited about a rematch with the Heat because he'd made some defensive adjustments he thought would help limit Bosh, who scored 40 points in the latest meeting, on Nov. 3. As it was, it took a four-point play from Ray Allen in the closing seconds for the Heat to beat the Nuggets in that game on their home floor when they were fully healthy.

Denver came in leading the league in paint scoring. The Heat came in without any practice time to deal with their recently porous interior defense, which had been getting torched during their six-game road trip.

About the only odds the Heat looked like they could beat was getting to their hotel before 5 a.m. after flying in from Los Angeles following a loss to the Clippers. Which they did, barely.

As for the game itself, the Nuggets finished with 26 more points in the paint and 19 more rebounds, numbers that would suggest an unsustainable hope for the Heat. Kenneth Faried had a career-high 20 rebounds, JaVale McGee had a season-high 18 points and Andre Miller had a season-high 19 points.

So naturally after all that build up, the Heat ended up with a surprising 98-93 victory over the Nuggets. Is it fair to refer to the defending champs' winning any game as a surprise? Well, had you watched LeBron James labor over the game's last five minutes as he approached his 160th minute since Sunday night and the Heat rely on a 3-pointer from 26 percent career shooter Norris Cole as the clincher, you'd have be surprised, too.

"All we heard is we didn't have a shot and let's go on to [next stop] Phoenix and just let the young guys play," said Shane Battier, who made six 3-pointers and took a key charge late in the fourth quarter. "It's not that we weren't expecting to win, but we played free and loose."

James finished with 27 points, 7 rebounds, 12 assists and 3 blocks. He had eight points in the fourth quarter, making a few jumpers on which he barely got off the court.

"I had to try to find a way," James said. "This is a tough building to play in when you get in at 5 in the morning. This altitude is nothing to play with; I was just trying to find a little bit of energy to make a few plays."

The Nuggets, who are now a surprising 4-5 after a road-heavy start to their schedule, were not able to effectively use their penetration as was expected. They did pile up 50 points in the paint, their stronghold, but point guard Ty Lawson struggled to create clean looks and was scoreless on 0-of-7 shooting. Andre Iguodala had a game largely void of impact.

Danilo Gallinari had two airballed 3-pointers in the second half, including one with 1:05 left that would give Denver the lead. He also failed to chase down a key loose ball a few moments later. It gave the Heat the gaps they needed to pull off the virtual upset.

"I could tell from the walk-through today that it wasn't just going to be showing up and laying down, it was to overcome the odds," Heat coach Erik Spoelstra said. "Everyone was so well aware of what our record was over the last few years here."

MVP: LeBron James. With Dwyane Wade saddled up on the sideline, Erik Spoelstra chose to surround the planet's best player with a small army of snipers, and the results were deadly. Miami shot 13-for-27 from beyond the 3-point line behind James' orchestration. Whether it be from the top of the key or down on the block, he dominated everything yet again. (In a stat line that would drop jaws had it been done by anyone else, 27 points, 12 assists and 7 rebounds sounds pretty good.)

LVP: Ty Lawson. The Nuggets' most important player failed to score a single point in 36 minutes of play. Lawson was unnaturally quiet, taking only seven shots while simultaneously botching the rapid-fire tempo Denver needed to win.

That was ... aesthetic intensity: Everything Kenneth Faried does on a basketball court is appreciated. Against Miami he owned the glass, snatching an incredible 20 rebounds -- 11 offensive!! -- in 36 minutes of action (that last word is meant literally). When the Heat held a 19-point lead midway through the third quarter, Faried's motor was going just as hard as when Denver trailed by a single point late in the fourth. He might be the most consistent player in the league.

MVP: Raymond Felton. With San Antonio (particularly Stephen Jackson) blanketing Carmelo Anthony, Felton assumed the scoring burden, breaking down the Spurs off the dribble, finishing at the tin or finding open shooters to the tune of 25 points, 7 assists and only 2 turnovers.

X factor: Jason Kidd. The Knicks were down 12 with 7:13 remaining, but Kidd's steady hand at the wheel keyed a defense that forced multiple turnovers and shut down Tony Parker while banging home three clutch treys in the fourth, spearheading a 27-11 run to end the game.

That was so ... undefeated: Battle-scarred 'Bocker fans are gobsmacked. Whether it is Anthony unselfishly passing out of double-teams, J.R. Smith playing under control or the Knicks collectively transmogrifying into a smart ballclub, no one saw this coming. Is this the best team in the NBA?

MVP: Despite a 6-for-17 night from the field, Deron Williams dictated the pace of the first half, iced it from the line in the final minute and finished with 24 points and 8 assists.

X factor: Late-game execution. Down the stretch, the veteran Celtics missed free throws and made mental mistakes while the Nets hit just enough shots to pull off the fourth-quarter comeback.

That was ... a promising start: Both the Celtics and Nets are works in progress, but there's an edge to this burgeoning rivalry that promises great things as they learn to dislike each other.

The undefeated New York Knicks: The NBA's lone unbeaten put another pelt on the wall. Raymond Felton led the way with scoring from the point, and huge bench contributions from Rasheed Wallace and J.R. Smith helped deliver a 104-100 win in San Antonio.

Ty Lawson, Nuggets: Goes 0-for-7 from the floor en route to a scoreless night in the 98-93 loss to the Heat. Good thing 36-year-old Andre Miller stepped up and nearly sparked the Nuggets to a comeback win.

Andre Miller turning back the hands of time. Which he invented.

"It's better than doing it halfway through the season, if you're going to do it. For us, we've been struggling, so it's not like we're leaving anything because we never really learned what we were doing in the first place."

-- Kobe Bryant, on the timing of firing Mike Brown and bringing in Mike D'Antoni. 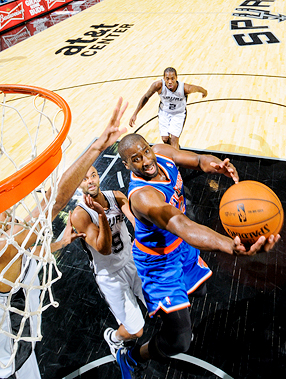 The Knicks preserved their undefeated record this season by rallying from a 12-point deficit in the fourth quarter to beat the Spurs in San Antonio, 104-100. It was the Spurs' first loss after leading by at least a dozen points in the fourth quarter since November 2004, when they squandered a 19-point advantage in the final period in a 96-91 defeat at Toronto.