MIAMI -- Fair or otherwise, LeBron James has had to grow accustomed to backlash in recent years for some decisions.

But the league's three-time MVP shouldn't be faulted for his reluctance Thursday night to step between two of the NBA's most powerful and successful egos amid the debate that overshadowed his Miami Heat's lethargic 105-100 win against the short-handed San Antonio Spurs.

When pressed for his opinion on whether Spurs coach Gregg Popovich should face punishment from commissioner David Stern for deciding to send his top stars home to San Antonio for rest instead of playing them against the Heat in a nationally televised game, James backed a coach he's been fond of throughout his career. 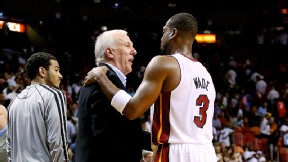 He sided with the right guy.

"I don't think Pop was in the wrong," James said after the Heat barely survived against a Spurs team that was without Tim Duncan, Tony Parker, Manu Ginobili and two other top rotation players. "Pop runs his team how he wants to run his team. He's a great coach. There's nothing you can really say about him. He's done it before, and he has a great feel for his team. And you can't question him as a leader or question him as a coach."

Apparently, Stern has other plans. The hammer has already been swung. Now, it's only a matter of how much damage will be done when the repercussions are announced.

What we know now is they'll include leveling the Spurs with what Stern threatened would be "substantial sanctions" for an "unacceptable decision" to sit their best players. It's likely Stern was embarrassed at the product the Spurs put on the court before a national audience in what was supposed to be a marquee matchup between teams that could meet again in the NBA Finals.

Shortly before the game started with James, Chris Bosh and Dwyane Wade taking on players from the back end of the Spurs' bench, Stern quickly issued a statement through the league office apologizing to fans, and condemning the actions of one of the league's most accomplished franchises and a coach who has a track record of making smart moves.

What Stern actually accomplished was something even more astonishing. He made a sympathetic figure out of an ornery coach who has a brilliant basketball mind but won't hesitate to be condescending beyond belief.

But that hasn't stopped Popovich from coaching the Spurs to four championships since 1999, and leading a model franchise known for its selflessness and consistency. Of course, Popovich could have taken a different approach with his decision to rest Duncan, Parker and Ginobili that would have created far fewer fireworks than exploded Thursday. Had the Spurs sat their aging yet still effective stars Wednesday night in Orlando and flown them ahead to Miami to rest up for Thursday's game, it's likely no one in the league office would have taken issue with the move.

Why? Because when Popovich repeatedly made similar decisions outside of the national television spotlight in the past, he insists he never heard a peep from the league. Now, he's facing a stiff penalty -- not because of what he did with his team, but where and when he did it.

Stern's response Thursday was a knee-jerk overreaction that seemed geared toward pacifying a major television broadcasting partner more so than it was designed to deter the next coach from resting a star veteran for maintenance.

"It's not in the rules to tell you that you can't send your guys here or send them home or whatever the case may be," James said. "But the commish makes his decisions, and everybody else will deal with it."

Heat guard Ray Allen, who made the game-winning shot to beat the Spurs, is familiar with the strategy coaches take when it comes to trying to preserve veteran-laden teams for the long haul of a season. When Allen was in Boston, Doc Rivers' approach was not much different from Popovich's.

What made Thursday strange, Allen said, was that he hasn't seen a coach go to such a maintenance extreme this early. But with the Spurs facing the final stop in a stretch of six games in 10 days, Popovich hinted after Wednesday's win in Orlando that his veterans were wearing down on the road.

"He's paying attention to his guys' body and what they need and what they don't need," said Allen, 37. "Doc was similar when we had opportunities to rest our guys, for sure. The pounding, over time, it's a long season. The good teams in this league want to play until June. So that's where you're measuring a game in November, December and January, and you're like, 'Well, I want these guys to be fresh going into the end of the year.'"

No, Popovich is not without a bit of blame here. He's been known to needle the media and league throughout his decorated career. It wouldn't surprise anyone if he even got a kick out of all the ruckus that was created Thursday.

It's possible some television viewers might have tuned out what turned out to be a surprisingly compelling game between the Heat and Spurs, and instead flipped the channel to Thursday's college and pro football games. The NBA went head to head with the NFL Network's broadcast of the Atlanta Falcons and New Orleans Saints.

That would be a Saints team that knows a little about standing up to a commissioner who doled out heavy-handed punishment in the bounty scandal only to see an appeals process return some accused players to the field.

Popovich declined after Thursday's game to respond to Stern's threatening statement, saying he didn't see it. I wouldn't expect Popovich to do anything other than stand his ground. Considering the way he got Matt Bonner, Patty Mills, Gary Neal and other spare parts to stand up to the Heat, Thursday's actions did more to enhance Popovich's coaching reputation than they did to tarnish it.

Heat coach Erik Spoelstra sees the backlash and debate surrounding the Spurs playing out for at least another day.

"It'll be a great topic, I'm sure, that will be discussed the next 24 hours, whether it's right or wrong," Spoelstra said when asked whether coaches should be scrutinized more by the league for decisions to rest star players. "Every team does it to some extent. I have no idea what their mindset was, and I'm spending zero time trying to figure it out."

Popovich and the Spurs have prided themselves on avoiding the spotlight and flying beneath the national radar.

For a night, at least, they had the league's undivided attention.

Most Valuable Player: David Lee had an eerily quiet but extremely effective night with 31 points (13-for-15 FG), nine rebounds and six assists. For one night, we'll forget about his inauspiciousness on the defensive end.

LVP: After his impressive performance Saturday night, Harrison Barnes was invisible. He had two points on 1-for-7 shooting and played only 17 minutes as Mark Jackson favored the likes of Jarrett Jack and Draymond Green.

Defining Moment: With 3.4 seconds left, Jack fouled Andre Iguodala from just outside the 3-point line. Iggy was in the act of shooting, according to the zebras, but proceeded to miss his last free throw.

MVP: LeBron James. The best basketball player on the planet stepped up late when the game called for it. James finished with 23 points, nine rebounds, seven assists and four steals.

Defining Moment: Once Gary Neal hit a 3-pointer to put the Spurs up five points late in the fourth quarter, James took over and showed why stars are important. The Spurs were on par for 46 minutes of this game, but LeBron owned the final two.

That Was ... Exciting: We'll hear a lot more about this game over the next 24 to 36 hours, but it couldn't have been more different from what everyone expected when we heard the Spurs' starters were headed home. David Stern's threats might have added fuel to the fire.

David Lee, Warriors: Went for 31 points, nine rebounds and six assists for the team with the third-best record in the West. Lee made 13 of 15 shots in a 106-105 win over the Nuggets that was in doubt until Andre Iguodala's 3-pointer at the buzzer was waived off.

That the Spurs lost: Imagine the fun of the Spurs winning and getting "significant sanctions." If Gary Neal had gotten some kinder iron down the stretch, it just might have happened. Either way, an entertaining game.

David Stern reverted to "Homie don't play that" mode w/Spurs. Pop's problem is he did this in a TV showcase game. That's messing w/NBA $

"I apologize to all NBA fans. This was an unacceptable decision by the San Antonio Spurs and substantial sanctions will be forthcoming." 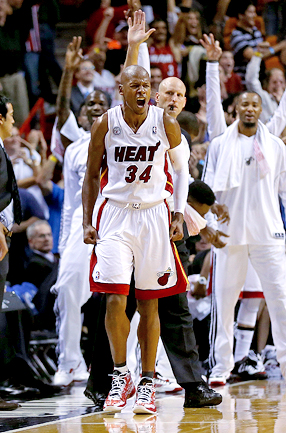 Mike Ehrmann/Getty Images
Ray Allen sinks the 3-pointer, assisted by LeBron James, that sank the short-handed Spurs with 22.6 seconds, giving Miami the lead for good in a 105-100 win.