LOS ANGELES -- The Los Angeles Lakers have gone from the most loaded team to the most perplexing. I spent a long Sunday at Staples Center trying to figure out what the Lakers can do to make this season work, and emerged further from the answer than ever. Mike D'Antoni seemed just as mystified, and he's the guy the Laker honchos said was the solution.

"Ummmmm … we're not very good right now," D'Antoni said, drawing the only definitive conclusion that can be made about this team after a 117-110 loss to the Utah Jazz.

The solution isn't to rev up the tempo, because they're not fast enough to get back on defense. They don't want to grind the game into a possession-by-possession battle, because they have neither the comfort on offense nor the trust on defense to win that way.

They spent more time talking about energy than a conference of nuclear physicists, but on this veteran-laden team who's supposed to provide it? The Lakers were virtually even with the Jazz in "hustle stats," such as rebounds and blocked shots, but the Jazz were able to sprint away to a 19-4 advantage in fast-break points. Their "go" is gone. 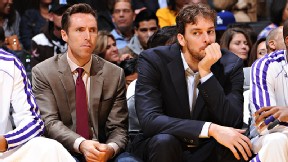 It's not simply about effort, it's about having a sound defensive scheme and a willingness to commit to it. As John Hollinger pointed out, their defense is ranked 25th in the last five minutes of close games, which usually isn't fast-break city. Their rotations are bad, they don't close out on shooters, they leave the weak side unprotected. Whenever Dwight Howard leaves his man to block a shot there's no one coming over to guard the suddenly open player, or to keep him off the boards.

"When I step up, or the next man steps up, the next man has to come over," Howard said. "We've got to help each other. We'll learn how to do it. We're too good of a team to let everything slip away."

Are they that good of a team? Good teams handle business at home, then win about half of their road games. The Lakers are barely above .500 at home, at 7-6. They're 2-6 on the road.

You can say they've let the easy part of the schedule slip away with nothing to show for it. They're a quarter of their way through the season, with the hard part of the voyage still to come. They still have 17 games remaining against the Eastern Conference teams with winning records, as well as multiple games against each of the top four teams in the West.

The Lakers don't seem to want to engage in lengthy discussions about their issues. Perhaps because they know the solution isn't as easy as a solving a simple math problem. Kobe Bryant, who has been extremely quotable on all matters this season, kept his answers to a couple of sentences. Howard, who normally waits until he is completely dressed, lotion applied, accessories in place before he talks to the media, answered questions in his undershirt.

The most significant words came from D'Antoni, who no longer is offering the return of Steve Nash as a remedy, or preaching patience.

It's worth noting that the Lakers have averaged 106.5 points in their past four losses. Also, Bryant remains the top scorer in the league -- although the Lakers are now 1-9 when he scores 30 points or more.

As for the timetable for getting this fixed, apparently look no further than their upcoming four-game trip to Cleveland, New York, Washington and Philadelphia.

They can't keep saying to wait on Nash because by the time he gets here they might have only two-thirds of the season left. He still isn't practicing. There's still no estimated date for his return. They have three off days before their Dec. 22 game at Golden State, followed by a pair of off days before they face the Knicks on Christmas, so sometime in there would be ideal if he can even practice by then. If.

And I'll say it again: Nash's return won't solve the defensive issues that everyone in the locker keeps saying are at the heart of the problem.

But maybe a more comfortable offensive flow would ease their mental burden and help the defense that way. Everyone said their struggles with the Princeton offense were a detriment at the other end of the court. It could still apply as they try to balance D'Antoni's system with a top post-up option in Howard. The offense had a more traditional look to it Sunday, as they dumped it in to Howard and watched the Jazz defense collapse on him. Howard had only 11 points on 10 field goal attempts. At least the Jazz sent him to the line only once, for a pair of free throws.

For curiosity's sake, I watched the Toronto Raptors play the Los Angeles Clippers earlier Sunday to see if Andrea Bargnani coming to Los Angeles in exchange for Pau Gasol would work. First you'd have to get past the notion that if you were choosing sides in a pickup game you'd rather have Gasol. It's not even a salary dump. It's about trying to match a roster to a system. Which makes you wonder about a system that values Bargnani over Gasol.

Bargnani does have a deeper shooting range than Gasol. He just hasn't put it to good use of late. A career 36 percent 3-point shooter, he's at 32 percent this season. He shot 5-for-15 Sunday afternoon in the Raptors' loss to the Clippers.

He also seems more comfortable shooting off the dribble than being a catch-and-shoot guy, which would presumably be his role with Nash kicking out passes to him in L.A. But he'd probably be a better fit as a fourth guy on the ladder, rather than at the top.

It's hard to imagine the answers to the Lakers' problems can be found on a 4-17 team. And it's even harder to believe that record is only five games worse than the Lakers'.

Most valuable player: Mo Williams paced the Jazz with 22 points and nine assists but his game was more than just those numbers. He hit several big shots to stop Lakers' runs and his attacking style on offense set the tone for a Jazz team that took it to the Lakers all night.

Least valuable player: Antawn Jamison's three points on 1-for-6 shooting wouldn't have been so bad if his energy level was high and he played solid defense. But neither of those things were true as the Jazz worked him over in the paint all night. His minus-17 in 16 minutes describe his night perfectly.

X factor: Enes Kanter was simply a monster and turned the tide in the Jazz's favor whenever he entered the game. He shot 6-for-8 from the field and his 14 points were a product of work done right at the front of the rim. If it weren't for foul trouble, his night would have been even more impressive as the Lakers' reserve big men had no answer for his physical style.

MVP: Sure, Gerald Wallace had 16 points and 16 rebounds. More importantly, he dived into the crowd and had a dunk that surely terrified every Buck in the building. The Nets didn't win, but Wallace's intensity and inertia were the only thing that made this game a contest.

Defining moment: Nets made five of their first seven shots to build an early lead. They followed that up by making five of next twenty-five. The Bucks capitalized to create an insurmountable lead.

X factor: Monta Ellis' post game isn't seen that much because of his size, but it's a huge asset when he finds the right matchup. MarShon Brooks wasn't ready to stop Ellis in the paint.

MVP: Eric Bledsoe. On his 23rd birthday, the backup point guard helped the Clippers blow the game out in the fourth quarter with an impressive all-around effort: 14 points, 4 rebounds, 6 assists, 2 steals and 2 blocks.

That was … chippy: From the opening tip, both teams were scrapping and not giving up anything easy near the rim. Matt Barnes and John Lucas III nearly came to blows and were ejected late in the game.

X factor: The Clippers' bench. L.A. held only a four-point lead heading into the fourth quarter, but their second unit quickly changed that. Led by Bledsoe's stellar defense and playmaking, the Clippers ran away from the Raptors.

MVP: Jason Kidd. The Knicks' sagacious addition provided an element of efficient stability (17 points on seven shots to go along with seven assists) in a game teeming with emotional baggage on both sides. Where would New York be without him?

X factor: The Nuggets entered the game leading the league in offensive rebound rate, but Tyson Chandler, Melo and the rest of the 'Bocker big men bodied up admirably, holding Denver to a mere five offensive rebounds, and limiting glass hound Kenneth Faried to zero.

That was … helter skelter: Both teams took turns forcing the other to play to their tempo, resulting in something of a schizophrenic tilt. While not rampant with turnovers (the teams committed only 25 combined), 66 free throws served to stifle what might've otherwise been quite the track meet -- sadly, for the Nuggets, who shot 56 percent from the floor in the loss.

Mo Williams, Jazz: The veteran point man sets the tone in a rare Jazz win in Lakerland. Mo had 22 points on efficient 9-of-11 shooting along with 9 assists (with 1 turnover) in the 117-110 win over the Lakers.

Los Angeles Lakers: While Pau Gasol and Steve Nash heal on the sideline, fresh wounds on the psyche of the Lakers seem to be inflicted nightly. The home loss dropped the Lakers to 9-12.

"I've said that I feel Melo's going to win a championship someday. He's going to figure out that scoreboard numbers and stat sheets aren't important. It's the team scoreboard and intangibles of the game that make winners champions."

-- Nuggets coach George Karl, before his former star led the Knicks past the Nuggets. 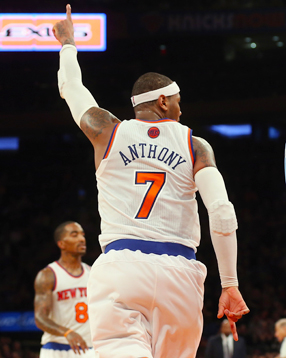 Bruce Bennett/Getty Images
Carmelo Anthony (34 points) pointed the way for the Knicks in his return to the lineup. The Knicks beat the Nuggets 112-106.

For the second consecutive game, all five Indiana Pacers starters scored in double-figures in a loss, this one a 104-93 on the road to the Oklahoma City Thunder. Prior to Friday, the Pacers had won 12 straight games in which all their starters scored at least 10 points. Sunday's 11-point loss to the Thunder represented the Pacers' worst defeat with five starters in double figures since 2008.

Most valuable player: Kevin Durant. The scoring champ started off the game ice cold, but showed up in time to lead the Thunder to a comfortable win over an unexpectedly potent Pacers' offense. After going just 3-for-11 in the first half, Durant made four of his final six shots, running Oklahoma City's offense with surgical precision through the post for the entire final quarter.

X factor: Kevin Martin. As Durant and Russell Westbrook struggled early, Martin came off the bench to light up the night. He scored 22 of his 24 points in the first half -- on seven shots -- to keep Oklahoma City in control until the superstars took over.

Defining moment: When Westbrook checked into the game with 7:41 left to play, his team was up just five. But he soon fixed that by skying to viscously block a two-handed dunk attempt by the 7-foot-2 Roy Hibbert. Hibbert collapsed to the ground, and Russ raced down the court to score at the other end. On Indiana's next trip, Westrbrook stole the ball then stuck a midrange jumper to put the Thunder up nine and squash all hope Indiana may still have had.