NEW YORK -- Over the past few weeks, numerous New York Knicks players and their head coach have started a bit of a grassroots campaign for Carmelo Anthony to get most valuable player award attention.

They bring it up on their own in interviews, they attach "MVP" as an adjective to various accomplishments and they slip it into clichés. It's a little early for such talk, and the Knicks have enough veterans to know that. But the point may not be an appeal to voters but perhaps to Anthony himself: They want him to keep doing what he's doing.

The Knicks are not a team without flaws, and there are questions as to whether they can continue to make 3-pointers at a historic level. One thing is not in question, however. Right now the Knicks don't just have a difference-making offensive player to pair with Anthony, but they appear to have put the pieces around him to transform themselves into a legitimate contender.

Put them in a close game on the road -- a crucible that divides good teams and great teams as the season progresses -- and the Knicks have everything they need. 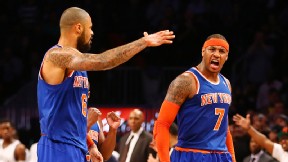 That was the message that emerged Tuesday when the Knicks won an emotional come-from-behind game against the Brooklyn Nets, 100-97. It was not unlike what they displayed in close victories they pulled out during the last week against the Charlotte Bobcats and Denver Nuggets.

Anthony did the heavy lifting, and he got help from a few teammates. Better put, he was willing to let a teammate or two to help him instead of playing hero ball and taking his chances, the unsatisfactory percentage rut that was the basis for all the Jeremy Lin-Anthony angst that dominated some of last season.

Last week in Charlotte, it was big baskets by Tyson Chandler and a clincher, albeit an ugly one, from J.R. Smith. Sunday, against Denver, it was Steve Novak starting a comeback with two 3-pointers before Anthony finished it off. Tuesday, Anthony had a brilliant 45 points on just 24 shots, the sort of efficiency that has often seemed out of reach for him, and he gave up the ball on the last possession, leading to a Jason Kidd game-winner.

"He doesn't get the credit he deserves for making the right plays, and he's been doing that all season for us," said Kidd, who was found wide open after the Nets were caught in rotation as they tried to help on Anthony with 24 seconds left.

"I mean, 45 points, he had every right to hold the ball and take the last shot."

Let's not brand Anthony an equal opportunist just yet. On a vital possession in the final two minutes the Knicks had a five-on-four on offense after Gerald Wallace was down at the other end and stayed sprawled on the floor. Anthony went one-on-one, leaving the rest of the team four-on-three. But he nailed the 15-footer to give the Knicks the lead because, well, he's pretty good at that, too.

Nonetheless, with players like Chandler, Kidd, Novak, Smith and even Raymond Felton -- who had a miserable all-around game Tuesday but came up with three important assists in the fourth quarter  Anthony has a core from which he's getting dependable support.

It's also proving to be a rather good defensive unit. The Knicks have dropped in the rankings from their excellent early start on defense -- they're now in the bottom half in field-goal percentage defense and the Nets piled on 53 percent shooting -- but they have shown they can get stops when they need to. With Chandler at the back, Kidd an expert on the wing and Anthony occasionally showing some defensive interest, the Knicks have the ability to tighten up and hold a team like the Nets to 36 percent shooting in the fourth quarter.

"Games like this, these are the games we've got to win," Anthony said. "We claim to be a good team -- a great team -- and good teams win games like this, on the road in a tough atmosphere."

It can be easy to dismiss it saying the Nets were without Brook Lopez, and that's true. Without Lopez, the Nets are now 1-5 this season and they've lost the past five games that he's missed, sending their once strong start into a quagmire. They were especially bitter after this loss, blowing a 17-point first-half lead when they simply couldn't stop Anthony in the second half.

You can also dismiss fourth-quarter execution against teams such as Denver and Charlotte as well, if you so choose, branding them as less-than-stellar opposition. But the Knicks have their statement wins: two over Miami, one in San Antonio and Tuesday night's in Brooklyn. If they want to be around at the end, though, they'll need to win more games like the one against the Nets.

Seeing the way Anthony and his teammates have been getting it done, that road map is starting to take shape.

"Melo's a guy that gets us over the hump," Chandler said. "And the rest of us make a few plays and we win."

Most valuable player: Kyrie Irving is back in a big way. The Cavaliers' offensive catalyst finished with 28 points, 11 assists and 6 rebounds. More importantly, he had a handful of crucial buckets during a closely contested final period.

X factor: C.J. Miles has been suffering through a miserable season, but he was scorching Tuesday night. Miles posted 28 points while shooting 5-for-10 from beyond the arc and mixing in a few nifty finishes around the rim.

That was … exhilarating: The duel between Irving and Kobe Bryant was fun to watch. The vet and the youngster carried their respective offenses for long stretches, and the fourth quarter was a showcase of both players' inestimable scoring ability.

MVP: Carmelo Anthony. In perhaps his most efficiently brilliant performance wearing the orange and blue, Melo channeled his inner King -- as in childhood hero Bernard -- to the tune of 45 points on 15-of-24 shooting from the floor. And so the legend grows.

X factor: Jason Kidd. On a night when Raymond Felton (3-of-12 from the field) again let the glare of a marquee matchup get the better of his game, Kidd's season-high 18 points (to go along with six boards and six dimes) and go-ahead 3-pointer were once again indispensable.

That was … rivalry-spawning: A quick start out of the gate, a chip-away comeback, star superlatives, testy fouls, a raucous crowd -- this one had it all in spades. With a full eight days to let this one stew, you can bet Brooklyn will be in a full-on boil when it heads to the Garden next Wednesday.

X factor: Numbers game. The Bulls were suffocating in the half court, as per usual, but Chris Paul and the Clippers feasted on transition chances when the odds were more in their favor.

Least valuable player: Luol Deng. The Clippers loaded up on the strongside, leaving plenty of open looks for Deng and Marco Belinelli. Although the Bulls hit a season-high 10 3-pointers, Deng finished 3-for-14 with four turnovers.

That was … punishment: The Bulls failed to make the Clippers pay for some shoddy rotations and bad pick-and-roll defense, but the Clippers didn't return the hospitality, punishing the Bulls with momentum-altering dunks off turnovers.

MVP: Ty Lawson had 26 points, and when he scores in that range, it's often due to hot 3-point shooting. But he shot just 1-of-2 on 3-pointers Tuesday night and instead drove to the lane at will. As Detroit's defense helplessly collapsed on him, Lawson also picked up seven assists and no turnovers.

X factor: Because you can't have one without the other, Andre Miller's alleys and JaVale McGee's oops. The Pistons took an early 21-4 lead, but Miller had six assists in his first 15 minutes, the last three of which were to McGee. Together, they put the Nuggets' offense on track.

Defining moment: The Nuggets led by just four points with two minutes left when Danilo Gallinari received a ball screen. Jason Maxiell switched off Gallinari and Brandon Knight hedged for a moment, but Knight fell for a fake pass and left Gallinari wide open. Gallinari made the wide-open 3-pointer, giving the Nuggets a 96-89 lead and plenty of cushion.

Carmelo Anthony, Knicks: Anthony poured in a season-high 45 points on 15-of-24 from the floor in New York's comeback win in Brooklyn. In two games against the Nets this season, Anthony has combined for 80 points and 18 rebounds.

L.A. Lakers: If you told us Kobe Bryant would score 42 points, Dwight Howard would pull down 20 boards and the Lakers would lose, we'd call you crazy. But this is the 2012-13 Lakers, and crazy doesn't begin to describe it. It won't get any easier, as a trip to Madison Square Garden looms for L.A.

New York has a new mayor tonight. His name is Jason Kidd.

"When things get hard, you should get more determined, not shake your heads. It just seems when it rains it pours. It's like this cloud is following us around at all times. I'm one of the fastest guys on the team -- and I'm like 50. What does that tell you?" 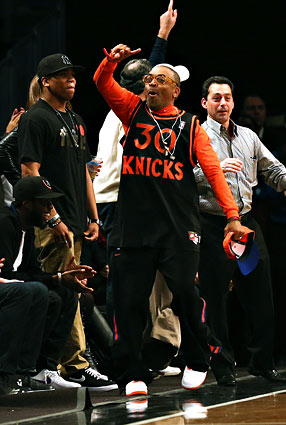 The Los Angeles Clippers defeated the Chicago Bulls for their seventh straight win. It's their longest winning streak since Danny Manning, Ron Harper & Co. won eight in a row in November-December 1991. Prior to Tuesday night, the only other NBA team that had not fashioned a winning streak of seven or more games over the previous 20 seasons was the Charlotee Bobcats, who did not debut in the league until 2004.

Most valuable player: Jordan Crawford's season-high 26 points -- on 24 shots -- gave the Wizards their third victory on the season. Thrust into the starting lineup with point guard A.J. Price injured, he also delivered 6 rebounds, 4 assists and just 2 turnovers. With about nine minutes left and the Wizards down 62-61, Crawford did his best to seize a dull game, becoming responsible for Washington's closing 16 points, dishing two assists and scoring the rest.

Least valuable player: Ryan Anderson torched the Wizards in the first half with 17 points (3-for-5 from long distance) and 7 rebounds. In the second half, he played 18 minutes and didn't score a single point, missing all seven of his 3-point attempts. What happened? Hard to tell. Washington certainly paid more attention after intermission, but the future Pelican also missed plenty of open chances to make a splash.

That was … both teams playing down to each other's level: Washington gets its first road win of the season, giving these two bottom-feeders a combined 8-30 record. Both teams also combined to miss 109 shots (32.7 percent shooting). But when Jordan Crawford and Austin Rivers are the only two on the court who can create their own shots, we turn to this semi-famed Crawford saying: "That's how it always go."

-- Kyle Weidie, Truth About It