NEW YORK -- With his voice sullen to fit the mood of another dour losing locker room, Steve Nash summed up the feelings of so many who have been left bewildered by what's happened so far to the Los Angeles Lakers.

"You look at how great this roster should be and [say,] why aren't they that way?" Nash said.

That "why" has developed into an enigma that has been the most compelling adventure so far this season. The riddle could go something like this: When does a no- brainer actually become a no-brainer? 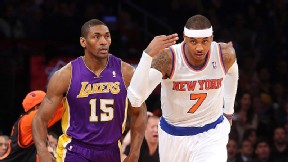 Bruce Bennett/Getty ImagesMelo kept the reeling Lakers on the ropes.

With a splashy offseason the Lakers pulled off some moves they themselves could barely believe. Now staring a 9-14 record in the face -- after a 116-107 loss to the New York Knicks Thursday -- they might be examining whether they should've believed.

Ask any league executive: If Nash called up and said he wanted to come to their team, they'd say to make that deal quickly. The Lakers did, for nothing but low-value draft picks and a measly trade exception. A no-brainer.

Ask any general manager if they would've swapped out Andrew Bynum and his history of knee problems for Dwight Howard, back surgery or no, and they make that deal in a second, too. Another no-brainer.

Say you're Mike D'Antoni and you're sitting on your couch after a knee operation when the Lakers call and offer you a coaching job. Even though you feel your lack of a real training camp and time to implement new players led to failure the season before with the Knicks, you jump right in with the Lakers with no training camp at all and try to install everything on a more ridiculous timeline than the lockout season.

Yet another no-brainer. All of these could-haves are simple, it's the should-haves that are popping up like thorns.

The Lakers aren't winning right now because they've got injuries, because they don't fit so well together and because they haven't found a symbiosis with their coach. One of these things is not under their control; the other two very much were but were cast aside for the sake of making moves that seemed liked they just made too much sense not to do them.

The Lakers believe that when Nash and Pau Gasol return and Howard starts moving like a 27-year-old and not a 37-year-old, it'll all fall into place.

"We have some key pieces that are out; when they come back, we'll get this thing locked and loaded," Kobe Bryant.

That makes sense, like those summer trades, but is it actually logical? Seeing how this is going, it's curious if all these no-brainers do all fit together.

What's been happening on the floor speaks for itself. Now consider what they're all saying about it. All of these things were said within moments of each other Thursday night:

D'Antoni: "We have our schemes in place."

This back-and-forth with Howard:
Q: Do you feel comfortable in the offense right now?
A: When they call on me, I'm ready.
Q: Is your role clear-cut?
A: Is my role clear-cut? Uhh, we'll see.
Q: How are you most comfortable being utilized right now?
A: How am I most comfortable? Give me the ball.
Q: Where?
A: What do you mean where?
Q: Where do you want the ball?
A: That's obvious, on the block. Where else? I'm not a 3-point specialist.
Q: Pick-and-roll? Dive?
A: On the block.

Not five minutes earlier, D'Antoni said this: "We're still not doing our pick-and-rolls, and that for us is a big staple of what we do, and we've got to be able to solve that problem because Dwight has to be that guy forcing that and we're not there yet."

This is the definition, of course, of a mess. To say they're not on the same page is, well, obvious. Does it change when the injuries heal? At one time that might have seemed like one of those no-brainers.

"Hopefully I can help create opportunities for my teammates and make it a little easier," Nash said, being careful but now also realistic.

Gasol and Howard have no history of success together. Nash and Howard seem like a dream pick-and-roll partners with a pick-and-roll coach calling the plays. Only Howard seems wants the ball on the block and their teammates aren't fitted to complement pick-and-roll action because there's a lack of proven shooters.

Bryant is now talking about doing more, but how can he? He's averaging 29 points, his most in six seasons, and shooting 48 percent, which would be his best ever. He wants to act like a striker in soccer, to have the ball more to set up teammates. But is that a good thing? He's already averaging 3.8 turnovers, his highest rate in eight seasons, and turnovers are one of the things that are killing the Lakers.

Talent rules in this league and the calendar is meaningful; the Lakers have both in their favor. But there's no doubt assumptions have given way to hoping.

"Hopefully it'll work out," D'Antoni said. "But we've got some work to do."

MVP: Damian Lillard. The rookie put up a career high 29 points, 7 boards and 6 assists; given the competition, this was almost certainly his best game as a pro. The past few games have been doldrums in Portland, but on this night, fans can be forgiven for thinking ahead.

X factor: Luke Babbitt. Babbitt was aggressive and confident throughout, ultimately providing the Blazers with 12 points on 5-for-10 shooting. The numbers won't dazzle, but his willingness to provide some scoring from the bench goes a long way for a Portland team that sorely needed it.

That was … invigorating. Though the Blazers gutted out a win against the Raptors on Monday, the past few games have been the sort of grind that can unsettle a young team. The Blazers didn't take the Spurs' best shot, but I'll bet they won't mind picking up their best win of the season.

MVP: Carmelo Anthony. For once, the chants of "M-V-P!" that inevitably rain down in a home team's arena don't seem wholly premature. Carmelo has been Bernard King reincarnate, down to the absolute panic all of Knick Knation feels holding its collective breath waiting to see how badly he sprained his ankle in the third quarter via a hard foul from Dwight Howard.

LVP: The Lakers' defense. They can't defend the pick-and-roll, get back in transition, close out on 3-point shooters or stop dribble penetration. For all the anecdotal (and mainly false) historical narratives about Mike D'Antoni's teams' lack of resistance, the absence of speed, size and overall effort would make it hard for Tom Thibodeau to cobble together an effective defense. They're a mess.

Defining moment: Los Angeles had managed to whittle a 26-point Knick lead down to a mere 6 with 1:27 remaining, but after Raymond Felton missed two straight off-balance jumpers, Tyson Chandler dominated the offensive glass with two consecutive trademark backtaps to allow New York to control the ball for a game-sealing 1:09 of play.

MVP: Devin Harris. In what was his best game of the season thus far, he scored 20 points on 7-of-11 shooting, dished out 4 assists and drilled 3-pointer after 3-pointer to bury a helpless Charlotte defense. After a rough start to the season, Harris has steadily improved his production and finally broke out for a big game tonight.

X factor: It was a combination of atrocious defense from Charlotte and excellent marksmanship from Atlanta. The Hawks shot 14-for-29 from beyond the arc and saw contributions from a number of different players, including Harris, Lou Williams, Kyle Korver, DeShawn Stevenson and even Josh Smith. The Hawks produced open looks for their shooters all night, and the shooters did just what they were supposed to do.

That was … pitiful: At least for Charlotte. They've now lost 10 in a row and their defense couldn't stop a squirrel from eating an acorn. Ivan Johnson beasted all over them. Al Horford swatted everything in the paint. Josh Smith did what he always does. The Bobcats just can't produce in the interior and they can't defend anything inside or out.

Damian Lillard, Blazers: The rookie put up a career-high 29 points in a 98-90 win over the West-leading Spurs. Lillard also had 7 rebounds and 6 assists, bouncing back strong after a subpar game against the Raptors.

Charlotte's double-digit losing streak: Just when you thought it was safe to wade into a Cats box score again, Carolina's team hits the skids. After absorbing a tenth straight loss, a 113-90 drubbing by Atlanta, we might just want to look back at the double-overtime win at Washington on Nov. 24 that pushed the Cats to a heady 7-5.

Southwest Division gets tougher again. Congratulations @johnhollinger! This does not get you out of your @SloanSportsConf responsibilities.

"I wish we had the Washington Generals on our schedule."

Debby Wong-USA TODAY Sports
Lakers center Dwight Howard managed 20 points on 8-for-11 shooting against the likes of Rasheed Wallace and the rising Knicks, but it wasn't enough to halt the Lakers' slide.

Anthony
Carmelo Anthony scored 30 points in 22:55 before leaving with an ankle injury in the Knicks' 116-107 home win over the Lakers. No New York player had scored 30-plus points while playing fewer than 24 minutes since Johnny Green (33 points in 22 minutes) in a neutral-site contest against the San Francisco Warriors in Philadelphia on Dec. 30, 1964.

Knicks head coach Mike Woodson discusses his early success in New York, what he's taken from coaches like Larry Brown and Bobby Knight, and on getting his team to buy in.