1. After Finals, Paths Of Heat And Mavs Split

DALLAS -- It's been only 18 months since the Dallas Mavericks defeated the heavily favored Miami Heat to be crowned NBA champions.

"That feels like a decade ago," Miami coach Erik Spoelstra said.

Imagine how the Mavs feel, especially after the Heat rolled to a 110-95 rout that was a heck of a lot more lopsided than the final score indicated Thursday night at the American Airlines Center.

It's ridiculous to call this game a 2011 Finals rematch. 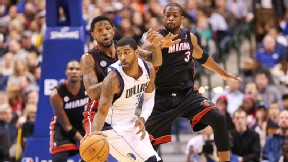 Kevin Jairaj-USA TODAY SportsO.J. Mayo and the Mavs were no match for Miami.

Dallas' lightning-in-a-bottle title team has been dismantled, leaving forward Shawn Marion as the lone healthy Maverick who played a minute in that postseason and the franchise's dozen-year playoff streak in jeopardy. The Heat, fresh off the 2012 title, look like a team that has a legitimate chance to become the dynasty everyone envisioned during the dance party that doubled as a news conference following "The Decision."

Mavs owner Mark Cuban, whose recovery from passing a kidney stone spared him the pain after watching the Mavs' nationally televised misery from his normal baseline seat, made the business decision to let key members of the franchise's first championship team leave in free agency.

The thought process was to create enough salary-cap space to sign a "big fish," to borrow GM Donnie Nelson's term, who would allow Dirk Nowitzki to age gracefully as a co-star. The reality right now is that Nowitzki has been sidelined all season, forced to watch free-agent leftover O.J. Mayo try to put the mediocre Mavs on his shoulders as a Dallas rental player while resuscitating his career.

The Heat, on the other hand, have continued building.

Miami has added some fine complementary players the past couple of offseasons, such as Shane Battier, Mike Miller and Ray Allen. And the King James-Dwyane Wade-Chris Bosh core has developed the kind of chemistry the lone-star Mavs used to beat the Heat not too long ago.

"We're a much better team than we were in the Finals," James said after putting up 24 points, 9 rebounds and 5 assists despite spending the fourth quarter clipping his fingernails on the Miami bench. "We're very comfortable. We know each other. We can close our eyes and know where each other are going to be offensively and defensively.

"That's why we were able to win a championship that we did last year and play the basketball that we're playing right now."

"They're so much better now just because they've been together," Carlisle said. "And there's a lot to be said for being together. Right now, one of our struggles is that we've got a group that hasn't been together much. There are times that it's very challenging."

Not that it's been all roses this season for the reigning NBA champions. The 17-6 Heat have had some challenges this season, too.

The Heat have been humiliated twice by the East-leading New York Knicks, who just so happen to feature key Mavs championship cogs Tyson Chandler and Jason Kidd. The Heat's second blowout at the hands of the Knicks came a couple of nights after Miami lost to the lowly Washington Wizards.

"You don't want to necessarily point to the past experience and assume that it will happen again," Spoelstra said. "You have to make it happen."

At least the Heat have legitimate hope to make it happen.

The 12-14 Mavs, meanwhile, are just trying to keep their heads above water until Nowitzki is ready to make his season debut in a week or so. With the 34-year-old Nowitzki, the Mavs might have a chance to claim one of the West's final playoff spots, but this team hardly resembles the squad that won the title two seasons ago.

"The decision they had to make was probably the toughest they had to make as an organization," said Wade, who went through a rebuilding process after dominating Dallas in the 2006 Finals. "But they're making it for the future of the team. You understand those things, even though it's hard as players. You get it. It's just the way of the world.

"Obviously, when you come off a championship, you would love to keep the core of your guys together for many years and get the opportunity to do it again."

MVP: Andrei Kirilenko. Is it weird to pick the guy who scored nine points on 3-for-10 shooting and fouled out in the fourth for MVP? Especially when his mark, Durant, went for 33. Perhaps, but this win wouldn't have been possible without Kirilenko harassing and frustrating KD down the floor.

That was ... gritty. After a flashy first with 30 points, the Wolves were actually outscored in every quarter for the rest of the game, yet did enough defensively to hang in there and snap the Thunder's 12-game winning streak.

X factor: When J.J. Barea came off the bench in the fourth, it was at a moment when the Wolves were struggling to generate offense. With the Thunder switching on everything, Barea feasted on his matchups against bigger men on the perimeter, going 3-for-4 from downtown and putting the team on his diminutive shoulders.

MVP: LeBron James finished with 24 points, 9 rebounds and 5 assists, doing such a thoroughly dominating job in the first three quarters that he was able to watch the entire fourth from the bench.

LVP: Chris Kaman had no purpose on the court tonight. He knocked down a few jumpers, but his cement feet pulled the Mavs defense apart from the inside-out. He played 19 minutes, during which the Mavs were minus-27.

X factor: The Heat's perimeter defense was stifling, swarming ball handlers and choking off penetration. When Dominique Jones or Darren Collison did make it past the first line of defenders, they were met at the rim by additional barriers, just as stout.

MVP: J.J. Hickson's 18 and 18 didn't come pretty, but on a night when neither team could hit anything, the dirty work was much needed. Many have been waiting for the other shoe to drop and Hickson's production to tail off this season, but at some point fans will have to admit that he's been playing like a maniac.

X factor: Just games after the Blazers set an all-time league mark for 3-point futility by shooting 0-for-20 from behind the arc in the Rose Garden, the Nuggets came in and bested it by going 0-for-22. Depending on your perspective, the Rose Garden is either cursed or blessed, since the Blazers have somehow won both games involving the record.

That was ... wearying: The Blazers played without LaMarcus Aldridge, and the Nuggets did not hit a jump shot outside the paint until less than a minute was left in the game. The Blazers are proving themselves tough, lucky or some combination of both, as they've won a few of these slugfests in a four-game home winning streak.

J.J. Barea, Timberwolves: The former Mavs guard reminded us why he was such a dangerous component of the 2011 champions. He scored 14 of his 18 points in the fourth quarter to lift the Timberwolves to a 99-93 victory over the Thunder.

Nuggets' 3-point aim: The Nuggets hoisted 22 3-pointers, missing every single one in a 101-93 loss to the Blazers. This set an NBA record for most attempts without a make. Andre Iguodala had more than his fair share of misses, hoisting six that did not find the mark.

Me and the Heisman tonight after the game. Cool dude! #johnnyfootball. By the way, look at ol buddy in the right corner.Lol! http://instagr.am/p/TfPHgPiTEL/

"Whatever day he returns will be Christmas, so I guess there's that."

-- Lakers coach Mike D'Antoni, on the projected return of Steve Nash, who practiced on Thursday. Nash is trying to come back from a broken left leg.

The Timberwolves upset the Thunder on Thursday night, ending both Oklahoma City's 12-game winning streak and Minnesota's drought of 12 consecutive losses to the Thunder.

The Timberwolves became only the third team in NBA history to in one game snap both an opponent's single-season winning streak of 12 or more games and its own losing streak of at least 12 games versus that same franchise. The others were the 1959-60 Cincinnati Royals (against the Boston Celtics) and the 1995-96 Washington Bullets (versus the Seattle SuperSonics).