PHOENIX -- It wasn't long ago that the Suns were the fun contender with the all-world point guard, high-flying power forward and most entertaining style in the league.

We all know how that went come playoff time, but during the regular season the Suns made a habit of ripping off winning streaks like the one the Clippers are currently on after winning their 13th straight in blowout fashion, 103-77 Sunday night in Phoenix.

Now it's the Clippers' turn to toy with the league with alley-oops, fast breaks and 3-pointers as they did Sunday to turn a three-point game midway through the second quarter into a laugher.

"Everything they wanted to do, they did it, and everything we tried to take away, we didn't," said Suns guard Jared Dudley.

This is the kind of thing the Suns used to do to Los Angeles throughout a 10-game home winning streak against the Clippers dating back to April 2007.

Throughout the past season and a half, it seems the Clips have ended a long losing streak on the home floors of every former good team in the league, but after this defeat Phoenix head coach Alvin Gentry uttered words that may have never been said about a Clippers team.

"That is the best team we've played," Gentry said. "They're deep, they've got all the ingredients to be a championship team. They've got a great leader in Chris Paul, a tremendous player in Blake Griffin, they're deep off the bench, they're very good defensively, they're very athletic.

"Don't know a weakness that they have, really. They're a tremendous team, and they played like it, 13 in a row. I don't know what else needs to be said. They're a really, really good team."

Championships are not won in December on the home floor of lottery teams, but it's easy to see why Gentry could not find a chink in the Clippers' armor.

They drilled 11-of-21 threes while holding the Suns without a 3-point make in eight attempts through three quarters when this was still a game. They snatched 12 steals to create open court opportunities, and they received superstar performances from Paul (17 points, 13 assists) and Griffin (23 points, 11 rebounds) as well as the super sub Jamal Crawford (22 points on 12 shots).

The Clippers' bench made sure the team did not miss a beat when the starters sat as they have done throughout this winning streak, and the scary thing is it will only get better when Chauncey Billups and Grant Hill return from injury.

"Overall, just a nice team effort," said Clippers head coach Vinny Del Negro. "Got a nice performance from Blake and Chris and Jamal, but it was a total team effort as always."

With the victory the Clippers have not only extended their franchise-record streak and surpassed Oklahoma City's recent 12-gamer for the longest win streak this season, they've also now won six straight road games for the first time in franchise annals, passing a five-game road win streak set by the 1974-75 Buffalo Braves.

The way the Clippers are playing, they will continue to challenge Elias to research obscure records they are breaking since the Clippers have not been the talk of the league since, well, ever.

Yet, as the former powerhouse they beat Sunday can tell you, all the regular-season runs in the world don't mean anything in the playoffs when the tempo slows down, rotations shorten and you are guaranteed to run into a savvy veteran team that won't be impressed by your aerial display.

The Suns could also serve as a cautionary tale for these Clippers. It did not take long for the Suns to go from the team that made basketball fun again to a squad with no franchise player and no chance to legitimately compete in the short term. Basketball isn't quite so fun anymore when Goran Dragic is your cornerstone and you rely on Shannon Brown and Dudley to be main scorers.

For now, the Clippers aren't concerned with streaks or what the future might hold.

"We're just taking care of business right now," Griffin said. "To be honest, we're not really concerned with, 'you haven't won here since then' or 'you haven't won this many game in a row.' We hear it all, but we're about just getting these wins, and if they come within a streak or when we haven't won somewhere, that's fine. It's more about the way we play and how we execute."

If the Clippers continue to play and execute like they did Sunday, this 13-game winning streak won't be their last impressive run of the season.

Michael Schwartz's work appears regularly on Valley of the Suns.

MVP: Carmelo Anthony. After a lackluster performance to start the game, including a particularly rocky stretch during the second in which he missed eight in a row and uncharacteristically settled for long-range two-point shots, Melo erupted, rattling home 19 of the Knicks' 23 points in the fourth quarter, including all 11 in the final 1:53.

Defining moment: With 3:03 to go, a visibly flustered Knick team trailed by four after Mike Woodson was whistled for a tech. With Whoopi Goldberg in attendance, the Knicks, perhaps rehearsing the script for a reboot of the film "Eddie", fed Melo for a momentum-swinging trey followed by a bruising and-one over Andrei Kirilenko, and outscored Minnesota 12-5 to end the game.

X factor: Nikola Pekovic. The monstrous man in the middle from Montenegro submitted a mammoth line: 21 points, 17 rebounds and 7-8 from the charity stripe while repeatedly grinding reigning Defensive Player of the Year Tyson Chandler into a frustration-filled pile of hamburger, helping to pace the Love-less T-Wolves to a 47-35 advantage on the glass.

MVP: Gordon Hayward came off the bench and provided a big lift for the Jazz (17 points on 7-for-10 shooting). Hayward made a key block on Arron Afflalo's step-back jumper late in the game as Utah was clinging to a 92-90 lead.

Defining moment: After Paul Millsap made one of two free throws to put the Jazz up 95-93, on the ensuing possession, Gustavo Ayon was fouled after finding himself wide open under the basket. However, Ayon missed both free throws and Utah held on to win.

That was ... late-game drama: After being down by as many as 16 points early in the second quarter, the Jazz escaped with a 97-93 victory in a tightly contested game. Crunch time consisted of clutch baskets, missed free throws, and some ugly turnovers.

MVP: Setting a career high, Danny Green put up a ridiculous-as-it-sounds 25 points on just 10 shots, with a patently absurd True Shooting Percentage of 125 percent. He greased the skids on the Spurs' franchise record-breaking three-point night with 7-10 threes.

That was ... Dirk: Despite the Spurs' record-breaking night, the biggest story of the game was the return of Dallas superstar Dirk Nowitzki. Nowitzki put up eight points and six rebounds in 20 minutes, making 3-4 shots as the Dallas offense seemed genuinely surprised at his presence and neglectful of his existence. Don't expect that to continue going forward.

MVP: Blake Griffin did it all, and provided his usual handful of highlights to boot by torching the Suns for 23 points, 11 boards, four steals and three assists. The Clippers outscored the Suns by 33 with Griffin on the floor.

LVP: Goran Dragic played one of his worst games of the season with just seven points and one assist to three turnovers while getting torched at the other end by Chris Paul, who went for 17 and 13.

That was ... chippy: The Suns and Clippers combined for six technicals in a physical game that also saw Alvin Gentry kicked out for arguing a foul call.

-- Michael Schwartz, Valley of the Suns

MVP: Joe Johnson, as he's known to do periodically, played a game befitting his contract. He paced Brooklyn with 22 points -- including-gasp inducing 27-foot and 31-foot 3-pointers in the final 70 seconds of the third quarter -- and pulled down seven rebounds to boot.

X factor: Keith Bogans, widely and rightly regarded as a player whose value comes almost exclusively from the defensive side of the floor, brought it on both ends Sunday. The cagey vet scored a season-high 13 points on just six shots, nine of which came on a trio of timely 3-pointers.

Defining moment: Trailing 12-4 and up to that point shooting just 2-of-11 from the floor, the nets went to work at the 5:50 mark of the first quarter. Coming out of a timeout, Joe Johnson hit a 7-footer to jump-start what eventually became an 18-0 run. The Sixers, despite the best efforts of Jrue Holiday and Thaddeus Young, never reclaimed the lead.

MVP: Marcus Thornton. The Kings received good contributions from all of their players, but Thornton gave the steadiest and lengthiest impact. Playing a team-high 35 minutes, Thornton knocked down 3s, found open teammates and hustled all night on defense. His performance exemplified the energetic camaraderie of the Kings all night long.

X factor: Travis Outlaw. The current King gave his former team all kinds of fits. Keying the Kings' big second-quarter run, Outlaw was dynamite as he hit on mid-range jumpers and attacked the rim with ease. If Outlaw played the Blazers every night of the season, he'd be sixth man of the year material.

Carmelo Anthony, Knicks: With his team trailing in the fourth quarter, Melo saved his best for last, shaking loose for 19 of his game-high 33 points as the Knicks rallied for a 94-91 victory against the Timberwolves.

Dallas Mavericks: With Dirk Nowitzki returning to the lineup, everything was supposed to click for the Mavs, right? Wrong. The Dallas defense allowed San Antonio to knock down 20 3-pointers en route to handing the Mavs a 38-point road loss.

Nothing like win #13InaRow and knowing that I have 30 of my family members in LA from NC!!! I LOVE my family and ... m.tmi.me/DCVmn

"Kind of put us to sleep a little bit. I love Christmas music, but it was just the time of the game. We was down, we didn't have no energy, then they threw the 'Chestnuts are roasting.'" 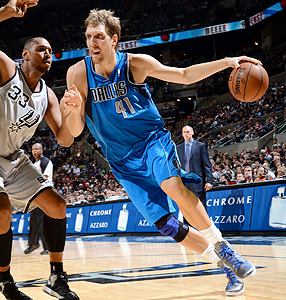 Jesse Johnson/USA TODAY Sports
After missing the Mavericks' first 27 games, Dirk Nowitzki made his season debut in a loss to the Spurs on Sunday night.

The Spurs routed the Mavericks, 129-91, posting the largest margin of victory in more than 20 years in a game played between two of the NBA's three teams from Texas. The last time an all-Texas matchup produced such a lopsided result was the opening night of the 1991-1992 NBA season, when San Antonio topped Dallas by 41 points (140-99). Don't worry, Rockets fans, your team gets a shout out for the largest ever victory margin in an NBA Texas shootout: a 116-68 drubbing of the first-year expansion Mavericks on February 4, 1981 at Compaq Center.