1. Durant vs. LeBron: The Rematch

MIAMI -- By both accounts, their intentions are genuine.

LeBron James simply wants to be pushed by the best in the summer just as much as he does during the NBA's rugged regular season and playoffs. Apparently, there's no better offseason sparring partner available than Kevin Durant.

And for Durant, no individual measuring stick in the league stacks up as tall as the all-around game belonging to James, a three-time league MVP who is just entering his prime.

Don't get this twisted.

This isn't some sort of apprenticeship. It's about mutual appreciation. For two years now, James and Durant have tried to explain the dynamic of their training sessions with one another, workouts they refer to as Hell Week.

James considers Durant his toughest defensive assignment in the league. But when it comes to defending his relationship with Durant, well, that comes quite easily. 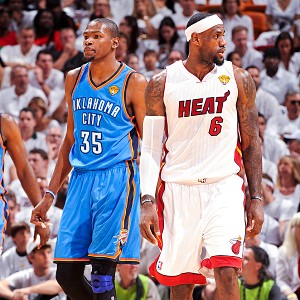 Andrew D. Bernstein/NBAE/Getty ImagesKD or LBJ: Who will shine brightest on Christmas?

Still, that doesn't stop the questions from coming, such as the one James faced as the Heat turned their attention to Tuesday's Christmas showdown against Durant and Oklahoma City in their first matchup since the Finals.

Why would two elite players who are rivals and just met for an NBA championship continue to work out together? I mean, it's not like you see Peyton Manning and Tom Brady tossing the ball around together in the offseason.

James attacked the question with the same versatility, elusiveness and sheer power he displays when he's driving down the lane against a backpedaling defender.

By then, James was on a roll. So he stayed on the attack.

"That's who I am," he continued. "I try to do things that's outside the box, and that's all it comes down to. We can't worry about what the other greats have done. We make our own mark. That's what it's all about."

A peculiar rivalry, it is.

But James and Durant will rekindle their love-loathe relationship Tuesday on the same AmericanAirlines Arena court where the Heat finished off the Thunder in Game 5 of the Finals on June 21. It's no wonder these two teams are so closely connected, even beyond the friendship their marquee players share. No other team in the NBA can sympathize with the Thunder's plight this season than the Heat.

This time a year ago, the Heat played from a familiar script when they entered American Airlines Center in Dallas to face a Mavericks team that beat Miami in the 2011 Finals.

Much like James did after tasting defeat in his first shot at a title with Miami, Durant entered the offseason determined to improve every aspect of his game, including a perceived reluctance to defend and to expand his low-post skill set.

And like James, Durant has responded to losing in the Finals by coming back with a season in which his averages in rebounds, assists, blocks and steals, his free throw shooting, his 3-point shooting and his overall field goal percentage are at career-high levels through the Thunder's 21-5 start.

The comparisons don't end there, either.

Thunder players have said any result other than a title this season would be a disappointment. It's a declaration that sounded much like the "championship-or-bust" mandate Heat guard Dwyane Wade issued entering last season.

After losing to Dallas, the Heat also tweaked their roster by adding Shane Battier just weeks before the 2011-12 season started. Oklahoma City made a bolder move when it dealt James Harden to Houston and acquired Kevin Martin, a veteran 20-point per game scorer who has bought into his role coming off the bench, and is having one of the most efficient seasons of his career.

Wade said he can sympathize with the motivated approach the Thunder carried into this season. Then, he pointed out that "sympathize" wasn't quite the fitting term.

"Sympathize?" Wade joked. "That's not the word I'd want to say. But I understand. I understand. Obviously, losing in the Finals, I understand what they go through. Especially when you play the team that beats you. So I understand the mindset. We all knew this was going to be the Christmas Day game anyway. They're playing well anyway. They want to come in and make a statement."

Wade said his Heat teammates didn't quench their thirst for redemption after losing in the Finals in 2011 until they actually felt the confetti fall on them the following June after winning four straight games against the Thunder.

That's why the Heat insist they won't be caught off guard by Oklahoma City's intensity. They're preparing as if it's Game 6 of the Finals instead of Game 25 of the season.

"When you get a chance to face the team that took that title away from you, kind of closed the door on that dream, even though it's not a championship game [Tuesday], you want some get-back," Heat forward Udonis Haslem said. "So I understand that, and we've got to be ready for that. You're up for it. You're excited. You're focused. You're intense. They're going to be energetic, and we've got to be as well."

Both teams will enter Tuesday's game rolling and well rested. The Thunder will have had four days off since their 12-game winning streak ended Thursday with a 99-93 loss at Minnesota. Miami has won four in a row by a combined total of 72 points, capped by a 105-89 victory at home Saturday against Utah.

Moments after beating the Jazz, Heat coach Erik Spoelstra walked into his office and saw the Thunder's scouting report waiting on his desk. Spoelstra insisted that it's normal procedure for his staff to already have the next opponent's folder waiting for him minutes after a game. But he acknowledged this one carried a bit more weight.

Both figuratively and literally.

"Certainly, with the human nature factor of the game, players will be looking forward to it," Spoelstra said. "They seem to be playing at an even higher level than they played at last year. They were very motivated during the summer. I'm sure they still remember the sights and scenes of the 21st of June. But they're playing at an amazing level, and we better be ready for their game."

And James expects it to be business as usual with Durant, with one bringing nothing short of the best out of the other. Their time together in the summer is already paying dividends for both this season. James and Durant are the only two players in the league averaging at least 20 points while shooting over 50 percent from the field and 40 percent from 3-point range.

Apparently, it's all about the company you keep.

During the offseason and in season.

"I told [Durant] before that if we're not training and if we're not working on our games to put ourselves in position to see each other in June, then we're doing a discredit to ourselves," James said. "Everyone wants us to hate each other, in a sense. But that doesn't take away from how we compete when we play each other. We compete at a high level. We don't like each other on the floor. But after the game, it's all good."

The plotline is the same: Four future Hall of Famers, all with something to prove, join together in pursuit of an NBA championship that will define their legacies. They are older than their rivals in Oklahoma City and Miami, and yes, slower. But it is their wisdom that will give them the edge.

Or so the story was supposed to go.

Instead ... well, everything that's happened thus far in the Lakers' season has been something of an "instead." But if we're keeping this movie metaphor up, the director (Mike Brown) has been fired, it took two weeks for the new guy (Mike D'Antoni) to take over the production, one of the leading men (Steve Nash) was unavailable to shoot any of his scenes for weeks, and the whole thing has gone wildly over budget.

Read the rest from Shelburne at ESPN Los Angeles »

WALTHAM, Mass. -- It has been about a month since Boston Celtics coach Doc Rivers suggested that his team was "soft" after being manhandled by the Brooklyn Nets in late November. The one time the Celtics pushed back that night, Rajon Rondo ended up with a two-game suspension.

The Celtics have played more inspired ball since then, hell-bent on erasing Rivers' doughy declaration, but their record is no better. The Celtics have lost six of their past 11 games and will trek to Brooklyn for a Christmas Day rematch (ESPN, noon) with a 13-13 record.

For Boston, this isn't just a chance to gauge how much it has toughened up, but it's the start of what the players believe is a crucial four-game road trip, one aimed at carving out -- or restoring -- the team's identity and ending the roller-coaster start to the 2012-13 season. And the Celtics are adamant about starting it on the right foot.

Read the rest from Forsberg at ESPN Boston »

Deron Williams isn't wrong when he says that the Brooklyn Nets run nothing as fluidly as the flex offense he guided as the Jazz's point guard. But Brooklyn's roster isn't endowed with the collective skill set those Utah teams had, and the absence of an orderly system doesn't explain why Williams has taken 241 shots outside the paint, for a terrible 40.7 effective field goal percentage.

Williams might argue that a good number of those attempts are hand grenades he finds himself with at the end of wayward possessions, but if he truly wants the Nets to improve upon their 11th-ranked offense, Williams will have to create his own flow. With some prompting from Williams, Gerald Wallace could make some devastating flex cuts, and Joe Johnson can space, post and pass better than any wing Williams ever had in Salt Lake.

Williams has real assets in Brooklyn, and a point guard with his talent shouldn't need an orthodox system to play systematic basketball. 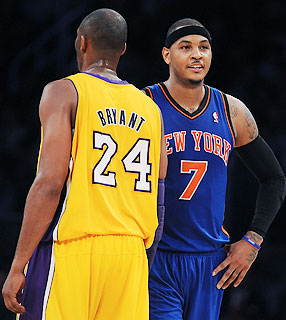 LOS ANGELES -- Blake Griffin hasn't been around the Los Angeles Clippers long enough to tell stories of how bad things once were for what was long one of the most maligned franchises in pro sports history.

He's only heard about the team practicing and training at the Spectrum, a health club in the South Bay where players would lift weights alongside fans. He vaguely remembers that the Clippers were 19-63 before drafting him first overall in 2009. And he wasn't aware that the Clippers had only two winning seasons since 1977 prior to last season.

Check out the rest at ESPN Los Angeles »

The Gift Of Scoring

Most Points on Christmas, Single Game

Most Rebounds on Christmas, Single Game

Most Assists on Christmas, Single Game

Bruce Bowen previews all of the Christmas day action on ESPN and ABC and predicts the winners for each game.