They breezed to their 15th consecutive victory with a 106-77 pasting of the Boston Celtics on Thursday night, with only a late jumper by Courtney Lee to prevent them from winning by 30-plus.

The Clippers' average margin of victory this season is 10 points. No opponent has been within one basket of them in the final minute since the Chicago Bulls on Dec. 11.

You know what they could use? Some grind-out-game reps. A little practice at what it feels like when you need a basket or a defensive stop in order to win, when you and everyone else in the building knows it. 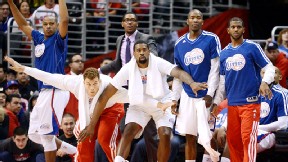 "We're not going to say, 'Let's let 'em come back so we can work on late-game situations,'" Chris Paul said. "You've got to play the hand that you're dealt."

Celtics coach Doc Rivers said he was legitimately worried about his championship team of 2007-08, when they were winning regular-season games by an average score of 100-90.

"I was concerned going into the playoffs that year, because it was too good of a year, as far as I was concerned," Rivers said. "We hadn't had any bumps, nothing. And I was really concerned.

"I really believe what helped us was we had a seven-game series in the first round [against the Atlanta Hawks]. I thought that's why we won it. Because we had a test flight and we passed it.

"That whole year was literally too easy. Sometimes you don't need that. You don't want that."

Chris Paul, Blake Griffin, DeAndre Jordan, Caron Butler and Eric Bledsoe did go through a tough seven-game series of their own together against the Memphis Grizzlies in the first round last season.

Lately, the Clippers' closest competition has come from other Clippers. Eric Bledsoe ripped a rebound from Lamar Odom. Odom just smiled, since he was in the midst of a 13-rebound night. Later, Ronny Turiaf snatched a board away from Ryan Hollins, then gave Hollins some dap on the downcourt run.

It's all good in Clipper Country right now. No beef, no division. Lots of clowning though. When Chris Paul's son triumphantly declared he had spent some of the game hanging with Justin Bieber in a courtside seat, dad told him to pipe down so people wouldn't think he was too privileged. Griffin did his postgame interview while wearing a fake mustache the Clippers passed out to promote Chris Paul's lost twin brother, "Cliff," in an insurance ad.

Will it all hold up when it's time to get serious?

We still haven't seen how this bench -- the unit that has separated the Clippers from the rest of the league so far -- will react in the playoffs. Depth superiority is minimized in the postseason, when the games are less frequent and the timeouts last longer, allowing starters to play longer minutes. Matt Barnes won't continue to knock down 3-pointers at the 40 percent rate he has been hitting in December.

That's why Chris Paul said, "It's going to be a long time before we really see what our team is made of."

He's think in terms of an old-school photographer, not someone who snaps digital pictures on a cell phone. Still, a good photographer could tell when he had a good shot even before the image was developed in a tray of chemicals. That's what the Clippers have in their hands.

Opposing coaches keep raving, with Doc Rivers offering the greatest tribute to date: "After that we're going to hide some money in the ceiling."

That was a reference to his motivational ploy in the 2009-10 season, when he stashed some dollars in the ceiling of the visitors' locker room during the regular season and told his team they'd return to reclaim it in the NBA Finals … which they did. The implication was that the Clippers would be the Western Conference representative in June (we won't get into how unlikely it is that the Celtics would be there to face them).

The Clippers are among the league's top five teams in both offense and defense. They're clicking so well right now that at times coach Vinny Del Negro has to manufacture complaints, such as his displeasure that the Clippers let a bit of their big lead slip away in the previous game against Denver.

He had to be prompted to find flaws in this 106-77 victory against the Celtics, so he did bring up their 50 percent shooting from the free throw line. That's a legitimate concern, as is the fact Griffin, Jordan, Bledsoe and even Paul haven't experienced what the third round of the playoffs feels like.

But for every flaw the Clippers have, it's easy to point out areas in which they can get even better. For example, they handled the Celtics easily even though Paul shot 3-for-11. The deepest team in the league will become even deeper when Chauncey Billups and Grant Hill return. This team has plenty of reasons to be excited about the postseason.

Yet somehow they haven't overlooked the daily duties of the NBA, the seemingly unending number of games. As of late, every time they play, they come out on top.

"We want to be winning in April and May," Griffin said. "It's one of those things where we don't want to get too high and then have a lull. It really starts with every game we come out and we talk about our defensive intensity, and what has made us successful and that's our defense."

And the bench and the star power and the carefree attitude.

Most valuable player: Serge Ibaka. Kevin Durant poured in 40 points, but Ibaka had 19 of his own on just 10 shots to go along with 17 rebounds (8 offensive), 5 blocks and some huge defensive possessions down the stretch. The Thunder don't win this game without his energy on both ends.

That was … something that words can't do justice: In one miraculous third-quarter sequence, Kevin Durant pinned a Darren Collison layup against the backboard, picked up the rebound, took it coast to coast, jumped from just inside the free throw line and dunked it all up in Chris Kaman's grill.

X factor: The Thunder going small in overtime. OKC coach Scott Brooks has been reluctant to go long stretches playing Durant at power forward with just one big man on the floor, but he did it in the overtime period and it paid off.

MVP: Matt Barnes. The reserve small forward was the beneficiary of countless open looks and took advantage of them, hitting a season-high five 3-pointers. Barnes finished with an incredibly efficient 21 points in just 23 minutes of action.

X factor: Turnovers. The Celtics got sloppy with the ball (18 turnovers) and the Clippers made them pay, scoring 26 points off the miscues as they punished Boston repeatedly with their athleticism in transition.

That was … easy: The Clippers cruised to their 15th straight win, opening up a double-digit lead in the opening minutes and never looked back. The Celtics had no answer for the Clippers' precise (8 turnovers) and unselfish (31 assists) scoring attack.

Kevin Durant, Thunder: Goes for 40 points, 8 rebounds and 5 assists, but it was his block followed up by a coast-to-coast jam that left the big mark in Oklahoma City's 111-105 overtime win over visiting Dallas.

O.J. Mayo, Mavericks: Probably shoulda stayed in bed. Under the weather and in a slump of late that has coincided with the Mavs' four straight losses, Mayo had more turnovers (six) than points (four) in the loss to OKC.

The expectations were way to high for this team. We didn't even have a losing record.... Didn't even give my dad a full season. #OUTRAGE!

"It's not my fault. But as soon as I heard the news, I knew what was coming. I knew folks would blame me, would assume that it's history repeating itself because of what was said about Coach [Jerry] Sloan and me after he resigned."

-- Nets guard Deron Williams, on becoming a focus for the firing of Avery Johnson.

8. Pulling Out The Win 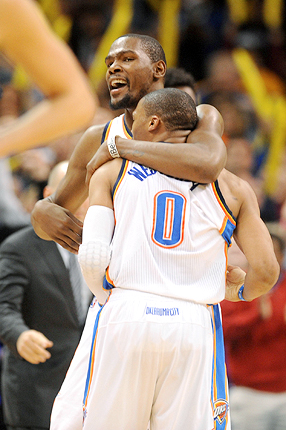 Kevin Durant, Serge Ibaka and Russell Westbrook dominated their areas of expertise in the box score of the Oklahoma City Thunder's 111-105 overtime victory over the Dallas Mavericks. Durant had 40 points, Ibaka collected 17 rebounds and Westbrook contributed 10 assists; no teammate had more than half as many points, rebounds or assists, respectively.

It marked only the second game in NBA history -- and the first resulting in a victory -- in which three different players reached those statistical levels -- that is, one scored 40-or-more points, a second had 17-or-more rebounds, and a third had 10-or-more assists -- while no teammate contributed more than half as many points, rebounds or assists. On Dec. 4, 2004, the New York Knicks, then coached by Lenny Wilkens, dropped a 107-101 decision to the Charlotte Bobcats (then a first-year expansion team); Jamal Crawford scored 41 points, Nazr Mohammed had 17 rebounds and Stephon Marbury had 11 assists, but no other Knicks player had half as many in any of those categories.