1. Numbers Working Against Lakers After Loss

LOS ANGELES -- Dwight Howard had ice wrapped around his right shoulder, commonplace for a baseball pitcher who'd just thrown seven innings but a rare sight in an NBA locker room. Pau Gasol's nose was swollen to Humpty Hump size, with a cut across the bridge and gauze sticking out of his right nostril. Neither of those sights should jar and alarm the denizens of Lakerland as much the Staples Center scoreboard that read Denver 112, Lakers 105, and the Western Conference standings that show the Lakers in 11th place, with a 15-18 record.

The facts are more important than the theories about what's wrong, and at this point everyone from the front office to the disgruntled fans has a theory. The Lakers are one of only six NBA teams that allow their opponents to score more than 100 points a game. If the top eight teams in the Western Conference maintain their current pace, the Lakers must go 31-18 in their remaining 49 games to get the 46 victories it would likely take to make the playoffs. 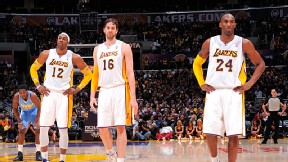 As basic as their task is -- play better defense, win more games -- they still haven't reached a consensus decision on how to do so. There are schisms of philosophy and application. They're in a hole and can't figure the way out.

In a continuance of their differing ruminations on chemistry following Saturday's practice, after Sunday's game Bryant welcomed a little dissension in the ranks, while Howard issued a plea for unity.

"I think it's fine for us to boil over a little bit," Bryant said. "It's fine to get a little chippy. I kind of get the sense in this locker room that that's finally starting to happen."

Bryant thrives on competition. He believes that's what brings out the best of players, even if they're competing for supremacy of the same team. Howard takes a different approach.

"Sometimes when you try too hard, you mess up," Howard said, putting together a nine-word sequence I could never imagine Bryant uttering. "We're just trying to put it all together, just quiet our spirits and play. Everything is so muffled, and we're not 'one' right now. We have to get to that place where we're one as a team and we move forward together. That's the only thing I can say about being patient."

Howard is right, the Lakers would be better off if their superstars were aligned and thought the same way. But that's not going to happen, just as the Lakers fans' dream scenario of Mike D'Antoni getting fired and Phil Jackson coming to the rescue isn't going to happen.

It's still going to be D'Antoni's system, with its lack of defensive emphasis or post-up opportunities for Howard and Gasol. It's worth noting that Bryant isn't publicly questioning the coach. He blamed the Lakers' defensive woes on execution, not strategy, which translates to players, not coaches.

That said, there's nothing to indicate the solutions will come from the coach's clipboard. D'Antoni began the evening saying the Lakers' defensive problems are connected to their struggles adapting to their rules in the offense. Then the defensive struggles persisted throughout a first quarter in which the offense was more inclusive then ever, with eight players scoring, Kobe Bryant dishing out four assists and even the forgotten Gasol and Antawn Jamison getting to sit at the table. The Lakers shot 58 percent in the opening 12 minutes, and yet they still trailed, 34-26. They were in for another long night of playing from behind, as was the case in their Friday loss to the Clippers.

Afterward, D'Antoni said, "we're having to dig out every game, and somehow we have to try to figure out why that's happening, and if we can solve it, then we need to do it."

The Nuggets played the game the way they wanted to, getting to the basket. They dominated the points-in-the-paint stat, 60-38. And even on a night the Lakers moved the ball more than normal, the Nuggets still had more assists, 33-30.

"That's who we are," Nuggets coach George Karl said. "We're not going to beat anyone by paying one-on-one, we're going to beat people by playing basketball."

That usually works fine in the regular season, but not in the playoffs. The irony is the Laker team is set up better for the postseason, but it's the Nuggets who have a better chance to get there.

Most valuable player: For a change of pace, I'll say Ray Allen was the MVP of the game (sorry, LeBron). Ray Allen helped seal the game by scoring 13 points in the fourth quarter, nine of them during Miami's 21-0 run.

Defining moment: After Washington finished a 7-0 run in the fourth quarter, Heat coach Erik Spoelstra called a timeout. After that, Miami went on a 21-0 run, leaving the Wizards in the dust to end the game.

That was … worse than expected: Somehow Washington manages to lose in many different ways. A gut-punch 2OT loss to Brooklyn on Friday seemed to be the new low. Yet Sunday night they managed to go scoreless in the last seven minutes. It can get lower.

MVP: Zach Randolph once again tortured the Suns on the interior by scoring 21 points on 9-for-11 shooting to go with eight boards. He put up a 38-22 game against Phoenix in December.

Least valuable player: The Suns rely so much on Goran Dragic to score and create, and he failed to do that Sunday night with just two points on 1-for-6 shooting to go with four turnovers before pouring in seven in garbage time.

Defining moment: The Grizzlies turned the ball over on five consecutive possessions early in the fourth quarter, but thanks to their stifling defense they did not surrender any of their six-point lead.

-- Michael Schwartz, Valley of the Suns

MVP: The efficiency wasn't there, but Kemba Walker was the MVP for the Bobcats. Walker scored 20 points on just 9-of-23 shooting, but hit some key buckets late in the fourth quarter and in overtime. The Bobcats' point guard also had seven assists and two steals on the night.

X factor: The Pistons really should've won this game. Detroit led for most of the game, but gave up 19 offensive rebounds leading to 25 second-chance points for the Bobcats. The Pistons just aren't a good enough team to be giving that many second opportunities and they paid for it.

That was … not something you see very often: During the five minutes to start the second half, the Pistons committed four offensive fouls, the majority of them coming in transition or on the secondary break. Two were committed by Kyle Singler, the other two coming from Jason Maxiell and Brandon Knight. It was one of the strangest stretches of offensive basketball I've seen in some years.

Defining moment: Kobe made a startling 3-pointer with 36 seconds left to pull the Lakers within three. Next, Howard's monster block of Andre Miller sailed right to an open Danilo Gallinari, who sank a dagger 3.

The Nuggets' bench: Andre Miller, JaVale McGee and Corey Brewer combined for 43 points in the win over the Lakers, all over plus-10 in the plus-minus category. Miller, the 36-year-old ironman, managed 10 assists in 24 minutes.

Wizards' starters: This august quintent managed only 29 points in the 99-71 loss to the Heat. Garrett Temple led the way with zero points on seven shots in 32 minutes on the floor.

3 techs in 3 games, not like me...@kendrickperkins is a bad influence on my life lol jk..I will be better, sorry guys

"I always liked to think you don't want to build your franchise on hope."

-- Mavs forward Dirk Nowitzki, on the team's stategy that it hopes to entice free agents to return to title contention. 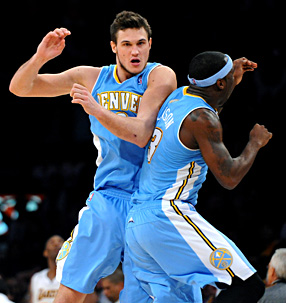 Jayne Kamin-Oncea/USA TODAY Sports
Denver Nuggets small forward Danilo Gallinari reacts with point guard Ty Lawson (3) after he hit a 3-point shot with 13 seconds left on the clock in the game against the Los Angeles Lakers.

The Miami Heat defeated the Washington Wizards, 99-71, on Sunday, in the 100th regular-season game between those teams, three weeks after posting a 30-point victory over Washington in their previous meeting. Prior to that, Miami had only two wins by 25 or more points over the Wizards, both in early 1994, in their entire history. These recent blowouts might seem like the natural order of things, but in fact the Wizards had won three in a row over the Heat prior to their two recent losses.

Most valuable player: Kevin Durant. Can we call him a point-forward yet? Durant's ability to lead the break and selflessly move the ball to the open man netted him seven assists and provided a perfect offensive balance.

Least valuable player: DeMar DeRozan. He's a post-up guard, but DeRozan tried to leverage a non-existent advantage all night. His 4-for-16 outing was marred with difficult turnaround jumpers that often didn't come close to falling.

That was … forward driven: Serge Ibaka and Nick Collison took only what was given to them, and that was usually wide-open shots. With Durant and Russell Westbrook both creating, scoring against the Raptors' thin frontcourt was easy sledding.