NEW YORK -- The explanation was blunt and a tad crude, but when Brooklyn Nets owner Mikhail Prokhorov had to come down out of the Canadian Rockies last month to fire Avery Johnson, it was with a clear mandate.

"We have a basket of talent," Prokhorov said just more than three weeks ago. "And they are capable of much more."

Finding the root of the Nets' midseason turnaround is as uncomplicated as Prokhorov's assessment suggested. They are now 11-2 since Prokhorov dropped the ax and promoted P.J. Carlesimo after their solid 88-85 victory over the New York Knicks Monday at Madison Square Garden.

Seven games back of the Knicks when they made the coaching change, the Nets are now a game back in the Atlantic Division and again have sights set on a top playoff seed as they reach midseason at 25-16. 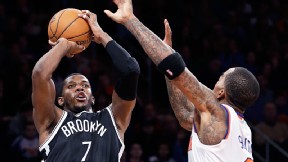 Recently, an NBA team did a study of midseason coaching changes over the last decade. The results showed there was only a 1 percent difference in win percentage, in the negative, on average when an interim coach takes over. Mike Woodson going 18-6 after Mike D'Antoni was fired last season was such an outlier from the norm that it earned him the job long-term.

The basic reason for the historic interim malaise is simple: No matter who has the clipboard, the players are the same.

In the Nets' case, though, while the players haven't changed, their individual performances certainly have. Carlesimo has made minor adjustments to the rotation, encouraged a bit more freedom on offense and lightened the mood with the occasional joke.

But the reason the Nets are suddenly potent is because their players, especially their high-paid stars, have started to act like it.

"A game plan is meaningless if the guys don't execute it," the frank and experienced Carlesimo said after his latest win.

Joe Johnson is shooting nearly 10 percent better on 3-pointers and averaging two more points per game since the change. His hanging jumper over J.R. Smith with 22 seconds left, the last of Johnson's 25 points, ultimately made the difference on Monday.

Brook Lopez is healed from a foot injury that derailed the Nets in December and probably sealed Avery Johnson's fate. He has five double-doubles since Carlesimo took over. If you know Lopez's rebounding history, that's no small feat. Against the Knicks, his aggression in rebounding scrums with Tyson Chandler was downright admirable as he ended up with 11 boards and 14 points.

As the league's highest-scoring center, his last month of play has probably assured Lopez of his first All-Star appearance.

But nothing has spurred on the Nets more than Deron Williams. Totally down on his own play around Christmas -- he said he was "playing like crap" -- after signing a $100 million deal last summer, Williams has gotten it going. He's not exactly playing like a superstar, but he has broken out of a miserable shooting slump (his 3-point shooting has leapt 7 percent) and he's averaging almost two more assists per game since Carlesimo has taken over.

"I feel like I was a big part of why we were losing," said Williams, who had 14 points and 12 assists in the latest win. "Our focus, energy and enthusiasm have been a lot better … [Carlesimo] is different than a lot of coaches I have played for, his style and sense of humor."

The Nets aren't running any different plays since Carlesimo was installed. He's calling a wider variety of them and has attempted to get the team to play with more pace, which has led to more scoring. As a result, the Nets are averaging about eight more points per game under Carlesimo than they did under Johnson. That's a significant increase following an on-the-fly changeover.

As one league scout said about the Nets: "They're not playing different, really, but they're playing harder."

It also sure does help when more of the shots go in the basket, no matter who is drawing them up.

"Whenever you have a guy that means that much to you, your franchise player, when Deron picked it up, we picked it up," Nets veteran Jerry Stackhouse said. "I don't think there's any coincidence. Yeah, the coaching change, you can spin that all you want to, but the guys on the court are the ones who really matter."

Most valuable player: Kirk Hinrich. The porous Lakers defense has created yet another monster in the opposing backcourt. Hinrich could not miss, getting 22 points on 9-for-11 shooting, along with seven rebounds and eight assists.

X factor: Round of applause for Jimmy Butler, who defended Kobe Bryant well all game. Butler had several energizing dunks and made smart and decisive passes. He's no Luol Deng, but was stellar filling in.

That was ... necessary?: Mike D'Antoni's decision to make Pau Gasol a sixth man was controversial, but the early results are somewhat promising despite the loss. Gasol finished with 15 points, 12 rebounds and two blocks in 23 minutes.

MVP: Nene scored 19 of his 24 points in the first half, but did a little of everything in the second, making hustle plays and crashing the boards to keep the Wizards in it even when Portland got hot.

That was ... a first: Despite the loss, Nicolas Batum recorded his first career triple-double, finishing with 12 points, 10 rebounds and a career-high 11 assists.

MVP: Tim Duncan. Looking spry after sitting out the second game of a back-to-back over the weekend, the future Hall of Famer was dominant in Philadelphia. Duncan scored 24 points on 17 shots -- including the go-ahead bucket with 1:43 left -- and pulled down 17 rebounds, and, working in concert with Tony Parker, added five dimes.

Defining moment: Here's the sort of thing a bad basketball team does: uses a 23-4 run to flip a once-mighty deficit into an 82-75 advantage with 5:39 left, then proceeds to squander its remaining possessions on lazy/momentum-eroding midrange shots and get outscored 15-3 the rest of the way. The Sixers are, as of this writing, a bad basketball team.

That was ... a subpar Holiday: Nursing an All-Star candidacy, the logic of which sharpens each time a "Guess who's the only player averaging 19 points and nine assists this season?" graphic flashes across the screen, Jrue Holiday had every reason to play well. He didn't. Jrue managed 15 points on 20 shots, turned the ball over six times, and was outplayed by Tony Parker.

MVP: Stephen Curry. His 28 points and six assists led the Warriors out of their fourth-quarter rut, and the Clippers had absolutely no answer for his off-the-ball movement. Six of eight from downtown is ridiculous.

X factor: Threes and free throws. As has been the case all season between these two teams, those two factors determined the outcome. Golden State was the more efficient offense, if only slightly.

That was ... a shootout: Both teams made double-digit 3-pointers and were shooting well more than 50 percent for most of the game. The fast-paced tempo dared each team to one-up the other with a barrage of treys.

MVP: Joe Johnson. He was only 8-for-20, but JJ's triples (5-for-8 on the day) served as the microcosm for a Brooklyn team that was sizzling for much of the afternoon. Couple that with a few jumpers late in the fourth, and you get a signature season performance.

X factor: 3-point shooting. The Nets gave the Knicks a bit of their own medicine, connecting on 12 of 24 from deep and coming up with answers -- on the hot hands of Johnson and Keith Bogans -- to every big 'Bockers bucket down the stretch.

That was ... par for the course: A series split in which each team wins one on the other's home turf and every game teeters on the brink of brawls? Both boroughs will take it. Bring on a playoff series.

That was ... exciting: The Grizzlies' penultimate possession went for 47 seconds as a staunch Indiana defense prevented Memphis from scoring until its third shot. Then George Hill drew a foul on the other end and made a go-ahead free throw that left just 1.4 seconds for a game-winning try by the Grizzlies. Rudy Gay made the shot -- it just took too long.

MVP: Paul George. His shooting was ugly (5-for-13), but George filled the stat sheet, created open 3-pointers for his teammates, forced turnovers and blanketed Memphis players on defense for 42 minutes.

X factor: Wayne Ellington. He hit back-to-back 3-pointers seconds after entering the game for the first time, and scored four quick points late in the third that put Memphis up by six. The Grizzlies would have lost by more than one if not for his game-high 17 points off the bench.

X factor: Location issues. With word of the team's pending sale to a Seattle-based group making headlines, and facing a 10 a.m. tip-off on West Coast time, the Kings were sluggish throughout the first half. By the time they woke up midway through the third quarter, they faced a deficit too big to overcome.

That was ... a glimpse of the Hornets' potential: At full strength and firing on all cylinders in the first half, New Orleans dominated Sacramento on both ends of the floor. Anthony Davis missed the second half after spraining his ankle, and suddenly the game was competitive.

Stephen Curry, Warriors: Curry sank four 3-pointers in the fourth quarter and Golden State rallied from seven points down in the final 11 minutes to beat the Clippers, 106-99. Curry had 28 points, sinking six of eight from 3-point range.

Lakers late no-show: Kirk Hinrich and Marco Belinelli are solid players, but usually not the type of elite players one expects to beat Dwight Howard & Co. down the stretch. D12's single-single performance (eight points, nine boards) and Kobe Bryant's 15 misses did not help the cause in an 95-83 loss.

-- Lakers forward Pau Gasol, on coach Mike D'Antoni's decision to bring him off the bench. 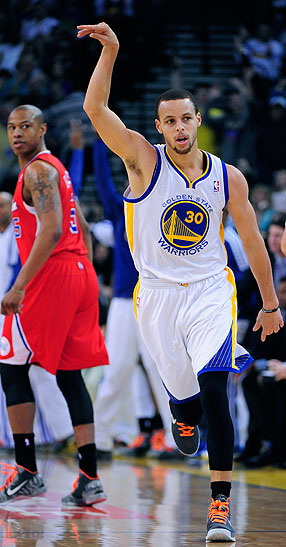 Tim Duncan had 24 points, 17 rebounds and five assists at Philadelphia on Monday evening. It was the first time in more than five years that Duncan reached all three of those statistical levels in a win. He last did so on Dec. 30, 2007, with a 24-17-7 performance that helped the Spurs defeat the Grizzlies.

MVP: Al Horford, who finished with 28 points and 10 boards. Horford took 20 shots, far more than he's accustomed to, but he connected on 12 of them.

X factor: Pargosanity, anyone? Jannero Pargo, who was recently signed to back up Jeff Teague after Devin Harris and Lou Williams landed on the injury list, made the most of his opportunity by scoring 16 points, with 14 coming in the fourth quarter.

That was ... injury free! Well, sort of. Neither of these two injury-riddled teams suffered another blow, but SkyHawk, the Hawks' mascot, hurt his ankle when he landed wrong attempting a timeout trampoline dunk.

MVP: Kemba Walker's team lost, but it's hard to argue him not being the best player on the court for a majority of this game. He scored a career-high 35 points on 12-for-21 shooting (6-for-7 from behind the arc) and got wherever he wanted, whenever he wanted for 39 minutes.

X factor: Patrick Beverley gave Houston 24 huge minutes and finished the game in place of Jeremy Lin. Beverley had a slew of hustle plays that allowed the Rockets to mount their comeback, and scored 10 points on 50 percent shooting.