1. Nuggets Rule The Break Against Lakers

It all begins with a defensive stop. The rebound is secured, but it's not long before the ball makes its way to the frontcourt, with a wing -- maybe Corey Brewer or Wilson Chandler -- already leaked out in position. The backcourt player takes a dribble, stalling just long enough for the player upcourt to receive a lead pass in perfect stride. The lone defender doesn't stand a chance. It ends in two points, often in spectacular fashion.

The Denver Nuggets' transition game was worthy of a number of superlatives, but perhaps the most apt descriptor would be "rote." Fast breaks in the first half occurred like clockwork, turning even the most spectacular displays of athleticism into a mundane routine. The disparity in fast-break points -- Denver's 33 to the Los Angeles Lakers' 3 -- was a game-defining stat, but the magic number that all but sealed the Nuggets' 119-108 victory over the Lakers was 78. 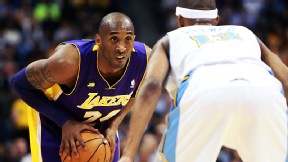 Chris Humphreys/USA TODAY SportsKobe Bryant was hot, but the Nuggets' dominance on the break and in the paint impressed most.

The Nuggets had 78 points in the paint, tying a season high previously reached against the Charlotte Bobcats on Dec. 22. Denver had imposed its style of play for much of the game, and the Lakers seemed content to exacerbate the problem by throwing the ball away on a multitude of bad passes.

The Lakers' 15 turnovers turned into 22 points on the other end. Chandler, starting for Danilo Gallinari who was out with a bruised left thigh, was the main beneficiary of the Lakers' poor rotations and lack of discipline keeping up with Denver's wings. Chandler finished with 23 points on 10-for-18 shooting, his second-highest scoring output this season.

It was a team effort from the Nuggets, which shouldn't come as a surprise. When they're at their best (which usually, if not only, occurs at home) the team transforms the game into a track and field exhibition, taking full advantage their roster's depth and explosiveness. By the end of the first half, the Nuggets had 16 assists and nine players on pace for double figures.

It's a stark difference from the Lakers, who have relied on Kobe Bryant's soloistic brilliance more and more recently with the team's constant health issues. Coming off Sunday's perfect 14-point fourth quarter performance against the Dallas Mavericks, Bryant started off cold. In fact, Kobe's first shot of the game was an airball. He shot 1-of-7 in the first quarter before eventually catching fire.

But after averaging 39 points on 63.6 percent shooting in the past two Lakers victories, Kobe's 29 points on 52.2 percent shooting looked pedestrian. However, with the Lakers facing an increasingly precarious future, Kobe's numbers don't matter as much as making adjustments and putting in a consistent effort on the defensive end. It's a little late in the season to be having identity issues on either end of the floor, yet here the Lakers are.

While the game put a damper on the Lakers' winning ways as of late, it might be what points the Nuggets in the right direction. After losing four of their past six games, getting a win that affirms the team's fast and furious style of play could be the spearhead of a final push. It's no secret that the Nuggets would love to nab the fourth seed in the West. The Nuggets are sterling 24-3 at home, but a paltry 12-19 on the road, which makes home-court advantage a legitimate game-changer come playoff time.

The questions that remain for Denver don't involve identity. The team may not have a true figurehead on the court, but they will go as far and as fast as Ty Lawson (22 points and 8 assists) and Iguodala (14 points, 12 assists) take them.

After an early-season malaise, Lawson has reemerged at the midseason point, becoming exactly what the Nuggets needed to run their balanced counterattack on the league. It's only one game, against a team that may or may not make the playoffs, but the Nuggets came away with a hallmark victory, an emblem for what the team is capable of.

Their game is fast, insistent, faceless. It's a machine that converts an opponent's mistakes into efficient production. And it runs and runs, like clockwork.

Most valuable player: Paul Pierce, Boston's captain, scored 20 of his 26 points in the second half, including seven in the overtime period, to help Boston salvage a big win to close out their five-game road trip.

X factor: With the Celtics playing their fifth game in seven nights, they needed an offensive spark to keep pace with the uptempo Jazz. Avery Bradley delivered that extra boost with a season-high 18 points to go with his usual defensive toughness.

That was … smart: With the Celtics leading by three in the closing seconds of overtime, Boston was able to get the Jazz to run crucial seconds off the clock. Then, instead of allowing a 3-point attempt, Kevin Garnett wisely fouled Paul Millsap on the floor with four seconds remaining. The heads-up play ruined Utah's best chance to tie the game and was perfect execution of the fouling-while-up-three strategy.

MVP: In the absence of Danilo Gallinari, Wilson Chandler helped the Nuggets run the Lakers ragged by scoring 23 points in 25 minutes just by filling the lanes and running the floor. Against the Lakers' shoddy transition defense, it was that easy.

X factor: Easy buckets. The Nuggets ran off everything -- turnovers, misses, makes -- it didn't matter. As a result, the Nuggets quickly piled up 33 fast-break points and a whopping 78 points in the paint.

That was … familiar. The Lakers got down early because of laziness and bad communication on defensive. Kobe Bryant (29 points) brought them back, but it was too little, too late. Seems to be a recurring theme, doesn't it?

MVP: Al Horford dominated the Pistons' frontline, scoring 23 points and grabbing a career-high 22 rebounds over 39 minutes in the win.

X factor: After having six turnovers in the first quarter, the Hawks controlled the ball and gave it away only two more times through three quarters, while forcing 13 Detroit turnovers.

That was … predictable: Playing without Andre Drummond, Will Bynum and Brandon Knight, Detroit fell apart, allowing 34 points in the second quarter and trailing by double digits for the rest of the evening.

MVP: On a night when both teams struggled offensively, Bradley Beal stood out from the pack (20 points on 8-for-13 shooting). Watching him nail jumpers with that silky-smooth shot of his was a sight to behold.

Least valuable player: Rudy Gay was awful. His shot selection and decision-making were questionable all night long, as exemplified by his stat-line -- 7 points (1-for-11 shooting) and 5 turnovers. It's games like these that show why Gay just isn't worth his steep pricetag.

X factor: There's no question that the Wizards won this game because of their defense (holding the Raptors to 36.7 percent shooting). And that should come as no surprise, given that Washington entered the game ranked seventh in defensive efficiency.

Horford
Al Horford, Hawks:
Horford had 23 points and 22 rebounds, leading the Hawks to a 114-103 victory over the Pistons. With all the Smoove trade talk behind them, the Hawks now hold home-court advantage for the first round.

Gay
Rudy Gay, Raptors: Gay shot 1-for-11 and finished with seven points, one more than his season low, set Dec 22 at Houston when he played for Memphis. It was his 10th straight game not shooting 50 percent or better from the floor.

Local reporter asked Kobe if he ever expects to find kindness in Denver: "Not after we've dominated them in the postseason, year after year."

"He told me when they beat us last year in the playoffs that he was getting old. He was lying, man. He looks healthier and younger now than he did last year. And the shots he's making are just a coach's nightmare."

Russ Isabella/USA TODAY SportsCetlics guard Avery Bradley dropped in a season-high 18 points on 8 of 12 shooting, helping the Celtics an overtime win in Utah.

Al Jefferson grabbed a game-high 11 rebounds in the Utah Jazz' 110-107 overtime loss to the Boston Celtics. Jefferson, who played three seasons with Boston, has recorded 4,063 rebounds since being traded as part of the package that brought Kevin Garnett to Beantown. That is now the highest rebound total that any NBA player has accumulated after leaving Celtics. The previous high was 4,059 by Mel Counts.