1. Ben McLemore Must Be More Than All Right

LAS VEGAS -- After going 6-of-23 in his first Summer League game, life was supposed to get easier for rookie Ben McLemore. Instead, he found himself in yet another crucible against the Golden State Warriors, a team well-prepared for Sacramento's GSW-patterned offense.

From the outset of the game, Golden State players yelled out and blew up Kings plays, forcing Sacramento into 19 turnovers and an 80-66 loss. New Kings head coach Mike Malone just came over from Golden State, and it seems he's remaking the Kings in that image. That strategy could well pay off, just not yet, and not against a squad familiar with the Golden State blueprint.

Ben McLemore was caught in the chaos, shooting 4-of-12 for 14 points with four turnovers. Summer League is supposed to offer star rookies some space against lesser competition. Unfortunately for McLemore, Kent Bazemore boasts elite NBA defensive potential in this minor league setting. Bazemore blanketed Ben, frequently shading McLemore to the left. The Warriors screamed "Down him!" indicating that they were willing to part whole sea for McLemore, so long as he had to move toward his offhand. 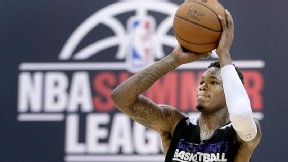 When asked if the strategy was to push McLemore leftward, Draymond Green mulled the politics of answering for a moment before responding: "Yes. Yes. He's a better shooter coming right, and he's also a better catch-and-go guy coming out right. So we definitely wanted to send him out left, continue to push him to his left."

Though blessed with incredible potential, the talented rookie couldn't make Golden State pay. On one particular possession, he actually drove left, then switched to his right hand and missed his shot through a thicket of limbs. A left-handed layup was there for the taking, but the first-year player just couldn't pull the trigger.

Ben McLemore felt the strategy was more general than specific, explaining, "I don't feel like they were [sending me left]. I just think they were trying to stop me from shooting."

The smiling rookie preached positivity and perseverance: "I think it's coming along. I just gotta keep shooting the ball," adding, "eventually my shot's going to fall."

There is reason to believe that McLemore's optimism is well-founded. Though he suffered a rough night, he twice made the crowd murmur in awe. On one particular play, he snagged his own miss and leapt himself into a blur that suddenly appeared on the other side of the hoop for a layup.

On another, McLemore floated upward and double-clutched for a difficult fadeaway make. McLemore possesses the rare quality of explosive athleticism that expresses itself calmly. If Derrick Rose is all violent torque, Ben McLemore is stealthful grace. That is, when he's allowed to drive right.

This flaw might doom a rookie with the old Sacramento Kings, but these Kings have a new owner and prerogative. Perhaps McLemore is the perfect test case for whether it's really a new day in Sacramento.

Tyreke Evans, a similarly hyped former Sacramento shooting guard, never quite developed a facility with both hands, and teams scouted him into some trouble. He's one of a long slew of Kings prospects who didn't progress as anticipated. Under the Maloofs, talent tended to languish and rust. With Vivek, it's possible that talent will instead be nurtured to its full potential.

Even while struggling, McLemore seems to fit the "full potential" description. By all accounts, the rookie is willing to work, willing to build his game. He was the last guy to leave Sunday's Kings practice, getting copious shots up and scowling at every miss. If McLemore becomes another Sacramento disappointment, the blame likely won't lie with him.

Mike Malone has a plan set for his rookie, though: "We're going to work on his handle so he gets to a point where he's very comfortable at being effective at breaking his man down, getting into the paint and making plays."

Once McLemore gets to that paint, literally or proverbially, he's bound to make some incredible plays. And if he gets there, it bodes well for Sacramento's future beyond just having a good, young player. It could mean that they've turned a corner on developing youth.

Ethan Sherwood Strauss writes about the NBA for TrueHoop and ESPN Insider. Follow him @SherwoodStrauss

2. The Knicks: A Summer Spectacle

LAS VEGAS -- Days after the bottom fell out on Linsanity last summer, the New York Knicks' brass made a big show of things at Cox Pavilion for their summer league club's game against the Toronto Raptors.

Raymond Felton, their new starting point guard, loomed about. As did Baron Davis and Amar'e Stoudemire. Allan Houston, Mike Woodson, Glen Grunwald and several members of the front office watched from the red-backed bleacher seats. With confusion over their decision to let Jeremy Lin walk in free agency to Houston dominating league discussion, the sudden appearance of such a large contingent, whether conscious or not, sent a pretty clear message to the world: We're all in this together.

This year, the newest Knick was running the sideshow. Hours after his two-year agreement to return to New York surfaced, a grinning Metta World Peace, almost out of nowhere, popped up around the very same court for the Knicks' summer league game against the Charlotte Bobcats. He made a beeline to the MSG broadcast table for an in-game interview, then held court with a pack of reporters for about six minutes, and then he was gone.

ESPN Staff Writer
Justin Verrier is an NBA writer and editor at ESPN.com.

LAS VEGAS -- In the days, months and years B.C. (Before Cap), Lucas Nogueira was known only as a tantalizing international prospect -- the kind of raw, long, athletic big man teams hope to mold into something game-changing. But in the days A.D. (After Donning), it's become clear that Nogueira has the potential to be something even more impressive: a cultural (visual?) icon.

The draft-day cap, which "Bebe" struggled to keep from bouncing off his head after his name was called at the 2013 NBA draft, established the scale of his afro. No one needed proof of its enormity, but the cap certainly drew up the awe factor. Without playing a single regular-season game, his hair should already be considered in the elite conversation.

A few days after the draft, Nogueira had made it clear that his hair was a part of his identity as a player. "My hair is my marketing," he said. The campaign almost runs itself. Like Harden's "Fear the Beard," Nogueira's hair almost demands "Fear the Fro." But when asked if he'd ever think about growing a Harden-esque beard to match the top of his head, he could only laugh, repeating, "No," over and over.

Perhaps it became too much of a gimmick. After Monday night's game against the San Antonio Spurs, his attitude regarding his "marketing" reversed course a bit.

It appears Nogueira's head is high in the sky, which should surely please the Atlanta Hawks front office. But it raises the question: If his head is in the sky, where in this galaxy is his hair?

Danny Chau writes for the TrueHoop Network and Grantland. Follow him @dannychau

Like a lot of Shabazz Muhammad's box scores, Tuesday's line against the Phoenix Suns featured a conspicuous number of zeroes. Muhammad did not record an assist, steal or block. We've seen little indication in two games in Las Vegas of Muhammad broadening his game beyond scoring. He's struggled with his shot, too, going 6-of-16 in two games. Muhammad does work well away from the ball and shows the ability to catch and shoot coming off screens. He contests shots defensively but must do a better job of locking and trailing to stay close to opponents using the same screens he loves at the other end.

Kevin Pelton is an NBA Insider for ESPN.com.

Andrew Goudelock, Bulls: A crowd-pleasing performance to cap Day 4. Goudelock went 10-for-13 overall and 5-for-6 from 3-point range en route to 31 points in Chicago's 93-81 win over Denver. Could he be a shooter Chicago could use when games get real?

Ben McLemore, Kings: He went 4-of-23 in his debut, then followed it up with a 4-for-12 performance Monday in the loss to the Warriors. He had back-to-back air balls and finished 1-for-7 from 3-point range. 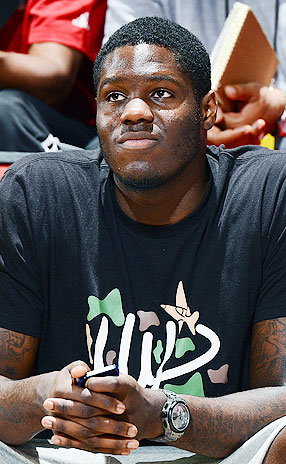 Garrett W. Ellwood/NBAE/Getty ImagesAnthony Bennett, the No. 1 pick of the Cavs, watches his team take on the Pelicans on the floor on which he starred at UNLV. Bennett is still recovering from shoulder surgery in May.

I love Summer League because players wear jerseys of cities they might never even visit.

"The thing was y'all know I like to be adventurous. I have no filter and I have no filter in my creativity. Very bold. I changed my name. So the thing with the Arena Football League was really appealing to me. That was something I mentioned to everybody. And I'm pushing kids to play multiple sports, like Bo Jackson did back in the days."

--Metta World Peace, being his irrepressible self during his first news conference as a Knick