1. Clippers Know The Score, As Do Their Foes

LOS ANGELES -- It's not unusual in an NBA game for a scorer to get so hot that his coach and teammates back away and give him the green light to shoot, no questions asked. The 2013-14 season isn't a week old, but we've already witnessed Kevin Durant, Stephen Curry and Klay Thompson get carte blanche.

There are less frequent occasions when an entire unit claims full license, when an offense is humming so effortlessly that quality shot attempts seem to materialize out of thin air.

Then there are those rare instances when this condition coincides for both teams. All resistance is futile and there's absolutely no friction on the floor. NBA basketball becomes a runaway current, and there's nothing either defense can do to slow the flow. 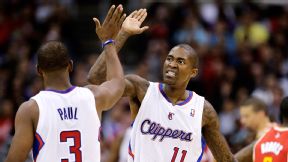 AP Photo/Jae C. HongChris Paul and Jamal Crawford had plenty of points for celebration in the win over Houston.

That's what went down at Staples Center in the first half of the Los Angeles Clippers' 137-118 win over the Houston Rockets on Monday night.

"We were making everything," Clippers coach Doc Rivers said. "A lot of things went right."

When the halftime horn blew, the Clippers' top-ranked offense had dropped 78 points on 56 possessions and each team had logged a 40-point quarter. Chris Paul, J.J. Redick and Blake Griffin got whatever they wanted -- no surprise -- but so did Omri Casspi, Chandler Parsons and Greg Smith.

It was a night when Lawler's Law was merely an injunction, as the Clippers crossed the 100 mark with 1:21 to go in the third quarter. By midway through the fourth quarter, Rockets coach Kevin McHale had that fatalistic look of defeat (a face nobody wore better than McHale's fellow Golden Gopher, the late Bill Musselman).

"I think we can score," Rivers said. "The floor is spaced, and when you have athletes like Blake [Griffin] and [DeAndre Jordan] rolling after they set picks, that creates an action unto itself."

Thats a good approximation of what the Clippers are doing on the floor. The high scores might suggest a full-on, open-court improv show -- and they rank fifth in pace factor -- but the Clippers are finding a slew of open looks within the framework of their set offense.

The Clippers will come down the floor and run through their "floppy action" -- Redick and Jared Dudley fanning out to opposite sides of the perimeter courtesy of screens from Griffin and Jordan. From there, it looks not unlike some of the schemes from the halcyon days of Rivers' Celtics teams. The Clippers run lots of inversions, with the ball swinging to the weak side out of the primary pick-and-roll. We see slice cuts by Redick, 3-man actions that work to get Griffin a touch down low and all kinds of second side action.

"They've got a really potent offense," Rockets forward Chandler Parsons said. "They can hurt you inside. They can hurt you outside. And it's tough to stop both, especially when they're making shots like that."

Per usual, Paul refused to bask in a statistical achievement. Asked to comment on the Clippers' 78 first-half points -- a record for the team since arriving in Los Angeles -- Paul demurred.

This is the rub for the Clippers, who pair their high-octane offense with the league's most porous defense. They're hemorrhaging points to the opposition, and things didn't get any better on Monday.

"It's something our team talks about all day long," Paul said. "In an 82-game season, we're not going to make shots and score like this every night."

The Clippers readily admit they've got a long way to go defensively. A familiar talking point on Monday both before and after the game was the notion that while much of the damage is being exacted in transition, on their opponents' offensive glass and on live ball turnovers, the Clippers are a decent team when they can get their defense set.

Don't buy it, at least not yet. According to Synergy Sports, the Clippers rank 29th in the league in half-court defense (only Washington is worse), and there's clearly more to do than just clean up the peripherals. Big-to-big rotations are still a work in progress, and the second unit is struggling to contain penetration.

After the game, Rivers said something interesting after being asked to appraise how Jordan performed on Dwight Howard during Howard's limited time on the floor.

"We told [Jordan] before the game, 'Youre on an island,'" Rivers said.

Rivers conceded that playing Howard straight up without defensive help might not have been his preferred strategy had the stakes been greater, but the early portion of a season often serves as an extended clinic. Single coverage down low strengthens the principles of a team's base defense -- even if it takes a few lumps on a single night in November.

Asked to cite other examples of tactics he'd employed while giving up 118 points to Houston, he quickly pointed to the team's approach to James Harden, who finished with 15 points in 33 minutes. The Clippers opted to deny Harden in elbow pick-and-roll calls, realizing that a few rollers would squirt through the defense and hurt them. Again, not necessarily a plan the Clippers would pursue in Game 1 of a playoff series, but something Rivers wanted to toy with Monday.

The rollers hurt the Clippers, particularly in the first half, and at a certain point, Clippers assistant Tyronn Lue wanted to switch up the coverage. But Rivers chose to stick with it, even though his team was absorbing blows.

For now on the defensive end, the Clippers will settle for process over results. Viewers take note!

MVP: Andre Iguodala. He scored 27 of his 32 points in the first half, nailing a career-high seven triples to go with his three dunks. As far as shot charts go, Iggy's toed the line of perfection.

Defining moment: With the game tied at 12, Golden State went on a 24-10 run, refusing to cease fire for the rest of the night. Over that eight-minute stretch, Philadelphia went 4-for-18 from the field.

X factor: Downtown accuracy. The Warriors nailed a staggering 15 shots from three, meaning over 40 percent of their points came from beyond the arc. Conversely, Philly made good on just five of its 25 attempts from deep.

MVP: C.J. Miles is the type of player who scores prodigiously and gives you a headache. Tonight he provided the offensive punch the Cavs needed off the bench, finishing with 19 points on 8-for-13 shooting.

LVP: Ricky Rubio had a night to forget. The Spaniard failed to make a field goal on seven attempts. He also did a poor job defending the perimeter, allowing Cavalier guards to blow past him for three quarters.

That was ... frightful: This wasn't a well-played game, but the Cavs were significantly less terrible until the fourth quarter, when they nearly gave away the win with a string of turnovers and defensive lapses.

MVP: When the Grizzlies were desperate for offense in the second half, Jerryd Bayless stepped up and scored all 15 of his points. It was only fitting for him to knock down the two free throws that completely iced the game.

Defining moment. With just under a minute to go, the Celtics had a chance to tie or cut the lead to a point. Instead, they failed to execute and were forced to settle for a Jared Sullinger three and then a heavily contested 3-point attempt from Jeff Green.

That was ... defenseless. Both the Grizzlies (48.6 percent) and Celtics (47.1 percent) shot just under 50 percent. It looked as though the last team to shoot would win. It turns out it was the first to miss would lose.

MVP: Chris Paul. Nobody's been better this season. After logging nine assists in the game's first 10 minutes, Paul never slowed down, finishing with 23 points, 17 assists and some of the shiftiest dribbling you'll ever see on a basketball court.

That was ... spectacular. In the first half, the Clippers tied a franchise record with 78 points, and despite first-quarter foul trouble to Dwight Howard and James Harden, Houston wasn't far behind with 66 of their own. The game was up and down with high-arcing 3s, filthy dunks and a few dozen defensive miscues. Fun stuff for everyone who isn't a coach.

Defining moment. After picking up two fouls in the game's first six minutes, Dwight Howard was whistled for his third with 1:23 left in the quarter. Without their anchor in the middle, Houston struggled from that point on.

Andre Iguodala, Warriors:
Greeted with boos by the Philly faithful, he departed while leaving jaws dropped. Iggy made a career-high seven 3-pointers and scored 32 points during a 110-90 rout of the Cinderella 76ers. Boo the guy traded for a center who ended up never playing a minute?

The Boston Celtics: Off to an 0-4 start, things are going poorly in the winning department, but great on the Tankapalooza floor. The C's squandered a six-point lead with nine minutes to play, hinting at a growing ability to snatch defeat from the jaws of victory. Winless Utah comes to Boston next.

A visual representation of Anthony Bennett's first 4 NBA games. He's now 0-for-15 from the field pic.twitter.com/VabQCMXY1R

"It's very tough to keep doing it each and every night. Tonight, it actually caught up with us."

-- Thaddeus Young, the veteran Sixers forward who was held to six points in the loss to Golden State.

8. Return Of Other AI

Stephen Curry had a triple-double (18 points, 12 assists, 10 rebounds) and five steals in the Warriors win in Philadelphia on Monday -- all while playing only 29 minutes. Curry is the second player to have a triple-double and five steals while playing less than a half-hour since the NBA began tracking steals in the early 1970s. The other player to do that was Denvers Fat Lever, who had two such games, both in November 1987.