1. Raptors Not Sinking In The Low-Tide Atlantic

NEW YORK - Jason Kidd says it's too early to get caught up in the Atlantic Division standings and who's in first place in late January.

And yet on Monday night, the normally stoic Brooklyn Nets coach was as emotional on the sideline in the final seconds of a Nets-Raptors game as if he were sticking daggers against the Boston Celtics in the 2002 Eastern Conference finals again.

When Deron Williams drew a charge off Kyle Lowry with 19.8 seconds left, Kidd went full-on Tiger Woods with a swooping fist pump while the Toronto Raptors' Dwane Casey lost his mind down the sideline.

Make no mistake, Kidd, who made a Hall of Fame career on always looking two steps ahead, knew that Monday night's clash between the Raptors and Nets carried more weight than your average middle-of-the-season game. Both teams played like the division was on the line. 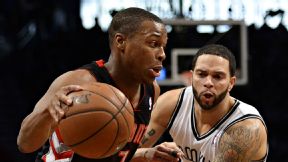 Timothy A. Clary/Getty ImagesKyle Lowry (31 points) kept his team above everything in the Atlantic, sending the red-hot Nets to defeat.

The Nets have been the hottest team in the NBA in 2014, beating everybody in their path except for one team in the New Year - the Raptors.

Toronto, playing without injured DeMar DeRozan, made a statement in Brooklyn, stunning the Nets with a steal off a Williams' inbound pass and a game-winning jumper by Patrick Patterson with 6 seconds left to steal a 104-103 win from Kidd's Nets.

The Nets (20-23) blew a three-point lead in the final 17 seconds and a chance to pull within a half game of the Raptors (23-21). For the second time in 2014, the Nets also watched a five-game winning streak end at the hands of the Raptors.

The Atlantic Division may be the weakest in the NBA. But if Monday's game was a preview of things to come, the Raptors are letting the Nets, and Knicks as well, know that they are going to put up a fight for the division title.

Winning the Atlantic is vital for the Nets and Knicks to have any chance of making noise in the postseason. Both teams have opened this season with extremely disappointing starts and are holding on to the hope of winning the division and earning at least a No. 4 seed.

Potentially making the playoffs as a 7- or 8-seed will be a first-round death sentence against Indiana or Miami. The Raptors apparently are going to do everything they can to spoil the Nets' and Knicks' division hopes.

When the season began, the Atlantic was supposed to be decided by the two New York teams. Toronto, Boston and Philadelphia were supposed to be more concerned with acquiring future assets and lottery pingpong balls.

But Casey has Toronto beginning to think playoffs.

"We want to be in the dance," Casey said before the Raptors' stirring win. "That wasn't our goal going into the season."

The Raptors are showing that they might just crash the big dance despite general manager Masai Ujiri giving the team a makeover by unloading Andrea Bargnani and Rudy Gay. Ujiri also still has a few weeks until the trading deadline to do some more maneuvering (see Lowry), which could change their immediate future.

But the Raptors are defying the odds for now. They are now 16-9 since trading Gay.

"We went into the season talking about developing a Jonas Valanciunas and getting him ready," Casey said. "Now it's [also about developing] Terrence Ross. ... For us having somewhat success, winning-wise, has been a plus, a step ahead of the process."

The Nets entered the season under a completely different mandate. Their championship clock began ticking the moment they traded for Paul Pierce and Kevin Garnett last summer. And their process has been stunning from their tumultuous start to their sudden turnaround in 2014.

Constructed to win it all, the Nets were 11 games under .500 after a New Year's Eve whipping in San Antonio. They looked like a team that was going to completely unravel with drama on the bench and in the locker room, and a slew of injuries threatening to shatter Mikhail Prokhorov's nearly $180-million-plus Faberge egg.

But since that 10-21 start, Garnett had the Nets make a New Year's resolution to turn the season around. Kidd managed to keep the team from falling apart and he continues to grow as the Nets have gone 10-2 since that San Antonio whipping.

Despite their latest setback to Toronto, the Nets still like where they stand with how they are playing.

Things can always change with an injury for the Nets or a trade with the Raptors. But on Monday, the Nets and Raptors played like they're going to be in a fight for the division no matter how much the Nets spend and how much the Raptors try to shed.

"We just want to be in the money at the end of the year," Casey said.

The Nets spent millions to win and the Raptors may very well make the Nets have to earn the Atlantic.

ESPN Staff Writer
Ohm Youngmisuk has covered the Giants, Jets and the NFL since 2006. Prior to that, he covered the Nets, Knicks and the NBA for nearly a decade. He joined ESPNNewYork.com after working at the New York Daily News for almost 12 years and is a graduate of Michigan State University.
Follow him on Twitter »  Ohm's chat archive »

MVP: With the Clippers nursing a 40-34 first-half lead, Crawford scored seven points in less than a minute and a half, part of a 21-2 run by Los Angeles that sealed the game before halftime. Crawford finished with a game-high 25 points.

LVP: Ersan Ilyasova led the Bucks in points, tied for the team lead in rebounds, yet managed to be their worst player. He made just 6 of 22 shots and got drubbed by Blake Griffin (20 points, 8-for-13 shooting) in the paint.

That was ... a free handout: The Bucks coughed up a bunch of soft perimeter passes all game long and the Clippers converted. In the first half, Los Angeles scored an efficient 12 points off six Milwaukee turnovers.

MVP: Derrick Favors showed off his improving consistency for the Jazz, finishing with yet another double-double of 17 points and 12 boards. Favors ended up with with a plus-14 plus/minus for the game.

Defining moment: Sacramento guard Isaiah Thomas left the game with a stomach ailment in the third quarter. After that, without their three most dangerous scoring threats, the Kings looked confused and shell-shocked on both O and D.

That was ... long: Kings coach Mike Malone extended the game with three minutes left, intentionally fouling Rudy Gobert and Jeremy Evans. The strategy brought the Kings closer, but at the expense of giving the Jazz 53 FTAs overall.

MVP: Kyle Lowry was a terror offensively and defensively Monday night, making his case for the All-Star team with a ridiculous 31-point, 7-rebound, 5-assist, 5-steal night on 10-for-18 shooting from the field. His 5-for-5 start helped Toronto get out to an early lead, and his terrific defense on Pierce's last-second heave sealed the win for the Raptors.

LVP: The Nets have been winning games recently despite Joe Johnson going through a tough stretch as of late, which continued through Monday night. Johnson was just 3-for-10 from the field and gave the ball away four times, eventually being benched in the final period in favor of a Deron Williams-Shaun Livingston backcourt.

X factor: Lowry's exceptional outing drowned out the noise Jonas Valanciunas made on this night, completely overpowering Kevin Garnett all game long. Valanciunas finished with 20 points, 13 boards on 9-for-14 shooting from the field and some timely putbacks and interior finishes down the stretch.

MVP: Gerald Green. He was everywhere, hitting four 3-pointers, blocking three shots and making 10-of-12 field goals for 30 points. He scored eight straight fourth-quarter points, including a monstrous slam that put the game away. This was who the Boston Celtics thought they were getting with the 18th pick in the 2005 NBA draft. Seventh team is the charm for this journeyman.

Defining moment: Sixers coach Brett Brown called a timeout 25 seconds into the game, after Suns forward P.J. Tucker blew by Evan Turner for a layup in the opening possession. Whatever he said in the huddle didn't work, because Phoenix went on to drop 40 first-quarter points and 124 on the night.

X factor: Ish Smith. The 6-foot guard can jump, and he showed off his hops with two huge blocks -- one on Michael Carter-Williams and the other on Thaddeus Young. The Suns average only 4.8 blocks per game, but they swatted away 12 Sixers shots Monday night.

X factor: Serge Ibaka didn't have the best of nights, but his six blocks closed the paint against Shelvin Mack and the Atlanta guards, who struggled to get effective penetration in the fourth quarter.

That was ... an amazing performance: DeMarre Carroll and the Hawks defended Durant about as well as you can, but Durant was unfazed by the Atlanta effort, which included the aforementioned shot over three defenders to seal the game for the Thunder.

Kevin Durant, Thunder: Durant scored 41 points, including the game-winning jumper with 1.5 seconds left, and the Thunder rallied from a 14-point deficit in the second half to beat the Hawks 111-109. He had 13 in the fourth.

Elton Brand, Hawks: This isn't quite what you would call stepping up for the injured Al Horford. Brand went scoreless from the field in four shot attempts, but managed to register five fouls in his 15 minutes of action in a 111-109 loss in Oklahoma City.

Kevin Durant: 6th game this season with 40+ points. No one else has more than 2. pic.twitter.com/ASRcrySo2A

-- La La Anthony , who believes her husband Carmelo will stay in New York. 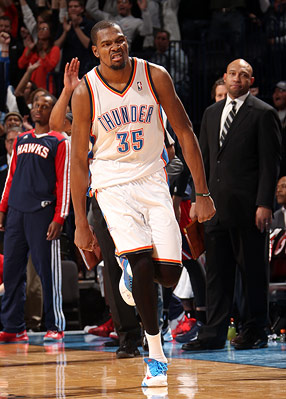 Layne Murdoch/Getty ImagesKevin Durant's 11-game streak of 30 or more points is the longest in the NBA since Tracy McGrady did it in 14 straight games in March and April 2003.

Kyle Lowry's 31 points, seven assists, five rebounds and five steals carried the Raptors to a 104-103 win over the Nets in Brooklyn. No other NBA player had a 30/5/5/5 (points/assists/rebounds/steals) game this season and the only three guys to do that last season were Kevin Durant, LeBron James and Kobe Bryant.

MVP: It was an off night from beyond the arc for Kevin Love, but his 31 points and eight rebounds were more than enough to keep the Bulls' depleted frontline in foul trouble throughout the game. The cherry on top: A perfect 14-for-14 showing from the stripe.

X factor: Taj Gibson, starting in place of Joakim Noah, registered a double-double but was sorely missed by the second unit. Scoring just 11 points all night, Chicago's bench never allowed them to surmount a consistent run. The Bulls scored the first points of the game but never led again.

That was ... ugly: Joakim Noah is not only Chicago's defensive anchor, he's their best playmaker. While the Bulls are well-versed in makeshift offense, a flood of early turnovers kept them out of sync and aided the Timberwolves' transition game. The result: Chicago shot 37.6 percent from the field.