OAKLAND, Calif. -- The game began with a reminder of what John Wall is and what Stephen Curry, for all his brilliance, isn't. Curry managed to pry the ball loose from Wall's handle, and raced down the court in pursuit of a layup. This wasn't the differentiating moment, though. That play came when Wall wrenched Curry's layup attempt out of the sky in a display of athletic prowess the Golden State Warriors guard can only observe and never imitate. Over the course of Washington Wizards' 88-85 win over Golden State, the speed and force of Wall won out over Curry's coordination and deftness.

There's more than one way to be a star point guard, and Wall's star is rising. He's not much of a shooting threat, but his terrorizing defense is a threat to all shooters. If Curry dazzled playoff audiences with 3-pointers from all angles, Wall might loudly announce his playoff arrival with steals and swats that defy geometry. 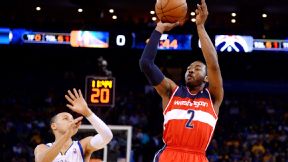 Wall can also, on occasion, hit a necessary 3-pointer. He has already hit more than four times as many triples this season than he did all of last season. On Tuesday night, with the score tied 88-85, he sank one of his biggest off a Trevor Ariza offensive rebound.

When asked what it felt like to hit the big 3-pointer in a game that featured sharpshooters such as Curry, Klay Thompson and Bradley Beal, Wall demurred, "It feels good, but I ain't a definite 3-point shooter like those guys. That's what they do. I just try to expand my game."

For much of the game, Wall had been struggling, converting only 5 of 18 shots until his go-ahead jumper.

"I felt like I had some good looks, just like I did the other night and I just couldn't make them. But I stuck with it and kept playing defense, and didn't let it get me down."

Wall certainly wasn't alone in submitting a defensive effort in lieu of great offensive results. The game certainly wasn't pretty, with both teams shooting worse than 40 percent. Such a style suited a Wizards squad that boasts a better defense than its basic two-man offense. Washington got enough out of its perimeter defenders and perimeter 3-point shooting to survive some balky possessions on the other end.

Washington ultimately sealed the game when they prevented Curry from hitting a game-tying 3-pointer with less than 6 seconds left. Ariza did most of the dirty work after switching onto Curry. When asked about his defensive approach on the play, Ariza smiled and said, "Make him drive to the basket."

The UCLA journeyman did a bit more than that, managing to overcome a pump fake that has tricked many a defender. Ariza explained his process, "Just stay down, no matter what he does. Just stay down, get a hand up and contest, and whatever happens happens." What happened was a hopeful flail of a left-handed leaner that smacked the backboard and eluded the net.

It was Curry's toughest shot of the night, but it wasn't much easier than what Wall and Wizards' other defenders afforded the star shot-maker. Curry finished the night with 23 points on 8-of-23 shooting. The Wizards' guards jumped him from the tipoff, forcing three Curry turnovers if the first six minutes of action.

"We do a great job at contesting shots," Bradley Beal said. "We know he has a quick release. If we give him an inch of space, he's putting it up. I think we did a great job of going over the top on all of his screens, contesting on the side of him if we can't get all the way, just bothering him in any way possible."

Beal did his part offensively as well, pouring in 20 points and helping to fuel a 21-2 Washington run that allowed the Wizards some separation in the third quarter. Beal also had to overcome a shaky shooting start before finding a rhythm. When asked how he got on track, Beal replied, "I just kept shooting. I had amnesia."

Amnesia might be the cure for the Wizards, but this upstart band of roving athletes and their powerhouse point guard might just give us a playoff performance we won't soon forget.

MVP: Mike Conley's 19 points and 7 assists were standard fare for the should-be All-Star this season, but his work on Damian Lillard was superb. He held the deadly point guard to 2-for-9 shooting from behind the arc and just three assists with his hounding defense, keeping Portland's offense from ever starting with ease.

X factor: Perimeter defense. The Blazers looked positively anemic without the open looks they usually get from downtown, where they were 4-for-24 Tuesday night. Credit the Grizzlies for sealing the arc and forcing the Blazers away from their preferred action.

That was ... a statement: Many counted the Grizzlies out of the hunt in the prickly Western Conference months ago, but they're now 7-1 since Marc Gasol's return from injury, and they've done it with impressive wins over the Oklahoma City Thunder, the Houston Rockets and now the Blazers. Take heed.

MVP: Though Bradley Beal scored just 2 points on 1-for-7 shooting in the first half, he more than made up for his early struggles when it mattered most. His three makes from beyond the arc early in the fourth quarter highlighted an 18-point second half and spurred the Wizards to a lead they would never relinquish.

X factor: Golden State's 19 giveaways were almost matched by Washington's 18 turnovers, but a key difference was that the home team's miscues came with the game in the balance. Trying so desperately to recover from Beal's shooting onslaught, the Warriors coughed up the ball five times in the fourth quarter alone.

That was ... ugly: In a matchup that featured offensive talent the likes of Beal, John Wall, Steph Curry, Klay Thompson and more, one would assume offense would flow and points would come easily. Conversely, both teams were frustratingly careless with the ball from the outset, and neither shot better than 38 percent from the floor. Close, competitive games aren't always well-played. This one was a prime example.

Defining moment: Can I say the opening tip? If not, then this game was decided after a 15-0 run made it 21-5 with 4:01 remaining in the opening quarter. As was the case for the rest of the game, the Knicks easily got whatever shot they wanted against the Celtics' tepid, disinterested defense.

That was ... revenge: After suffering a 41-point drubbing by the Celtics on Dec. 8, the Knicks were looking for payback Tuesday night. Mission accomplished. Granted, it's not like Boston put up much resistance. There's tanking and there's not even bothering to show up.

MVP: Andre Drummond (13 points, 17 rebounds) was disruptive on both ends of the floor, particularly on the defensive end, where his size made it difficult for the Magic to score at the rim.

X factor: Rodney Stuckey (13 points) and Kyle Singler (12 points) both provided a spark off the bench for the Pistons. Stuckey, in particular, was a pest on defense. E'Twaun Moore could barely dribble against Stuckey at times.

Defining moment: Trailing 53-43 at halftime, Orlando was able to cut the deficit to 61-55 midway through the third quarter. But Detroit responded by finishing the period on a 17-5 run to blow the game wide open.

MVP: Anthony Davis didn't discriminate, he swatted every Cavalier that dared come into the paint. And if his eight blocks weren't enough, he dropped 30 points on 18 shots, including two key jumpers to ice the game down the stretch. Davis had zero turnovers and just one foul. Flawless victory.

X factor: The Pelicans have been looking for a big man to give them solid minutes since Jason Smith and Ryan Anderson went down with injuries, and Greg Stiemsma gave them that Tuesday night. Stiemsma went 4-fo-5 from the field, scoring nine points while grabbing 11 rebounds off the bench. In addition, he blocked two shots and changed countless others.

That was a ... confidence booster: Coming into Tuesday night, Anthony Bennett was struggling, but he did just enough to encourage Cavs fans moving forward. He calmly hit a pair of 3-pointers and got to the rim a couple of times as well. His 15 points are more than he had scored in every other game in January combined.

MVP: With the Rockets down 15 early and Dwight Howard ineffective, Terrence Jones made sure the house didn't crumble. He finished with 21 points and 9 rebounds on 9-for-12 shooting.

Defining moment: In the third quarter, Manu Ginobli injured his left hamstring on a thunderous dunk that tied the game. The Rockets scored on the next possession, Ginobli left, and the Rockets never trailed again.

Anthony Davis, Pelicans: Davis had 30 points with 8 blocks and 7 rebounds in the Pelicans' 100-89 win over the Cavaliers. With New Orleans hosting next month's All-Star Game, Davis looks like a good candidate when reserves are named Thursday.

Trail Blazers' bench: Six Portland reserves combined to shoot 2-for-16 from the field, good for six points in the 98-81 loss to Memphis. Mo Williams' 1-for-7 night set the tone.

"Individually, he can't be stopped by any one-on-one player. There's nobody that can guard him one-on-one."

-- LeBron James , noting the prowess of Kevin Durant, whom he faces on Wednesday. 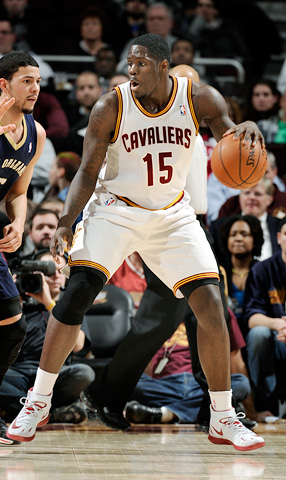 Zach Randolph scored 23 points and had 10 rebounds in the Memphis Grizzlies' win over the Portland Trail Blazers. It was the fifth time in his career that Randolph had a 20/10 game against his former team. He did it once for the New York Knicks, once for the Los Angeles Clippers and three times for the Grizzlies. That ties him with Maurice Lucas for the most 20/10 games against the Blazers by a former Portland player.

MVP: David West set the tone for Indiana, bullying Ryan Kelly right off the bat for seven first-quarter points. There wasn't a matchup the Lakers threw at West that he didn't make mincemeat out of, finishing with 19 points on 8-for-14 shooting. He also had eight boards.

LVP: Paul George was unlike himself Tuesday night, at least offensively. George never found his offensive flow, shooting just 4-21 from the field to finish with 14 points. This isn't a common occurrence, but nevertheless disappointing.

Defining moment: The Pacers got off to a 10-2 start in the third quarter, eventually taking the period 30-20 to head into the fourth leading by double digits. The Lakers never made a strong comeback, and Indiana rode their lead to the W.