PORTLAND, Ore. -- At the end of three quarters, the Portland Trail Blazers and the Oklahoma City Thunder were tied on Tuesday night. At the end of four, the Thunder had survived a final minute full of lead changes and agonizing reviews to eke out a 98-95 road win. And at the end of four games between the two teams, they are tied once again -- not just 2-2 against one another, but tied at 401 points apiece in their four meetings.

Perhaps there are no real rivalries in today's NBA, but what's developing between Portland and Oklahoma City is starting to come close. The series has featured a game in which LaMarcus Aldridge outdueled Kevin Durant -- a close, team-oriented win for the Blazers -- and most recently, two narrow wins for Oklahoma City in which a visibly fired-up Kevin Durant has been the difference. 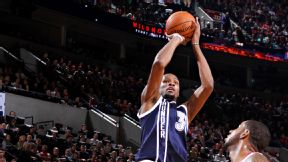 As was the case in the teams' last meeting, Durant spent much of Tuesday night's game playing with an edge, and the Blazers found themselves unable to dull it. Just as in the last meeting, Durant was issued a technical, his second against the Blazers compared to a total of nine all season. Unlike last time, when Durant slammed the door with consecutive long-distance daggers, Tuesday featured a sloppy, frenetic finish that seemed like a sustained scrum to decide the contest. At the end, the Thunder were better, and Durant -- averaging 38 points on 54 percent shooting against the Trail Blazers -- was once again the largest reason.

One new wrinkle introduced Tuesday was the major contributions from role players on each side. The Thunder have risen to the top of the NBA largely because of their improving young supporting cast, while the Blazers did more than perhaps any team to bolster their back half in free agency. For the Trail Blazers, rookie C.J. McCollum followed up a strong weekend performance to post 13 first-half points on five shots, but Oklahoma City's Jeremy Lamb topped that with a hyperefficient 19 points on 8-of-11 shooting.

And so this nascent rivalry has what any good series should: variety, a fleshed-out supporting cast and stars who can carry a drama over a long run. Most of all, though, it has the tension to keep viewers coming back. If his demeanor on-court didn't send a clear enough message, Durant was emphatic, and terse, postgame. Asked if the game felt like a postseason atmosphere, he simply said "Nah. Regular-season game."

As is their way, the Blazers were a little more even-keeled. Damian Lillard attributed the intensity to the Blazers' respect for the Thunder's position: "They're at a level that we want to be at. When we see them, that's what we think about. They've been to the Finals, and they're always a top team in the West, and that's where we're trying to get to. When we see them, it's gonna be really competitive."

The reality is that, while both of these teams know they're in a playoff chase, the Thunder have the upper hand, even if by a narrow margin. Durant is correct to point out Russell Westbrook's absence, and the Blazers have fallen short of their torrid early-season pace as Oklahoma City seems to have found another gear amidst what might have been serious adversity. The teams have seen a subtle reversal in fortune since early season, with the Thunder now the team racking up more wins than even optimists might have guessed.

It's enough, clearly, to lend these games a little more weight, and fans can only hope this series gets a much-deserved postseason renewal. Catching himself somewhat after voicing his dislike for the Trail Blazers, Durant hedged, saying that "in all four games, both teams played extremely hard, and you gotta enjoy that kind of basketball." Though it seemed doubtful whether he did, the clear tension makes sure fans will.

Danny Nowell is part of the TrueHoop Network. Follow him @DMNowell

MVP: Durantula. Slim Reaper. Whatever you want to call him, Kevin Durant continues to show why he's the prohibitive favorite to win the MVP award. He was otherworldly, making some ridiculous shots en route to a 36-point, 10-rebound performance.

Defining moment: With the Blazers trailing 96-95 with 12.3 seconds left, the ball went to LaMarcus Aldridge, but he missed a potential game-winning shot from midrange. Aldridge struggled shooting from the perimeter all night long.

X factor: Anthony Tolliver torched Dallas with 22 points, including five made 3-pointers. With the focus inside on Big Al, Tolliver took full advantage of a scrambling Maverick defense.

That was ... helpful. The Bobcats finished with an absurd 42 assists on 45 made baskets (a 93 percent assist rate). They were lead by Josh McRoberts, who dished out 13 helpers from the power forward position.

MVP: Anthony Bennett was the best player on the floor tonight. Yes, you read that correctly. The Cavs rookie, who's struggled for much of the year, had his best game this season. Bennett recorded his first career double-double, finishing with career highs in points (19) and rebounds (10).

X factor: Three-point shooting was a difference-maker in this one. The Kings and Cavs both shot above 45 percent from the field for the game. However, the Kings had no answer for the Cavs from beyond the arc, who finished 12-of-21 from deep.

Defining moment: The Kings struggled to defend the 3 all night, but no 3 was more devastating than the one Bennett connected on late in the fourth quarter. After grabbing his 10th rebound, the Cavs rookie proceeded to sink a 28-foot 3-pointer that pushed the Cavaliers' lead to 15.

MVP: Joakim Noah, who had the fourth triple-double of his career with 19 points, 16 rebounds and 11 assists. As if that wasn't enough, Noah also recorded three blocks in his domination of the Hawks.

X factor: With Noah nearly putting up that triple-double in the first half, Taj Gibson's night went somewhat unnoticed. Gibson finished the game with 24 points, 12 rebounds and five assists.

LVP: Atlanta's Paul Millsap, who actually hit three 3-pointers but was just 3-for-9 on 2s. Millsap seemed very hesitant on open shots and ruined the Hawks' rhythm with his weird decision-making when they were only down eight in the fourth.

MVP: Nick Calathes! The former second-round pick outstripped his modest draft pedigree, scoring 18 points and frustrating John Wall (5 points) into Wall's worst game in recent memory. The phyllo on top of the spanakopita was his driving layup and-1 with 4:33 left in the fourth, breaking an 82-82 deadlock.

X factor: Bradley Beal has been practicing his 3-point shot in preparation for this weekend's festivities, and it showed. Beal (5-for-7 from beyond the arc) scored a career-high 37 points in the loss but missed an open shot with 12 seconds left in the fourth quarter that would have tied the game.

That was ... shrill and disorienting: Early whistles against Marcin Gortat limited him to five first-half minutes and allowed the Grizzlies to govern all activities in and around the paint. Memphis ambushed the Wizards with 28 first-half paint points compared to Washington's 10.

-- Conor Dirks, Truth About It

MVP: LeBron James scored 12 points in the first half with a passiveness quite normal for him. It wasn't enough without Dwyane Wade, who was out with a migraine headache, so James started the second half with a deep ball within the first minute and finished with 37 points.

X factor: Miami's ball denial hurt Phoenix's ability to get anything going the half court. While the Suns got theirs in transition, the Heat held them to 30 paint points and turned bad interior and perimeter passes into 24 points off turnovers.

Defining moment: Chris Bosh went an efficient 8-of-11 for 21 points, but a late 3-pointer off a James pass made it a 99-92 Heat lead with 40 seconds left in the game. Phoenix didn't have enough time to mount a comeback.

Joakim Noah, Bulls: Noah just won't let the Bulls go gently into that good tank. He scored 19 points as part of his first triple-double of the season in the Bulls' 100-85 win over the Hawks. His fourth career triple-double came with 16 rebounds and 11 assists.

Los Angeles Lakers: Even the all-Steve backcourt (Steve Blake, Steve Nash) couldn't right the ship against the Utah Jazz. Blake and Nash combined to shoot 3-of-15 from the floor in a 96-79 loss in Salt Lake City.

Congrats @anthonybennett on the 1st of countless double/doubles you will toll. Proud of you for ignoring the malcontents. Keep grinding!

"I'm going to be one of the top four that's ever played this game, for sure. And if they don't want me to have one of those top four spots, they'd better find another spot on that mountain. Somebody's gotta get bumped, but that's not for me to decide. That's for the architects."

-- LeBron James, on whether he'd make the cut for a hoops Mount Rushmore. 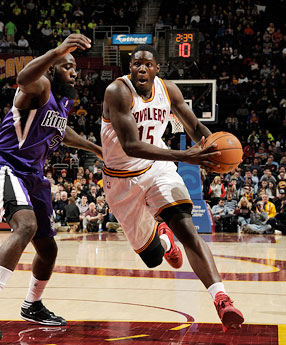 David Liam Kyle/Getty ImagesAnthony Bennett, the much-maligned No. 1 pick in the NBA draft, had 19 points and 10 rebounds -- both career highs -- as the Cavaliers avenged a 44-point loss to Sacramento with a 109-99 win over the Kings.

Nick Calathes scored 18 points and handed out six assists in the Grizzlies' win over the Wizards. Calathes was inserted into the Grizzlies starting five in place of the injured Mike Conley on Feb. 1. Since then, Calathes leads the Grizzles in assists (28), steals (14) and 3-point field goals made (9), and only Zach Randolph (108) has scored more points than him (91).

MVP: Once Alec Burks entered the game in the opening moments of the second quarter, he changed the tone of the entire game. From the field (8-for-11 shooting) to the charity stripe (7-for-11 from the free throw line), Burks was the standout performer in Utah's victory over L.A.

Defining moment: As previously mentioned, the tide of the game turned to Utah's favor in the second quarter. By utilizing quickness and aggression, Utah's bench was able to take advantage of L.A.'s depleted depth to the tune of 51 points.

That was ... depressing: Besides a few small bursts, L.A. was just a slow and tired team throughout the game. While Chris Kaman had an excellent 25-point, 15-rebound performance, the rest of the Lakers were unable to keep up with Utah's young and vibrant team.