LOS ANGELES -- You can't miss what you never had, and Los Angeles Lakers fans never had this version of Dwight Howard, the one that dismissed their hearty boos with 20 points, 13 rebounds and three blocked shots in only 28½ minutes of play Wednesday night in his first game back on the Lakers' home court since his lone, ill-fated season in L.A.

Howard was only months removed from back surgery when the Lakers traded for him in the summer of 2012. His timing was off, his vertical leap was reduced, his medical reports were so scary that when the Rockets first examined him after signing him to an $88 million free-agent contract in 2013 the doctors were aghast at what they saw. 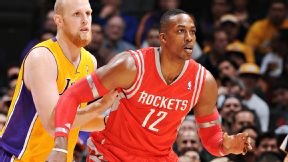 Andrew D. Bernstein/NBAE/Getty ImagesDwight Howard, more spry than he was in his lone Laker season, shredded his former team.

"I just wish I would have waited until I got healthier to play," Howard said of his time with the Lakers. "Coming off back surgery is tough. I wanted to come out here and show the fans here that I'm about winning. Unfortunately I just wasn't healthy enough, and neither was the team."

Howard added a torn labrum to the medical report during the season, but still managed to play in 76 games. That was 26 more games than Steve Nash, and he also managed to outlast Kobe Bryant, who tore his Achilles tendon in the Lakers' 80th game of the season. Howard averaged 17.1 points, 12.4 rebounds and 2.5 blocked shots for the Lakers.

"I'm a lot healthier than I was," Howard said. "Last year I can recall some games where I was going up to try to dunk and I just didn't have the legs to finish it. This year I'm able to do that. I'm still getting healthier, which is great."

He never seemed as intense as he was at the start of Wednesday night's game, when he seemed to feed off the boos raining down on him.

Howard made a left-handed hook shot on the Rockets' first possession. Then he blocked a Kendall Marshall shot and grabbed a rebound in one defensive sequence. He had six points (including two dunks), two rebounds, a blocked shot and a steal in the first two minutes. In addition he had a technical foul for an emotional reaction to one of his dunks, which Howard said was merely directed at a friend hitting courtside.

Most of the fans were in no mood to joke with Howard. They booed him in the introductions and every time he touched the ball. They cheered every one of his missed shots and turnovers.

When the scoreboard screen showed fans who had altered their Howard Lakers shirts to read "Coward," it drew some of the loudest cheers of the night. Dwight was too busy yucking it up with teammates on the bench to notice.

He was done for the night after three quarters. The Rockets dismantled the injury-depleted Lakers squad that was down to eight active players after trading Steve Blake to Golden State in a salary-shaving move before the game.

While the Rockets won their eighth consecutive games, the Lakers dropped their eighth in a row at home. This Lakers season is so abysmal it makes last season's tumultuous, underachieving saga seem like the good old days. Even Howard could muster one good memory of his days in L.A.

"Sprinkles," he said, referring to the high-end cupcake shop.

With that bit of info, guess we can't say there was nothing sweet about his limited stay in Lakerland. It just wasn't as good as what he's got now in Houston.

MVP: Andray Blatche!? Surprisingly, the former Wizard is the night's MVP after he shredded the Jazz's weak paint defense with nine field goals in the restricted area. His 25 total points tied his season high.

LVP: Gordon Hayward improved on his 3-for-17 shooting performance in the Jazz's last game ... by going just 3-11 on the night. According to NBA.com's player tracking tool, nine of those 11 shots were uncontested. Eesh.

Defining moment: Utah looked on their way to a fourth consecutive win with a 13-point third-quarter lead. Then the Nets went on a 20-4 run; 17 of those points were scored by Joe Johnson or Blatche.

MVP: The Morris twins receive a joint MVP award. Markieff tallied an efficient 18 points on 7-for-12 shooting, while Marcus had the biggest momentum-changing shot: a 32-foot bomb to end the third quarter that gave the Suns a five-point lead.

LVP: Phoenix had the win locked up before three shooting fouls in the final 1:08 by P.J. Tucker helped give Boston a chance to tie with 23 seconds remaining. But the Celtics missed a pair of layups, and the Suns hung on.

That was ... encouraging: Rajon Rondo's line may not look pretty (7-for-22 from the field, 0-for-2 from 3-point range), but his stroke looks smooth, and he dished out 10 assists. He still doesn't appear to fully trust his knee, but he's beginning to trust his teammates.

MVP: Kevin Love and Ricky Rubio have to share this honor like peanut butter and jelly. Love finished with 42 points and 16 rebounds, his 14th 30/10 of the season (most in the NBA) and Rubio set a career high with 17 assists.

Defining moment: In the first 5:12 of the second quarter, Indiana watched Minnesota's lead balloon from 30-20 to 40-20, largely while the benches were out there. Indiana tried to punch back but just couldn't get a grip on Minnesota, in spite of Paul George's 35 points and 11 rebounds.

That was ... the Kevin Love show: Indiana's vaunted defense holds opponents to 41.2 percent shooting, and Timberwolves not named Love shot 43 percent. But Love was 14-for-22 from the field, including going 5-for-10 from beyond the 3-point arc.

MVP: As usual, Joakim Noah held down the fort on both ends of the floor. He anchored the defense and held Toronto to 42 percent shooting from the field. Noah also directed traffic in the high post and posted a career-high 13 assists.

LVP: Jonas Valanciunas' disappointing sophomore season continued with this stinker. He was totally dominated by Noah and managed to score two points in 22 minutes.

X factor: Before the game, everyone in Toronto giggled about D.J. Augustin potentially having a "revenge game" against the club that cut him, but it was Augustin who got the last laugh. He scored 19 points, including 13 in the fourth to lead his Bulls to victory.

MVP: John Wall, who had 21 points, five rebounds and 12 assists. It was the ninth 20-10 game on the season for the first-time All-Star.

Defining moment: At the end of the third quarter, Ariza hit a three-quarter-court heave at the buzzer to give the Wizards an eight-point lead that killed the Hawks' comeback effort.

MVP: The Cavs' Kyrie Irving (22 points, 7 rebounds, 7 assists) and the Magic's Nikola Vucevic (20 points, 12 rebounds) were the co-MVPs in this game. They each played well for their respective ballclubs.

Defining moment: With Cleveland clinging to a 94-89 lead, Irving was able to sift through Orlando's defense and find Luol Deng for a corner 3-pointer with 35.9 seconds left that served as the dagger.

That was ... another win: It has been an up-and-down season for the Cavaliers, so you can forgive Cavs fans if they're downright giddy about the team's sixth straight win. Cleveland hasn't seen a winning streak that long since the LeBron era.

MVP: Kemba Walker and Al Jefferson. Walker had a career-high 16 assists compared to 20 for the Detroit Pistons, while Jefferson scored 29 points, had 12 in the third quarter, and frustrated both Andre Drummond and Greg Monroe.

Defining moment: Detroit was down by six at the half, but Charlotte started the third quarter with a 17-3 run. That stretch gave the Bobcats a comfortable lead, one which the Pistons battled valiantly against but could never seriously dent.

LVP: Josh Smith did have an incredible transition dunk, but that does not erase 14 points on 18 shots with four rebounds. He forced his shot far too often, and let's not talk about his three 3-point attempts, all of which missed.

Kevin Love, Timberwolves: Love had 42 points and 16 rebounds as the Wolves took down the East-leading Pacers 104-91. It was Love's eighth straight game with at least 25 points and 10 rebounds, the longest streak since Shaquille O'Neal accomplished the same feat Jan. 3-19, 2005.

Los Angeles Lakers: When booing Dwight Howard is the highlight of the night in a 134-108 trouncing by Houston, then things are not going well. The Lakers just fell into a tie for basement honors in the West with the Kings. At least Swaggy P is coming back soon.

Telling your kids daddy can't live with us anymore until this summer is just as heartbreaking the third time around as it was the first two.

"I just wish I would have waited until I got healthier to play. Coming off back surgery is tough. I wanted to come out here and show the fans here that I'm about winning. Unfortunately I just wasn't healthy enough, and neither was the team."

-- Dwight Howard, after his winning return to Los Angeles. 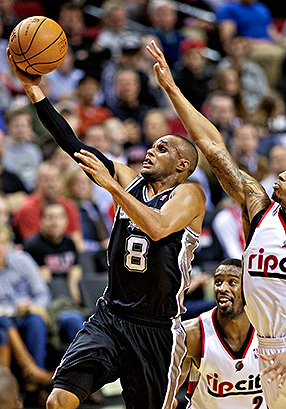 Craig Mitchelldyer/USA TODAY SportsWith Tim Duncan and Tony Parker both out, Patty Mills came off the bench to score 29 points as San Antonio rallied in the second half to pull out a 111-109 victory over the Blazers.

Carmelo Anthony scored 42 points on Wednesday; the New York Knicks' four other starters combined for 17 points and none had more than six. Anthony's percentage of starters' points -- 71.2 percent -- was his third-highest in any NBA game. In his 62-point game on Jan. 24 he had 75.6 percent of points by Knicks starters and he had exactly 75 percent in a 45-point game on New Year's Day 2013.

MVP: It may have been Dwight's return, but James Harden had 29 points, 11 assists to just one turnover. He scored the last 11 points for Houston in the third quarter, and temporarily quelled the concerns about his defense with four steals.

Defining moment: On the very first play, Dwight Howard sank a hook shot. On the next play, he spun and dunked. And then he scored again. Howard's play against the Lakers on Wednesday night was particularly fierce for some peculiar reason.

LVP: Chris Kaman was completely and totally overmatched by Dwight Howard. Howard had two particularly vicious blocks on Kaman in the post, Kaman finished with only eight points on 11 shots.

MVP: Patty Mills has been incredible, and that's the only word to describe him after the Spurs' 111-109 win in Portland. Mills went for 29 points in 29 minutes and continues to be the Spurs' lifeblood through this awful stretch of injuries.

X factor: Marco Belinelli, the reigning 3-Point Shootout champion, hit a massive 3-pointer with the game tied and 1:34 remaining, and the Spurs never gave up the lead from there. He just continued what has arguably been the best season of his career.

That was ... Spurs basketball: San Antonio has been under scrutiny for not being able to beat the NBA's best. But the hugely shorthanded Spurs have now defeated the Clippers and Blazers in consecutive road games to maintain the second seed in the West, and Kawhi Leonard is expected to play on Friday after missing a month due to injury.