SACRAMENTO, Calif. -- While Dwight Howard strutted around the Rockets' locker room doing his best Charles Barkley impersonation, James Harden sat quietly in the corner with ice bags on his knees and his feet soaking in a giant bin of ice water.

You would never know that the 24-year-old wing had just single-handedly destroyed another NBA team on its home floor. As he sat with his camo headphones on, looking as though he didn't have a care in the world, the Sacramento Kings were a few hundred feet away, dealing with yet another DeMarcus Cousins meltdown. 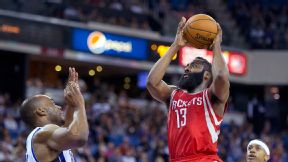 It was all Harden, from start to finish in this one. After scorching the Kings for 22 points on 7-of-10 shooting in the first quarter, he fell three points shy of his career-best 46 points.

If only Rockets coach Kevin McHale would have let him play in the fourth quarter.

"He just took over," Howard said of Harden. "He hit a lot of 3s, got to the free throw line and he attacked the basket, which we need him to do all game."

The Rockets led by as many as 31 points in the first half and continued to keep the pressure on Sacramento for the entire game.

"We got on them early and got a big lead and kept it all game," McHale said. "It was a great start by the guys, their defense was solid, they got out and ran, and James had a phenomenal first quarter and a great game."

It was a tale of two teams headed in decidedly different directions. While Harden was running a layup drill and Howard was dominating the post, the Kings were falling apart at the seams like they have done countless times this season.

Cousins tried to will his team back into this game in the second quarter, finishing the first half with 16 points and five rebounds. But Sacramento still trailed 69-51.

Harden continued his assault on the Kings' defense in the third, and Cousins began to lose his cool. After picking up a questionable touch foul on a missed layin by Howard, the fourth-year center picked up his 14th technical foul of the season for jawing at veteran official Courtney Kirkland.

Before coach Michael Malone could get his center out of the game, Cousins picked up his fifth foul and the wheels were falling off. Malone called a timeout and pulled his big man from the game at the 8:21 mark of the third, but it was too late; the fuse had been lit.

While Malone asked for an explanation from Kirkland, an agitated Cousins had to be restrained by Kings assistant coach Corliss Williamson. The outburst was too much. Cousins picked up his 15th technical and headed to the locker room for an early shower, but not before making quite the scene on the Kings' sideline.

"It's an emotional game, and I'm pretty sure when we play against each other, it's very emotional," Howard said. "He wants to win. He wants to play his best, so he let his emotions get the best of him tonight."

Cousins is just one technical away from earning a one-game suspension. Emotions or not, the Kings are 0-8 on the season without their star center. If he wants to be an elite center in the NBA, he needs to learn that he is hurting his team with each and every one of these outbursts.

With a marquee matchup against the Los Angeles Clippers on Wednesday at Staples Center, the Rockets got just what the doctor ordered -- an easy win in Sacramento. McHale rested his stars most of the second half and went deep to his bench.

"It's going to be a big game [Wednesday] night," McHale told reporters after the game. "We've been on the road for a while now. It's the last game of a five-game road trip, we're 3-1, and we have to go in and play a good Clippers team."

The Rockets are third in the Western Conference standings and riding high on their way to the playoffs, while Sacramento is headed for another turn in the lottery and left wondering when Cousins will grow up.

MVP: Paul George scored 12 of his team-high 20 points in the decisive third quarter. He filled up the stat sheet with seven rebounds, six assists, two steals and a block.

Turning point: At halftime, the Lakers trailed by just three. To begin the third, Indiana cranked up its intensity, particularly on defense, and blew the game open, outscoring L.A. 34-16 in the period.

That was ... total domination: Indiana had seven players in double figures, including all five starters. In his first game as a Pacer, Evan Turner had 13 points in 26 minutes. Total, Indiana grabbed a season-high 21 offensive rebounds.

MVP: DeMar DeRozan recovered from a slow start to steal the show, finishing with 33 points, six dimes and four rebounds. DeRozan was key down the stretch, closing the game with huge plays on both ends -- a reverse dunk and a game-sealing steal.

X factor: Terrence Ross was a major contributor, and has been since taking Rudy Gay's slot in the starting lineup. Ross connected on five of eight long bombs, finishing with 19 points and two steals on the night.

Defining moment: DeRozan stole a bullet to a cutting Tyler Zeller, getting fouled on his breakaway to ice the game-sealing free throws with 27 seconds to play. DeRozan put his Raptors up five on the play, but it was certainly controversial as he collided with Zeller on the takeaway.

MVP: Joakim Noah, whose defense came alive in the fourth quarter, when he came away with three steals against the Hawks. He also had 20 points, 12 rebounds and three assists to go with those clutch takeaways.

Defining moment: With 14 seconds left and the Hawks down only one, Jeff Teague drove to the basket and appeared to have a step. However, the Bulls' defense recovered and forced Teague to the baseline, causing the Atlanta PG to turn the ball over by stepping out of bounds.

That was ... classic Thibs: Coach Tom Thibodeau has a rep for playing his starting small forward a lot of minutes, whether it be Luol Deng or Jimmy Butler. This time it was no different with Mike Dunleavy, who played all but nine seconds of this game.

MVP: Does 33 points, 13 rebounds and nine assists spell game MVP? Kevin Love put up that stat line Tuesday night, drilling a 3-point shot with 30 seconds left that was the dagger.

Defining moment: Following a first half in which the Suns scored 57 points and shot 54 percent, the Timberwolves finally found their defensive chops late in the game, holding Phoenix to 0-of-8 shooting in the final three minutes.

That was ... Shabawesome: Minnesota rookie Shabazz Muhammad played just his fifth game of double-figure minutes and scored a career-high 20 off the bench. Ten of those points came in the final frame.

MVP: J.J. Hickson ripped down 13 of his career-high 25 rebounds in the fourth quarter as his hustle essentially kept the Nuggets in a game they should have been out of halfway through the third quarter.

X factor: Portland shot just 4-for-21 in the fourth quarter, but a 3-point dagger from Nicolas Batum made up for everything, as it put the Blazers up seven over Denver with 40 seconds left in the game.

That was ... a comforting loss: After Brian Shaw took a flamethrower to his team following its poor effort in back-to-back blowouts, the heart Denver showed in coming back to make the game competitive has to feel good.

James Harden, Rockets: Harden scored a season-high 43 points before resting for all of the fourth quarter (saving his legs for the Clippers on Wednesday), and the Rockets routed the Kings 129-103. Harden shot 11-of-20 from the floor, made 15 of 16 free throws and added eight assists, three steals and two rebounds.

DeMarcus Cousins, Kings: Another night, another Boogie down production. Cousins had 16 points and six rebounds for the Kings before getting ejected for vehemently arguing with an official in the third quarter. He picked up his NBA-leading 14th and 15th technical fouls. The next one earns him a one-game suspension.

"I don't think there's a lot of discipline right now."

-- Pau Gasol, on the current state of his West-worst Lakers. 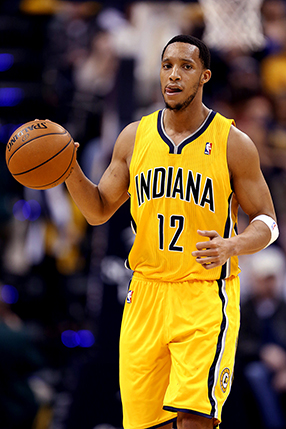 Brian Spurlock/USA TODAY SportsIn his first game with the Pacers, Evan Turner finished with 13 points and six rebounds in a 118-98 win over the Lakers.

MVP: James Harden had 22 points in the first quarter, 30 in the first half, and finished with 43 points -- three shy of his career high -- in just three quarters, and all on a mere 20 shots.

X factor: Sacramento rallied to cut Houston's lead to 15 at the start of the third quarter, but DeMarcus Cousins' ejection after an argument with the referees pretty much shut down any hopes for a miracle comeback.

LVP: Sacramento's shooters, namely Ben McLemore and Isaiah Thomas. With Dwight Howard and Omer Asik guarding the paint, the Kings needed to hit jumpers to compete with Houston's high-powered offense. But McLemore and Thomas were 3-for-13 from long range.

MVP: When the jump shot is falling for him, John Wall is practically unguardable. And that's what happened against the Magic, as Wall (27 points, 7 assists, 5 rebounds) sprinkled in jumpers alongside his layups and dunks.

X factor: Trevor Ariza (22 points), Marcin Gortat (21 points, 10 rebounds) and Bradley Beal (21 points) were all outstanding. The Wizards can only hope they continue playing that well with Nene sidelined with a sprained left MCL.

That was ... another road loss: Orlando's 16th consecutive road loss ties a franchise record. With the Magic playing the Sixers (losers of 11 in a row) on the road on Wednesday, something's got to give between two teams on major losing streaks.