SAN ANTONIO -- Gregg Popovich chuckled before the game at the notion of having to remember how to coach his full lineup. With Tony Parker back in action for the Spurs ahead of Sunday night's 112-106 win over the Dallas Mavericks, San Antonio boasted its regular rotation for the first time since Tiago Splitter went down with a sprained shoulder on Jan. 4.

"I'll do my best," he said with a laugh before the game. 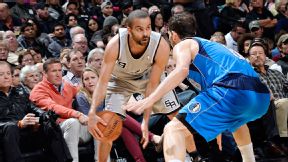 D. Clarke Evans/NBAE/Getty ImagesWith 23 games left in the season, Tony Parker returned with a strong start to the stretch drive.

Popovich didn't have to adjust too much, as Parker slotted into his usual starting point guard spot and showed little in the way of rust as he scored 22 points on 10-for-15 shooting against the Mavs and had seven assists, turning the ball over just once.

Outside of a handful of minutes in the All-Star Game, it was Parker's first action since he played 20 minutes in a Feb. 10 loss to the Pistons.

"He looked really fresh and didn't lose any rhythm it didn't look like," Popovich said afterward. "He played very well."

The Spurs started off the night testing out the Spur boasting the most recent clean bill of health. On the first play of the game, Parker drove through the lane to his right and got a layup. On the next trip down the floor he again got into the lane, this time he kicked out to Kawhi Leonard on the wing for a 3-pointer.

"I usually come back slow, limited minutes, can't make a shot, and he was sharp," Manu Ginobili said, with not a hint of jealousy in his tone.

After the first quarter, Parker had already cracked double digits in scoring and the Spurs looked closer to themselves, not the patchwork squad that somehow scraped together a 17-8 record in the time since Splitter went down with a shoulder sprain. Parker, Ginobili, Danny Green and Kawhi Leonard have all missed time with various ailments since the injury to Splitter.

For the most part, Parker looked like himself. His jumper was falling and he moved well on the defensive end. The only box Parker didn't tick off of his checklist was showing the same burst in transition that typically strikes fear into opposing coaches and makes Parker the closest thing the league has to a one-man fast break.

On one play in the first half, Parker received an outlet pass in the middle of the floor with the Spurs boasting a 3-on-2 advantage on the break. Parker dribbled upcourt facing a backpedaling Dirk Nowitzki, but attacked the rim harmlessly with a spin move and missed a shot near the rim.

With Parker back in the lineup, the Spurs have 23 games left to get back their rhythm, fine-tune the rotation, and get ready for the playoffs.

"Hopefully everybody can stay healthy and we can try to make a run at it," Parker said. "Everybody recharged their batteries, everybody should be fresh.

"As long as we stay healthy and we play our best basketball when the playoffs come, that's the main thing."

Nothing is guaranteed, least of all health, but the Spurs have all their guys back at a convenient point in the season. There's enough time left to work out the kinks and take their lumps as the playoffs approach, with the end goal for Gregg Popovich & Co. to peak at the right time.

"You just play and try to be at your best come playoff time," Popovich said.

There is plenty of work to do before the postseason for San Antonio, which trails the Oklahoma City Thunder for the Western Conference's top seed by 1 1/2 games, but Popovich remembering how to coach them shouldn't be an issue.

MVP: DeMar DeRozan played arguably his best game of the season, pouring in 32 points on just 16 field goal attempts. He also chipped in 6 assists and 4 rebounds. The newly christened All-Star is coming into his own this season, and his development is deserving of more attention.

X factor: Stephen Curry did everything he could to help his team win. He scored 34 points, had 7 dimes and snagged 4 rebounds, but he and his Warriors simply couldn't hold on to the ball down the stretch.

That was ... not very clutch: The Warriors turned the ball over on three straight possessions in the final two minutes of the game, which effectively sealed their fate. With the Raptors leading by just four points, Curry lost a ball out of bounds, he threw an errant pass, and Bogut tossed an ill-advised pass right into the hands of a Raptors defender.

MVP: David West. He doesn't get the MVP buzz that Paul George does or the DPOY love of Roy Hibbert, but West continues to be a steady force for Indiana. He put up 25 points on 11-of-17 shooting, on a night his teammates struggled to make shots.

X factor: The Pacers' third quarter. For the second straight game, Indiana struggled to get separation from one of the league's worst teams, but this time the third quarter worked in its favor. The Pacers outscored Utah 30-24, giving them the cushion they needed.

That was ... eerily evocative. Gordon Hayward -- who famously starred in this state in college -- was just long on a 3 at the buzzer, much like his most memorable miss at Butler, the half-court heave at the end of the national championship loss to Duke.

MVP: Russell Westbrook was ruthlessly efficient. In 25 minutes he scored 26 points, while shooting 10-of-12 from the field and 4-of-5 from downtown. He also packed one of the nastier jams in recent memory.

X factor: Believe it or not, Kevin Durant missed 14 straight shots from the field Sunday. Yet he still finished with a game-high 28 points, thanks to making all 12 of his free throw attempts.

Turning point: Charlotte ended the third quarter down just four points only to wilt in the fourth. In the final period the Thunder outscored the Bobcats 31-18.

Defining moment: The Magic dominated the Sixers in the fourth quarter, outscoring them 26-12 to win by a comfortable margin. The key was Orlando's second unit. It played with great energy and effort -- especially on defense.

That was ... Philadelphia's 14th straight loss: The losses keep on piling up for Philly, which raises the question. If the Sixers can't beat the Magic, whom can they beat? It makes you wonder if Philly is going to win another game this season.

MVP: Tony Parker. Returning to the lineup after several games off nursing a "variety of maladies," Parker paced the Spurs with 22 points on 10-of-15 shooting and seven assists, with just one turnover.

X factor: Free throw shooting. Not always one of San Antonio's strengths, the Spurs got to the charity stripe 28 times against the Mavericks, converting 24 of them. Dallas, meanwhile, managed to hit only nine free throws in 14 opportunities.

MVP: Though Goran Dragic earned "MVP" chants from Suns fans for the second game in a row, Gerald Green was the game's MVP. He finished with 33 points, 15 of which came from behind the arc, and finished off a close game with four big free throws.

X factor: Ish Smith is fighting for playing time that'll be scarce once Eric Bledsoe returns from his knee injury. His entrance coincided with an injection of tempo that turned the Suns' seven-point deficit into a 40-37 lead after the first quarter. Smith finished with 8 points, 7 dimes and 3 steals.

That was ... not defense: Phoenix led 79-65 at halftime thanks to 63 percent shooting and a 12-of-18 clip from 3-point range. But the Suns' problem was that an Atlanta team without Al Horford, Paul Millsap and Pero Antic was shooting 62.5 percent.

DeMar DeRozan, Raptors: Went 10-for-16 from the field en route to 32 points in a 104-98 win over the Warriors. DeRozan's third straight game over 30 points saw him net six assists and zero turnovers. Toronto, ready for a second Atlantic Division banner?

The Philadelphia 76ers: Guess it's too late to bring Allen Iverson back now that they've hoisted The Answer's number to the rafters. After losing 92-81 Sunday night to the hapless Magic, Philadelphia's losing streak hit 14 games. Time for practice?

It has started.. My oldest son asked me to work him out.. So I did tonite. Let's just say he's probably not my biggest fan right now..

"We're the hungriest team in the NBA. Everybody knows what this team is going through, playing without our best player. When our young boy comes back ... I want a ring. I want a ring so bad. When he comes back, I know our time will come." 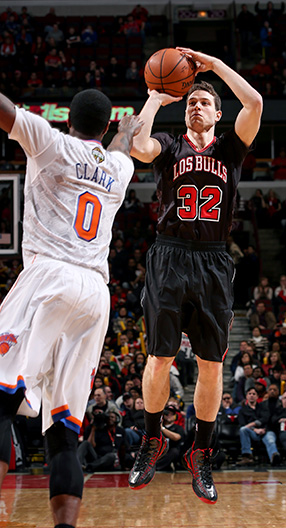 Gary Dineen/NBAE/Getty ImagesNew Bulls guard Jimmer Fredette checked in with 3:08 left after joining Chicago earlier in the day. The sharpshooting guard drilled a long jumper on his first shot, making it 107-83 over the Knicks with 2:16 remaining.

MVP: It wasn't Thanksgiving, but Joakim Noah carved the Knicks up like a roast turkey Sunday. The Bulls center recorded the fifth triple-double of his career, finishing with 13 points, 12 rebounds and a career-high 14 assists. Playing with a sprained right ankle, Noah recorded the most assists by a center since 1979.

That was ... so Knicks: From the jump, New York came out unprepared to play. The Bulls opened the first six minutes of the game with a 25-6 run over the hapless Knicks. The Bulls would go on to lead by 21 heading into the second quarter and score 37 points, the most points they've scored in any single quarter this season.