OAKLAND, Calif. -- Can it be a good sign when your star has a bad game? Yes, if your team still manages to have a great one.

In the past, when Stephen Curry took to the bench, he sat on a button that detonated the Warriors' offense. The dependence on his playmaking was acute at points, especially during the time Andre Iguodala missed with a hamstring injury. For much of the season, Curry served as the team's lone NBA-level ball handler. 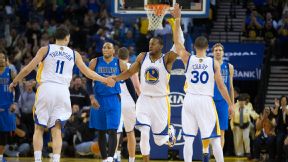 It's often taken for granted that NBA guards can dribble, but it's near impossible to run offense without guards who can. When Warriors general manager Bob Myers made a trade for Jordan Crawford, Golden State's offense was scoring a staggering 23.3 points (per 100 possessions) fewer during Curry's resting periods. Crawford's presence didn't wholly address the issue, so Golden State made another deal for Steve Blake, a capable point guard whose presence was wasted on a Laker team that has more need for losses than wins.

Ever so quietly, these moves dramatically altered a team that many had already written off as disappointing. Now armed with bench players who can dribble and pass, the Warriors no longer rely on their best player to a worrisome degree. They've won five in a row, with Curry averaging a mere 27.2 minutes per game over the stretch.

The end of total Curry dependence was well epitomized in a 108-85 thrashing of the visiting Dallas Mavericks on Tuesday night. Curry scored a scant 10 points on 12 shots, and the Warriors were better than fine, building on a first-half lead as Curry rested for most of the game.

"He's the maestro, and he's done a great job at orchestrating our offense," Warriors coach Mark Jackson said after the game. No, Jackson wasn't talking about his All-Star point guard. Instead, it was Blake getting the praise in the postgame news conference -- praise to which a bashful Blake said, "Hopefully, I can live up to it."

Blake has been a wildly popular addition in Oakland in a way that 8.6-point-per-game players seldom are. Some of that speaks to his pleasantly unselfish play and some of it speaks to the glaring void he patched up. Blake might merely be a "role player," but he's well-matched to this particular role. The bench was adrift offensively before his arrival.

Jordan Crawford hasn't found his way as quickly or easily as Blake has, but he was incandescent on Tuesday, scoring 19 points on shots that few NBA players dare take. There might be an inverse relationship between how open Crawford is and whether he hits the attempt, but Crawford's content to reduce that theory down to: "I just have confidence in myself, always did, and luckily, they goin' in."

Jackson is more declarative, saying, "We have a legitimate second unit with no weaknesses."

Perhaps "no weaknesses" is a bit much, but the Golden State bench has made a transition from weakness to strength. They were already a solidly built defensive unit before the trades, thanks to the stout play of Jermaine O'Neal and Draymond Green -- they were just sorely in need of some offense.

Much like his hitchy free throw form, O'Neal's career keeps going, long after you think it's about to wrap up. He's providing excellent rim protection for a guy who was drafted in 1996. He's often flanked by Green, the rare player who can competently guard Dirk Nowitzki and Monta Ellis in a single possession. The Warriors are gaining steam with their Crawford-Blake guard tandem, but it's Green and O'Neal who establish the second unit's defensive foundation.

And how does Curry feel about a transformation he's taking in as a spectator?

"Anytime you have a bench that can play the way they did tonight, that's huge. That's going to help us in the big picture, where we're trying to go. It's hard to prepare for us when you don't know who's going to have the big game," he said.

In the past, stopping Curry meant you almost certainly stopped the Warriors. The present is a little less predictable thanks to the presence of the newest Warriors. In "the big picture," Golden State is considered something less than contenders. That could change now that its starters finally have some support.

Ethan Sherwood Strauss is an NBA contributor to ESPN.com. Follow him, @sherwoodstrauss

MVP: Andrew Bogut set the tone for the Warriors with strong defense, solid shot-making and great rebounding. He led all Golden State starters with 30 minutes played, contributing 15 points and 10 rebounds

LVP: The entire Mavericks team. No rotation player shot better than 50 percent in a game that was all but over midway through the third period. The Warriors outscored Dallas every single quarter.

X factor: The Warriors' bench, led by 19 points from Jordan Crawford, scored 59 points and allowed the starters a chance to rest on the first night of a back-to-back.

MVP: When the Celtics brought the Pacers' lead down to one point at 77-76, it was David West who hit the important jumper. He scored a game-high 24 points in the low-scoring affair in Indiana.

X factor: Andrew Bynum entered the game in the first quarter to a nice ovation from the crowd. In his first game since December, he led all players in this contest with 10 rebounds. He added eight points, as well.

That was ... not a championship Pacers team: The Pacers led by as many as 15 points, but their struggles continued. They once again lost the third quarter and let the Celtics hang around in the game but pulled out the double-digit victory.

MVP: Josh Smith got hot after halftime. The Pistons forward scored nine of his 24 points in the third quarter. He also knocked down both of his two 3-pointers in the period after intermission.

LVP: After a 20-20 performance in Brooklyn, DeMarcus Cousins came down to earth in Detroit thanks in large part to Andre Drummond. The second-year big man played excellent defense against the Kings' starting center. In the loss, Cousins finished with a double-double, 13 points and 14 rebounds but shot an inefficient 5-of-15 from the field.

X factor: Led by Rodney Stuckey, the Pistons bench was a difference-maker in this one. Stuckey scored 23 of the Pistons' 38 bench points in the victory. Meanwhile, the Kings reserves combined to score just 22 points in defeat.

MVP: Besides anchoring the defense, Marc Gasol made hay on the offensive end with 19 points (on 8-of-14 shooting), nine rebounds and seven assists.

Turning point: After a solid push by Portland to end the third quarter, the Grizzlies opened the fourth on a 7-1 run, putting Memphis up 15. The Blazers never threatened after that.

That was ... a good defense limiting a good offense: Portland shot just 40 percent. Memphis, meanwhile, abused the Blazers inside, scoring 54 points in the paint to Portland's 34.

MVP: Kevin Durant earns this with his 11th 40-plus-points game of the season on just 22 shots, as well as the dagger to put OKC up 104-96 with less than a minute left. Houston just didn't have anyone who could stop him in the final minutes. (Though, does anyone?)

LVP: With no Kendrick Perkins, Dwight Howard should have a big game, right? Wrong. Howard was completely stymied in the post and also went 1-for-6 from the free throw line, his first game shooting sub-50 percent there since Feb. 20.

That was ... testy: Patrick Beverley and Westbrook confronted each other less than five minutes in. Then Harden and Reggie Jackson, and then Durant and Francisco Garcia. With Houston surging, could we be looking at another rivalry?

MVP: Tony Parker. The starters didn't have to play much in this one, as it was an absolute massacre early on. Parker outscored the Bulls by himself in the first quarter 16-14 on his way to 20 points and nine assists in just 24 minutes.

Defining moment: Tip-off. In all seriousness, this thing was over quickly, save for the Bulls' late run to make it respectable. The Spurs were up 38-14 after the first quarter and 61-33 at half, and not one starter played more than 28 minutes.

That was ... whoa. The Spurs took it straight to one of the best defenses in the league from the jump and managed to shoot 58 percent from the floor through the first three quarters before emptying the bench in the fourth.

MVP: Hard to ignore big nights by the Kevins (Love and Martin), but J.J. Barea had 19 points on nine shots and buoyed what's typically a shaky Minnesota bench unit.

LVP: Despite his decent line (4 points, 5 boards, 4 assists in 22 minutes), Giannis Antetokounmpo missed all five of his field goal attempts, turned it over twice and looked timid with the ball in his hands.

X factor: The Wolves' bench, among the worst in the league, was a net positive rather than a negative, helping them rebound from an early 11-point deficit.

Kevin Durant, Thunder: In between all the extracurricular activities punctuated by the Westbrook vs. Beverley powder keg, Durant dropped in 42 points in the 106-98 win over the Rockets. Durant sank 5 of 8 3-pointers as the Thunder bounced back from an embarrassing loss to the Lakers.

Shawn Marion, Mavs: The Matrix was 0-for-6 from the floor in a 108-85 loss to the Warriors. The Mavs are now just one game ahead of the Suns for the final spot in the West playoffs.

Fan yells Beverley's name, he hears it, turns around and looks and the fan is pointing his thumbs down. Beverley says, "thank you."

"Sometimes we kind of veer off, kind of get distracted a little bit."

-- Rockets guard James Harden, after a testy game with the Thunder, on changing course from doing what the Rockets do best. 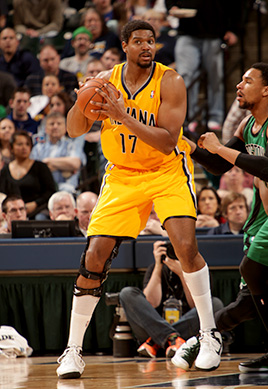 Ron Hoskins/NBAE/Getty ImagesAndrew Bynum made his debut with the Pacers in a win over the Celtics, finishing with eight points and 10 rebounds in his first action since late December.