What Clippers Gained On 11-Game Streak

DENVER -- It was bound to happen eventually.

The second game of a back-to-back, the high altitude, a tired, banged-up roster versus one that loves to run -- this was the perfect storm for the Clippers' winning streak to be snapped.

Yet while the streak is over, the lessons learned from it remain, and they'll serve a purpose come the postseason.

"We found ways to win with a lot of guys out," Clippers coach Doc Rivers said. "And you may have to have a playoff game like that. Overall, I was just happy how tough we were mentally."

This is the tale you'll hear from the Clippers insofar as how the streak has changed them. More than anything -- more than Blake Griffin's ascendance into true superstar, more than DeAndre Jordan's transformation into a composed defender -- the team's newfound mental resolve is the most valuable gift granted to them by the streak.

The Next Man Up mentality is one every head coach tries to instill in his or her team. No excuses no matter the injury, no matter the situation. After the streak, this psychology now pervades the Clippers' locker room. That the team won so many consecutive games while missing the likes of J.J. Redick and Jamal Crawford at times only further instilled this mindset.

"I haven't heard one guy complain, 'Oh, we don't have this guy or this guy,'" Griffin said. "It doesn't really matter. We honestly believe that every night we go out, we have a chance to win, no matter who's playing, and that's a big mental step for our team."

Griffin, dominant during this stretch, was nothing short of gassed Monday night. Weary, sapped of energy, Griffin and his shot looked flat, devoid of lift or strength. Though he did manage 26 points, he did so on 25 shots, all of them needing just a bit more effort than usually required.

A coach might frown at such a performance, preferring his star to defer to those whose shots are falling on that night. Rivers, however, wasn't bothered by Griffin's attempts.

"I told Blake I don't care," Rivers said of Griffin's shooting. "I don't mind if he goes 7-for-40. Just keep shooting with confidence."

Confidence is key with any player, especially one still extending his range. Griffin's shot may not have fallen Monday night at the rate it did the past 12 games, but as Rivers said, that's no reason to lose faith.

It all goes back to the mental fortitude Rivers has been able to inculcate in his team over the past 12 games -- not just a "no excuses" approach, but a "never say die" one as well.

It would have been easy for this team to expect to lose, knowing the perils of playing 5,280 feet above sea level. The Clippers could have played hard for a half, then checked out as they prepared for their brief break. And while they still lost, they never hung their heads or even thought of an early surrender. They carried on the good fight until the final buzzer.

A true title contender is a team that doesn't rest on its laurels. Never content with its current lot, the team always strives to improve in every area, from strategy to attitude. So while the wins are nice, and the boosts in confidence and seeding it provides certainly are boons, it doesn't mean the Clippers are done getting better.

"Streaks are great, but you could win 25 in a row and still be out in the first round of the playoffs," Griffin said. "We didn't even talk about the streak or think about it. It wasn't a big thing. The biggest thing is how we're playing, and I think it was a sign of maturity."

MVP: Second-year player Terrence Jones was unstoppable. With Dwight Howard missing his first game of the season due to a strained ankle, Jones dominated the court. He scored 30 points on 11-for-15 shooting from the field and 3-for-4 from behind the arc..

X factors: Omer Asik (arguably the best backup center in the league) got the start at center and played great defense. He got his first double-double since last April and played 28 minutes. Even though he missed multiple 2-foot shots, his presence solidified the middle for Houston.

That was ... not even close. After their first three-game losing streak (all against Western Conference contenders), Houston would not be denied at home against the worst team in the West. The Rockets led by eight after the first quarter, by 19 at the half, by 23 at the end of three and ended up winning by 38.

MVP: Dirk Nowitzki. On a night full of lackluster performances by players on both teams, Dirk was the best of the bunch. Nowitzki scored seven of his game-high 19 points in the fourth quarter, including a back-breaking 3-pointer with 1:32 remaining that gave the Mavs a five-point lead.

LVP: Jeff Green. The roller-coaster ride for Boston's inconsistent leading scorer continues. After scoring 39 points against New Orleans Sunday night, Green was brutal offensively against Dallas, missing 10 of his 12 shots from the field. The small forward tallied a mere five points and had a game-high six turnovers in 39 minutes of action.

MVP: Kevin Durant (35 points, 12 rebounds, 5 assists) is a scoring machine. He's now scored 25-plus points in 32 consecutive games. Michael Jordan is the only player in NBA history with a longer streak (40 straight in 1986-87).

X factor: Russell Westbrook quietly had a near triple-double (17 points, 9 rebounds, 9 assists). He and Durant ran pick-and-roll a few times in the fourth quarter, which led to wide-open dunks for KD. It was beautiful to watch.

Defining moment: After the Bulls cut the Thunder's lead to 76-75 early in the fourth quarter, OKC responded by going on a 16-1 run to put Chicago away. Still, it was an entertaining and hard-fought game between both teams.

MVP: Paul Millsap is the MVP tonight after reminding everybody that, when healthy, he's a legitimate All-Star player. Twenty-eight points on 20 shots, Millsap was dominant on the offensive end.

Defining moment: At the start of the third quarter Millsap let everybody know he was going to take over and nobody was going to stop him. Halfway through the quarter, the Hawks had gained control, and they never let go.

That was ... like a pendulum: The first half, the Bobcats had control of the game and looked like they were going to extend their eight-game home winning streak. Then, in the second half it swung completely the other way in the Hawks' favor.

MVP: Paul George might have gone only 4-for-14, but he hit 15 free throws, grabbed 24 points, had eight rebounds and viciously posterized Henry Sims for the late-game dagger. An absolutely incredible dunk.

That was ... miserable: The 76ers have lost 21 straight, a franchise record, and are 15-52, but even with only 15 games left, they could still theoretically make the playoffs. If there's anything that shows how weak the Eastern Conference is, it's that.

Defining moment: The 76ers fought extremely hard throughout the entire game and came within 88-85 with 2:30 left. Yet on the very next play, they left George Hill wide open for a momentum-changing 3.

MVP: Deron Williams played his best game of the season, an effort that featured multiple vintage ankle-breakers and his first dunk of the entire season. On top of these highlights, Williams canned 28 points on a ridiculous 11-for-13 shooting night and also coming away with three steals.

LVP: Miles Plumlee provided zero rim protection, barely playing in the second half because of his negative impact in the first. Plumlee was a minus-11 on the night, getting outplayed thoroughly by his brother Mason, who scored 14 points on 5-for-6 shooting.

X factor: Shaun Livingston wasn't the highest-scoring starter for Brooklyn but was a constant mismatch creator with Phoenix always playing a small lineup. S-Dot put Goran Dragic in foul trouble for the entire night and finished with 12 points, five assists, a steal and a block.

Deron Williams, Nets: Stop the presses, er ... publishing tool! Williams dunked for the first time this season. He scored 28 points, leading the Nets to a 108-95 victory over the Suns. Williams shot 11-of-13 from the field as his season-long ankle woes appear at an end.

Philadelphia 76ers: Twenty-one down, six to go? With the 76ers taking a 99-90 loss to the Pacers on Monday night -- their 21st straight -- the franchise record of 20 straight losses was broken. Next record in sight: The Cleveland Cavaliers set the NBA record for consecutive losses with 26 in the 2010-11 season.

DEN is the best team in the league at their bigs runnin straight to the rim and sealing in transition. extremely tough to defend

"He's the best player in the world right now." 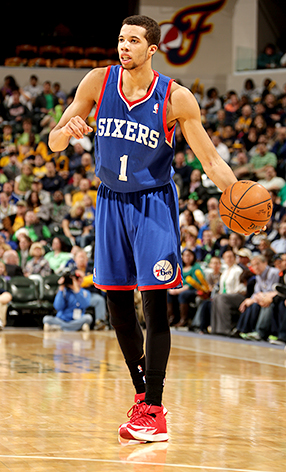 Ron Hoskins/Getty ImagesIn losing 99-90 to Indiana, Michael Carter-Williams and Philly eclipsed the Sixers' previous mark of 20 straight losses during the 1972-73 season, when they finished 9-73. Philly has tied the Pistons for the sixth-longest losing streak in NBA history.

In terms of streaks within a single season, Kevin Durant became only the fourth different player in NBA history to score 25-plus points in each of 32 consecutive games. Wilt Chamberlain had three such streaks (including a single-season record of 80 consecutive games of 25-plus points encompassing every game of his spectacular 1961-62 season); Oscar Robertson had a 46-game streak in the 1963-64 season; and Michael Jordan had a 40-game streak in the 1986-87 season.