1. Knicks' Postseason Hopes On The Brink

Carmelo Anthony said he still has "faith" that the Knicks can make the playoffs after a 106-100 loss to Cleveland at home.

Knicks fans, though, probably were using a different word to describe how they felt after watching their team suffer what could ultimately be a crippling loss to their thinning playoff hopes. 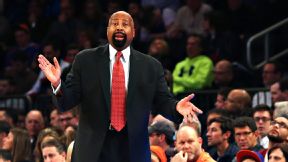 The Knicks' eight-game winning streak is history and so may be their slim playoff hopes after dropping what simply is an inexcusable loss.

The Knicks' season had seemingly flatlined a couple of weeks ago after a seven-game losing streak, and somehow they came back and pumped new life into their playoff hopes with a winning streak that came out of nowhere.

All they had to do was beat a Cavs team that was going through the motions without Kyrie Irving at home and they would head out West to face the struggling Lakers in front of new team president Phil Jackson with a nine-game winning streak. The Knicks could practically taste a double-digit winning streak.

The Hawks (31-37) lost earlier in the day and have been trying to give the eighth spot away to the Knicks. But New York (29-41) could not hold on to a 17-point second-quarter lead. Jarrett Jack transformed into Allen Iverson and exploded for 23 of his 31 points after halftime. Jack buried 10 of 13 shots in the second half and may have sunk the Knicks' postseason dreams in the process.

And the Knicks have nobody to blame but themselves. They defended the pick-and-roll like it was some offensive wrinkle they had never seen before. And offensively they were even harder to watch as New York self-destructed by taking predictable and challenged isolation shots. Each offensive possession was painful and the Knicks got nothing easy down the stretch as they missed 12 of 14 shots after leading 90-85 with nine minutes left.

All this against a Cavaliers team that had lost eight of its previous 10 coming in.

"It's a tough loss," Stoudemire said. "You don't want to lose a game like this, especially against a team that's not really making a push to the playoffs. They're just being spoilers right now."

The Knicks have 12 games remaining, starting with a five-game West Coast swing against the Lakers, Kings, Suns, Warriors and Jazz. Had they beaten Cleveland, the Knicks probably would have been able to drop one or two of the upcoming road games.

This loss slices into any slim margin for error they had to begin with. The Knicks may have to go 4-1 on this trip to have a chance. Atlanta's next five games are against the Suns, Wolves, Blazers, Wizards and Sixers.

Once the Knicks return from their West Coast jaunt, they play their final seven games all against Eastern Conference opponents that are in the thick of the playoff race. The Knicks face Brooklyn twice, Toronto twice, Washington, Miami and Chicago. With exception to the Heat, all those teams will likely still be jockeying for playoff positioning in April.

Sunday was likely New York's last "easy" game of the season considering its opponent and being at home, and the Knicks blew it.

Before this crushing loss, Mike Woodson tried to estimate what number the Knicks need to sneak into the postseason.

Woodson initially guessed "38 to 40" wins before altering it to "anywhere from 35 to 40 will probably be the number that gets you in."

The Hawks only need four more victories to reach 35. In order to reach 37 wins, the Knicks have to go 8-4 in their final 12.

It's a tall task but possible. I've maintained that I still can't see a Melo-led team failing to make the playoffs in this awful Eastern Conference. Something still tells me that the Hawks will keep the Knicks in the thick of it perhaps until the final week.

"I got faith that we can make a run," Anthony said.

Time is running out, though, for Melo and the Knicks. And so is the faint faith in a playoff berth after Sunday's unacceptable loss.

ESPN Staff Writer
Ohm Youngmisuk has covered the Giants, Jets and the NFL since 2006. Prior to that, he covered the Nets, Knicks and the NBA for nearly a decade. He joined ESPNNewYork.com after working at the New York Daily News for almost 12 years and is a graduate of Michigan State University.
Follow him on Twitter »  Ohm's chat archive »

MVP: As Pau Gasol sat out the second half with flu-like symptoms, Jordan Hill scored a career-high 28 points and grabbed 12 boards, dominating Orlando's front line in the paint and scoring on a variety of back-to-the-basket moves. He also sported an impressive pile of hair.

X factor: Nick Young scored 26 points on 8-for-17 shooting off the bench, including a 3-pointer from a different zip code with just over three minutes remaining. That trey gave the Lakers a seven-point lead, and the Magic would never get closer than six the rest of the way.

That was ... a failure in tanking: Laker fans may find tonight's victory -- the team's first in five tries -- tough to stomach. The win vaulted the Lakers from fourth-worst to sixth-worst in the NBA.

MVP: Kenneth Faried has been on a tear this entire month and his 20-point, eight-rebound, three-block performance against the Wizards was no different. A skying block of a John Wall layup, followed immediately by a salute to the crowd, capped off his impressive night.

X factor: Coming into the season having just taken five 3-pointers, Darrell Arthur went 3 for 4 from downtown, responding to the coaching staff encouraging him to stretch out his range. His 3-point shooting kept him on the court and allowed his more lauded defense to impact the game.

Defining moment: 6-11 Marcin Gortat had his layup altered at the rim on an energetic block by the much smaller Randy Foye. The Wizards had the Nuggets in the position they wanted them to be in all game, but just couldn't keep up with their extra burst of effort right at the end.

LVP: After a season in which he's defied Father Time, Dirk Nowitzki was awful against Brooklyn, hitting only 2-of-12 from the floor. Though he finished with 10 points and eight rebounds, his repeated misses from his sweet spots hurt Dallas down the stretch.

X factor: Marcus Thornton provided a much-needed spark off the bench against Dallas, scoring 20 points and grabbing seven rebounds. His points came in bunches at the start of the second and fourth quarters, right when it seemed like Dallas was poised to take commanding leads.

MVP: Markieff Morris. In a game that was largely dominated by Minnesota, Morris provided the Suns with some consistent offensive output to keep them in the game. He was an extremely efficient 10-for-13 from the field, and also snagged eight rebounds to help the Suns complete the comeback.

X factor: Kevin Love. Even though the Timberwolves fell short, Love's production cannot go unnoticed. Love was all over the floor, and did it all for the Wolves. He was only a single assist shy of a triple-double and finished with 36 points and 14 rebounds. Minnesota couldn't hold up down the stretch, but not because of Love, who did about all he could.

That was ... gutsy: The Suns, who were down most of the game, showed a lot of fight in this one. Until their late lead, the Suns weren't ahead since the score stood at 9-6, and the game was largely controlled by Minnesota. Phoenix kept itself in it, however, and used a late surge to get the win.

MVP: Kyle Lowry took over in the fourth quarter and was not going to be stopped. Lowry had 25 points including a crucial steal at the end of the game to seal it.

Defining moment: While Lowry had a steal to seal the win for the Raptors, I'm going to go with the corner 3 in the final seconds to put the Raptors up 10. It put the cap on a masterful performance.

That was ... matinee: In typical matinee fashion this game took awhile to get going. A lot of sluggishness throughout, this one was difficult to watch through the first three quarters.

MVP: Isaiah Thomas found the perfect balance between scoring and playmaking Sunday. The Kings' point guard finished with 30 points, eight assists and three turnovers. Half of Thomas' assists came in the opening period during which the Kings scored 39 points.

X factor: Since the All-Star break, the Kings have had trouble moving and taking care of the ball. Coming into today's game, Sacramento had posted an assist-to turnover ratio of 17.3 to 17.9. Against Milwaukee on Sunday, the Kings played a solid game, recording 19 assists to just 12 turnovers in the victory.

That was ... a walloping. The Kings never let the Bucks see the light of day in this matinee matchup. Sacramento dropped nearly 40 points in the opening period, outscoring the Bucks 39-16 in the first quarter. The Kings also set a record for most points in a half this season with 70 before halftime of today's game.

MVP: This was the Jarrett Jack that Cavs fans have been longing for. Jack was hot in the first half and completely en fuego in the second. He finished 13-of-19 from the field for 31 points, including the dagger in the final minute. He had 10 assists, filling in admirably for the injured Kyrie Irving.

LVP: Whoever gave the Knicks' halftime speech. The Knicks came out of the locker room feeling pretty good about their 15-point edge. Their offensive execution from that point on was abysmal -- a maddening parade of lazy, out-of-rhythm jumpers. The only reason they didn't cough up the lead earlier was some residual heat from behind the 3-point line.

That was ... a devastating blow to the Knicks' playoff hopes: When you're up 17 on the struggling Cavaliers, who are missing Irving, you have to seal the deal. The Knicks didn't and their playoff hopes as calculated by Hollinger's Playoff Odds now rest at just 12.6 percent.

Jarrett Jack, Cavs: With Kyrie Irving out, Jack stepped up. He scored 23 of his 31 points in the second half as the Cavs beat the Knicks 106-100. Jack, who sank 13 of 19 shots, finished with 10 assists as Cleveland snapped a four-game losing streak.

New York Knicks: Just when it looked like the Knicks had closed the gap for the final East playoff spot, they let a 17-point lead slip away at home to a Cavs team that was without Kyrie Irving. Carmelo Anthony went cold late, missing 11 of his last 13 shots and all five in the fourth quarter. The Knicks are now three games behind the Hawks with 12 games to play.

A Big happy 30th chrisbosh...yeaaaaa homie you finally in the dirty 30 club...Welcome its amazing... http://t.co/QyKj4e93Qd

-- Mavs owner Mark Cuban, declaring that the NFL could be headed for a decline through overexposure. 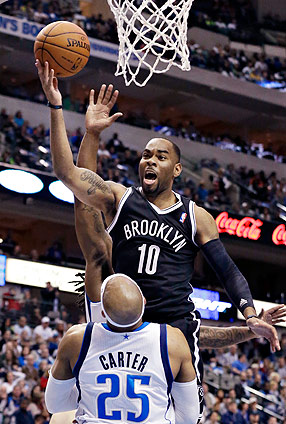 AP Photo/LM OteroMarcus Thornton had 11 of his 20 points in the fourth quarter for the Nets, who won their fourth straight game and beat a West team (Dallas) for the fifth straight time. The Nets are 11-3 with Thornton in the lineup after his acquisition from Sacramento.

Phoenix beat Minnesota 127-120. It was Minnesota's 23rd loss in a game in which Kevin Love scored at least 30 points and grabbed 10 or more rebounds. Only one player has suffered even half as many such losses during Love's six seasons in the NBA: Blake Griffin (13).