OKLAHOMA CITY -- The one benefit of this diminished-drama second round was that it also reduced the time spent discussing the officiating. Game 5 of the Western Conference semifinals brought it all back, with a frantic finish, controversial calls and an unforgettable 105-104 victory for the Oklahoma City Thunder over the Los Angeles Clippers.

After the Clippers came back from a 16-point fourth-quarter deficit to snatch Game 4, they repaid the Thunder by coughing up a late lead to give Oklahoma City a chance to close out the series in Game 6. It led to a lot of pounding in the interview room, from Doc Rivers hitting the table to show his anger at losing out on a crucial replay review to Chris Paul banging on the door on his way out after explaining his disastrous finish to the game.

It could end up being a pivotal moment not just in this series, but in the way we view the stars at the center of this series. The Thunder's Kevin Durant escaped trial by fire for a miserable shooting night thanks to the relentless Russell Westbrook. Paul might have cost himself the chance to get to his first Western Conference finals. 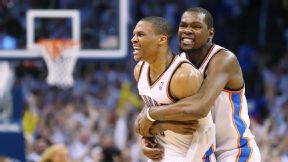 With so many candid and descriptive assessments of this meltdown/miracle, let's go to an instant oral history:

SCOTT BROOKS, Oklahoma City Thunder coach: "What a basketball game. One of the things I tell our guys is, 'Never, never put your head down. Keep playing until the last second.'"

DURANT (27 points, 10 rebounds, five assists): "We were down 13 with [four] minutes to go. Everybody was getting up and walking out."

The Thunder cut the deficit to five points in less than three minutes.

DOC RIVERS, Clippers coach: "We stopped playing with three minutes left. We were milking the clock."

Paul's jumper put the Clippers up by seven points with 49.2 seconds remaining. But after the Thunder called timeout, they quickly got the ball to Durant for a catch-and-shoot 3-pointer.

RIVERS: "We come out of a timeout, we're supposed to foul before they took the 3. We made a comedy of errors."

Crawford missed a layup, Russell Westbrook grabbed the rebound and whipped a pass ahead to Durant, who drove in for a layup that cut the Clippers' lead to two. After missing 14 of his first 20 shots, Durant made his final two in the last minute.

DURANT: "I was missing some shots that I felt good about. But that's how the game goes sometimes. I just try to stick with it and come through for my team. And I was able to hit some shots. But Russell carried us the whole game and definitely put me in position to go out there and hit those shots and put us in a position to win the basketball game."

WESTBROOK (38 points, six assists): "Kevin always comes to me and tells me to stay aggressive regardless of what's going on."

That applied defensively as well. The shot clock was turned off with 17.8 seconds left in the game after Durant's layup. The Clippers simply needed to hold onto the ball and wait for the Thunder to foul them. But as Paul dribbled down the right sideline, Westbrook pursued him and knocked away the ball, which was picked up by Reggie Jackson.

RIVERS: "[Paul] just said he was anticipating a foul. I'm not sure what he was doing. That's a tough turnover for Chris. Obviously, he's better than that and he doesn't usually make turnovers like that."

Jackson grabbed the ball near half court and dribbled to the basket. That's when the most disputed play of the game took place. As Jackson went up with both hands, Matt Barnes hit his left arm, and Jackson lost control of the ball. Replays appeared to show his right hand was the last to make contact with the ball before it went out of bounds with 11.6 seconds remaining. The officials called Thunder ball, then went to the replay monitors to review.

TONY BROTHERS, NBA officiating crew chief (to a pool reporter): "When the ball goes out of bounds, the ball was awarded to Oklahoma City. We go review the play. We saw two replays. The two replays we saw were from the overhead camera showing down, and the one from under the basket showing the same angle but from a different view. And from those two replays, it was inconclusive as to who the ball went out of bounds off of. When it's inconclusive, we have to go with the call that was on the floor."

"In my opinion, let's take away replay. Let's take away the replay system. Because that's our ball, we win the game. And we got robbed, because of that call. And it's clear, everybody in the arena saw it. That's our ball. Whether it was a foul or not -- it was -- but they didn't call it. The same thing happened to us in the Golden State series, where they tried to reverse the call. They didn't even want to look at the replay, because they knew it was a foul, but then they had to look at the replay, and they had to go by what it said. And they gave Golden State the ball. And they later came out and said, 'It should have been a foul on the call.'"

ROD THORN, NBA president, basketball operations (in a statement issued the day after the Warriors beat the Clippers in Game 1): "After reviewing postgame video, we have concluded that the instant replay review of the out-of-bounds call with 18.9 seconds remaining in the game involving the Clippers' Chris Paul and the Warriors' Draymond Green was administered correctly by the referees and the correct decision was made in awarding the ball to the Warriors. Under the existing rule, referees may only use instant replay to determine which player caused the ball to go out and a limited set of other reviewable matters. ... Just prior to the ball going out-of-bounds, Paul was fouled by Green and Paul should have been granted two free throws. Contact preceding out-of-bounds calls is not a reviewable matter."

RIVERS: "I don't need [a memo for the latest call]. I'll release the memo: They blew the call. That's the memo."

RIVERS: "We've got two more games to play. But that could be a series-defining call. And that's not right. [Pounds fist on table for emphasis on each of the final seven words]."

The Thunder inbounded and got the ball to Westbrook, who pulled up for a 3-pointer ... and drew a questionable foul call on Paul.

CHRIS PAUL: "You can't foul the 3-point shooter. That's the dumbest thing ever. Even if I didn't foul him."

Westbrook made all three free throws to give the Thunder the lead. The Clippers had one last possession with 6.4 seconds left. Paul came down the right side and lost control of the ball as Jackson hit his right arm while Paul tried to pass to a heavily guarded Blake Griffin. Paul's feeble statistics in the final 14 seconds: two turnovers, one foul.

PAUL: "This one's bad. We shouldn't have been in that situation. That's on me."

RIVERS: "We made a lot of mistakes. The one thing I know about our officials, they don't do anything on purpose, they don't cheat or anything like that. They made a horrendous call. But at the end of the day, we created the situation. We put them in the situation by the turnovers, the bad fouls, the non-fouls. We did a lot ourselves to not win the game."

MVP: Russell Westbrook scored 23 of his 38 points in the second half, including the go-ahead free throws with less than 7 seconds left. On a night when Kevin Durant couldn't find his shot (6-of-22 FGs), his much-maligned sidekick willed his way to the rim and put his team on his back.

Defining moment: Which one? There were several controversial plays in the final 11 seconds alone. Reggie Jackson losing the ball out of bounds and OKC getting the ball back sticks out, but Chris Paul's phantom foul on Westbrook's 3-pointer and the non-call on the final play also were contentious.

X factor: Fouls. The Clippers committed 28 of them, compared to just 21 by the Thunder. That led to a big disparity in free throw attempts (36 for OKC, 20 for L.A.), which kept the Thunder in the game despite shooting so poorly (42.9 percent). The Clippers need to do a better job of corralling the Thunder's pick-and-roll attack and limiting penetration.

MVP: Marcin Gortat, who had 31 points on 13-for-15 shooting from the field. Gortat also had 16 rebounds and he was actually outrebounding the Pacers 16-15 when he exited the game in the fourth quarter.

X factor: The rebounding advantage for the Wizards cannot be understated. The Wizards won the battle on the glass 62-23. This includes 18 offensive rebounds by the Wizards, which nearly matched Indiana's total.

Defining moment: The Pacers were plus-42 in third quarters of the first four games of this series, but Washington turned the tables in this game. The Wizards outscored Indiana 31-14 in the third, largely powered by John Wall's 17 points in the quarter.

Marcin Gortat, Wizards: Gortat delivered crushing blows worthy of his dad, Janusz Gortat, who collected his last Olympic boxing medal for Poland in 1976. Gortat went 13-of-15 from the floor en route to 31 points and 16 rebounds as the Wiz routed Indy 102-79. 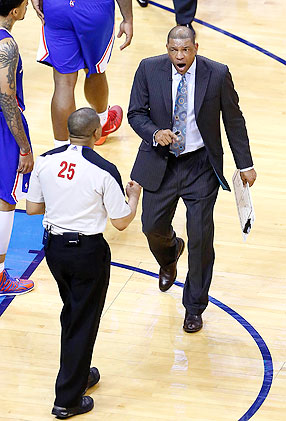 Alonzo Adams/USA TODAY SportsClippers coach Doc Rivers knows any small thing can swing the series, which is one reason he took exception to a late reviewed call not going his team's way.

After blowing a 16-point fourth-quarter lead in their Game 4 loss, the Oklahoma City Thunder overcame a 13-point fourth quarter deficit to defeat the Los Angeles Clippers and take a 3-2 lead in their best-of-seven series on Tuesday. It is the first time that each team won a game after trailing by 13 or more points in the fourth quarter in a single playoff series since Dallas and San Antonio both did it during their Western Conference finals matchup in 2003 (Dallas won Game 1 in that fashion and San Antonio returned the favor in Game 6).

How rare is it for a team to relinquish a 13-point fourth-quarter lead? Prior to the date of the Clippers' fourth-quarter comeback in Game 4, 459 teams had held a 13-point fourth quarter lead over the past 10 playoff seasons combined (since 2005). Of those teams, 445 went on to win the game (96.9 percent), but it has now happened in consecutive games in the Clippers-Thunder series.