He'd just collected his 16th rebound -- only the second-most impressive number on a stat line that included 39 points, five assists and two blocked shots -- and he gave a quick fist pump as the clock expired and the scoreboard read 104-98 in his team's favor. Durant was the main reason the Oklahoma City Thunder defeated the Los Angeles Clippers in Game 6 and thus this second-round series. With the NBA's Most Valuable Player award already in his possession, it could hardly be considered a statement performance. The polls had long ago closed, and the debate had been settled long before that.

Besides, there has already been enough talk.

Through two rounds, the most notable aspects of the Thunder's and Clippers' postseasons had been words.

Donald Sterling's voice on a recorded conversation, making despicable comment after despicable comment. Doc Rivers' stabilizing, reassuring tone in the aftermath. The Oklahoman tagging Kevin Durant as "Mr. Unreliable." Durant remaining classy throughout, culminating in his MVP acceptance speech. Shelly Sterling piping up, followed by Donald Sterling's shoveling-even-deeper interview on CNN. In the aftermath of the Clippers' collapse in Game 5, Doc Rivers went on a diatribe about the officiating that wound up drawing a $25,000 fine from the NBA. Chris Paul made a sorrowful confession to his mistakes that cost the Clippers their game and in their hearts what they knew was their best shot at the series.

Richard Mackson/USA TODAY SportsKevin Durant and the Thunder sent the Clippers to an offseason of off-court questions.

The Clippers faced elimination in Game 6 at home Thursday night, and that's when it was time to halt the steady stream of dialogue. It was time for action. There's not much left to discuss by the time close-out games arrive. That's why you have events like that no-question, no-statement pregame news conference with Miami coach Erik Spoelstra right before the Heat finished off the Brooklyn Nets. All the adjustments and counter-adjustments have been made this late in the series. The Thunder didn't even bother to write any tactical talking points on the whiteboard in the visitors locker room.

Game 5 of this series warranted an instant oral history. Game 6 gets the opposite treatment, a quote-free account.

There's nothing left for the participants to say.

Scott Brooks even went into mime mode when asked about Serge Ibaka's injured left calf that sent him out of the game for good in the second half: two palms turned upward and a head cocked to the side. That was about the extent of the information divulged; Ibaka will be examined further Friday.

In Ibaka's case, the Thunder's ally is the schedule: Their Western Conference finals series against the San Antonio Spurs doesn't start until Monday.

The response to watch early in this game was how Paul would come back from his Game 5 finish that included two turnovers and the foul that led to Russell Westbrook's winning free throws.

Paul showed right away that he wasn't going to try to win Game 6 on his own.

The first time he got the ball, he gave it to Blake Griffin to bring upcourt. Griffin passed to Paul. Paul gave it back to Griffin. Griffin returned it, then Paul delivered one more pass to Griffin off a pick-and-roll for a dunk.

It set the tone for a first quarter of ball sharing (11 assists) and balanced scoring (five players with at least five points). They led 30-16 after one frame and went ahead by 16 early in the second quarter.

If there's one thing we've learned in this series, it's that leads don't last. Durant began hitting shots, and the Thunder started chipping away en route to a 27-point swing by late in the fourth quarter.

There were back-to-back charging calls that made the Clippers and their fans irate but didn't prompt another postgame rant from Rivers. The Thunder wound up taking 33 free throws to the Clippers' 20 (Paul did note that the Clippers' total was two fewer than Durant and Russell Westbrook's free throw tally), but the Clippers shot only 60 percent from the line anyway.

Durant kept coming for them. He scored 14 points in the third quarter and 11 more in the fourth. And Nick Collison, whose quotability has made him a greater asset to the media than the rest of his team of late, provided solid relief of Ibaka with some smart passes and a big 3-pointer that tied the score at the end of the third quarter. (It also tied the total number of 3-pointers he made in the first nine seasons of his 10-year career). When even Collison is making bigger statements with his play than his mouth, you know it's a night of action over words.

For the Clippers, Rivers' weary sigh as he slumped into his seat for the postgame news conference summarized the way he felt -- not just about the outcome of the series but about the entire three-week odyssey since the Sterling conversation hit TMZ. His red, glistening eyes told the story of the emotional gathering in the Clippers' locker room after the game.

His greatest lament was that just as he felt the Clippers had finally embraced every concept he wanted them to, the season came to a finish. Paul and Griffin made similar remarks even though both were reticent.

The first question came in and Paul looked at Griffin, who looked back at him before addressing the disappointment they all felt. Griffin answered some questions with his hand over his mouth, lips barely moving, eyes not looking past the end of the table. This combination is still one of potential more than achievement; in their years together they have yet to make it out of the second round of the playoffs. Paul spoke of his desire for a championship, not merely reaching the conference finals, but he hasn't taken that interim step after nine years in the league.

They discounted the impact the Sterling story had on their performance -- and for the most part it wasn't evident in their play in the series. But perhaps the cumulative effect did catch up with them in the fourth quarter, when they had 12 minutes to save their season and couldn't respond to the challenge.

It might not have mattered anyway -- a Game 7 would have been looming in Oklahoma City this weekend. But now the Sterlings -- and their pledges to fight the NBA's intent to extract the team from them -- become the entire story, not merely a distraction to the players.

There won't be wholesale roster changes made this summer. Rivers said he intends to abide by the remaining two years on his contract, and the Clippers have up to 11 players under contract for 2014-15 if all options are exercised.

Rivers said that the he thought this season's team could win a championship, but the Thunder told them otherwise.

The Thunder told them by outrebounding the Clippers in four of the six games.

By finding that one additional contributor when they had to.

By having a one-two combination in Durant and Westbrook that delivered more punches.

And finally by having the league's most valuable player live up to the billing.

The lessons in this series weren't from the speeches, they were from the performances. Westbrook's relentlessness won't soon be forgotten. Neither should the Clippers' worthy efforts under the strain of an unparalleled situation. Durant said he took his hat off to Clippers -- although he didn't actually remove his red cap.

It was the one and only time during this series that words would have to suffice.

MVP: It took Kevin Durant nearly nine minutes to make his first shot, but in the second half, all bets were off. The league MVP finished the game with 39 points on 23 shots and grabbed 16 rebounds. He was unstoppable down the stretch and made all 10 of his free throws.

That was ... unfortunate: When Chris Paul was called for a questionable offensive foul late in the game, an understandably agitated Staples Center crowd responded by throwing drinks at the referees.

X factor: Scott Brooks opened the second half with center Steven Adams on the court instead of usual starter Kendrick Perkins. The rookie was huge throughout the contest, tallying 10 points and 11 rebounds in 40 big minutes of action.

MVP: David West was the consistent force throughout Game 6 for the Pacers. West tallied a game-high 29 points, adding six rebounds and four assists to his strong effort.

LVP: The starting Washington backcourt did not have a repeat of its great Game 5 performance. John Wall and Bradley Beal combined for just 28 points on 36 attempts from the floor after combining for 45 points in Game 5.

That was ... what we've been waiting for: Indiana has given us a lot to talk about during the playoffs with its struggles. Despite all of that, we have the matchup we've been talking about all season: Miami and Indiana in the Eastern Conference finals.

Kevin Durant, Thunder: After struggling out of the gate in Game 6, Durant turned it up in the second half to push OKC to the West finals. The MVP notched 39 points and 16 rebounds in the Thunder's series clincher.

Matt Barnes, Clippers: Barnes contributed just nine points on 4-of-14 shooting in a game-high 42 minutes of the Clippers' Game 6 loss. Barnes connected on one of his six 3-point attempts.

"Nobody expected us to be here. I think a lot of teams respect us now. We definitely made Indiana earn it."

-- Wizards PG John Wall, on the Wizards taking the Pacers to six games. 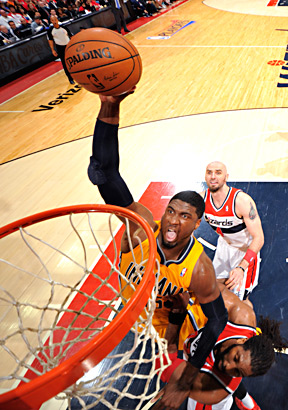 Jesse D. Garrabrant/NBAE/Getty ImagesRoy Hibbert rose up to deliver at the rim as the Pacers delivered a Game 6 win to reach the Eastern Conference finals.

The Thunder, who will meet the Spurs in the Western Conference finals, swept San Antonio 4-0 in the regular season.

There have been only three instances in NBA history in which one team was 4-0 or better against another team in the regular season and they met in the conference finals. In all three cases, the team that swept the regular-season series won the playoff series as well.