SAN ANTONIO -- We've been suckered by the San Antonio Spurs. We spend so much time hammering on the "Team, team, team" concept that they preach that we forget they can present some hellacious individual matchups.

The Oklahoma City Thunder learned the hard way how tough it can be to guard the Spurs one-on-one, especially without the injured Serge Ibaka to provide a secondary and final line of defense. The Spurs cracked the Thunder open with post-ups and dribble-penetration, in addition to great ball movement. They were an offensive juggernaut, easily taking the first game of the Western Conference finals, 122-105.

Even on a night in which they had a robust 28 assists, that still left 22 individually produced baskets for them. And some of the assists came because the ball handler beat his man and drew help defenders to create an easy scoring opportunity for someone else. 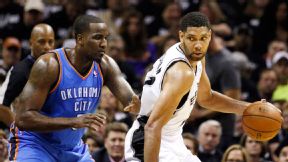 Soobum Im/USA TODAY SportsCovering Tim Duncan in the paint proved to be the first matchup issue OKC saw in Game 1.

It started with Tim Duncan, taking Kendrick Perkins off the dribble or overpowering the skinnier Kevin Durant, who was forced to guard him when the Thunder went with smaller lineups. Duncan scored 12 of his 27 points in the first quarter, and the Spurs were on their way to a 67-point half.

Duncan was easier to account for in the past because you knew exactly where he'd be: on the left block, maybe drifting out to where the Spurs' logo is on the court.

"He used to always make the ones from the 45-degree angle off the backboard," Thunder coach Scott Brooks said. "But now he can make them all over the floor."

That threat helped him get into the lane repeatedly Monday night, with all but one of Duncan's 11 baskets coming inside the paint. It led to a crushing 66-32 advantage for the Spurs in points in the paint, the stat that told the story of this game and screamed about Ibaka's absence. (The Thunder allowed 40 points in the paint per game during the regular season.)

It didn't stop there. Tony Parker can get to the hoop just as effectively as Russell Westbrook, even if he doesn't finish as dramatically. It's hard enough for Westbrook to stay in front of him; anyone else gets switched on Parker, and it's a wrap. Parker scored 14 points and had 12 assists.

Manu Ginobili can drive past guards like Reggie Jackson or sidestep big men such as Perkins or Steven Adams who switch on him or try to stay around on the pick-and-roll. And after he's Euro-stepped his way to the hoop a couple of times and gets his confidence going, he can be money from long distance as well. He scored 18 points in 27 minutes.

All that came before the Spurs got to Boris Diaw, who never quite fits the positions he's asked to play, yet makes that more of a problem for the opposition than the Spurs. Ginobili sent out the warning after shootaround, saying the Thunder "can't play small ball, because Boris is punishing them on the post." And sure enough, when the Thunder had Durant, Westbrook, Jackson, Caron Butler and Derek Fisher on the floor in the fourth, Diaw posted up Butler for two inside baskets in less than a minute.

Spurs coach Gregg Popovich said beforehand that even though the Spurs hadn't seen much of Oklahoma City without Ibaka they wouldn't be unprepared for the new look, and it wouldn't alter their approach. "At this point you are what you are," he said.

Players insisted that during the huddles he stayed on them to keep attacking and maintain the pace. He didn't specifically direct them to get the ball inside. All those points in the paint came in the context of their offense.

After the game, Popovich said: "You can't really change your stripes."

Which means the Spurs have been using those stripes as camouflage, like a tiger hiding in the tall grass. They're a collection of tough individual matchups cloaked in team ball. When the Thunder went small, Popovich didn't try to send in size to exploit the advantage because he had groups of players who could handle that regardless of their height, like Ginobili, Diaw, Parker, Danny Green and Kawhi Leonard. Think about it: The Spurs preserved their double-digit lead in the fourth quarter with a hot-shooting Duncan sitting for the first seven minutes.

"They have five guys that can score on the floor at the same time," Brooks said. "You don't have a possession off. Not one. We can't hide anybody."

There's nowhere to hide when a team throws so many troublesome matchups at you.

MVP: Danny Green was 4-for-5 from the arc and Kawhi Leonard scored on a bevy of impressive plays at the hoop, but it was Tim Duncan's 21 throwback points in the first half that set the tone for the game and established a lead the Thunder could only barely overcome before falling behind for good.

Defining moment: For all their first-half dominance, the Spurs faltered in the third quarter, eventually surrendering the lead with 5:09 left in the period. But halfway through the fourth, the Thunder ran out of gas. In a span of less than four minutes (from 5:56 to 2:15 remaining), the Spurs pushed their lead from 10 to 21. In came the bench and out went OKC's chances.

X factor: For the Spurs, it wasn't rocket science. With Serge Ibaka out, San Antonio took what Oklahoma City gave it: the paint. The Spurs notched 40 points in the paint in just the first half against a Thunder team that allowed an average of 39.4 points in the paint per game in the regular season. They finished with 66 to OKC's 32.

Tim Duncan, Spurs: Duncan set the tone early with 12 first-quarter points, sending the Spurs to a 122-105 win over the Thunder in Game 1 of the West finals. Duncan finished with 27 points and made the Thunder miss Serge Ibaka almost immediately.

Thunder starters not named Westbrook or Durant: So much for making up for the loss of Serge Ibaka. The trio of Nick Collison, Kendrick Perkins and Thabo Sefolosha combined for five points in the loss to San Antonio. Even Tiago Splitter outscored the trio.

So that they can explain it to their kids RT @mdotbrown: If I ever have kids, I hope I can explain to them why the Spurs won't go away.

"He's not coming through those doors."

-- Thunder coach Scott Brooks, on whether Serge Ibaka will return this series 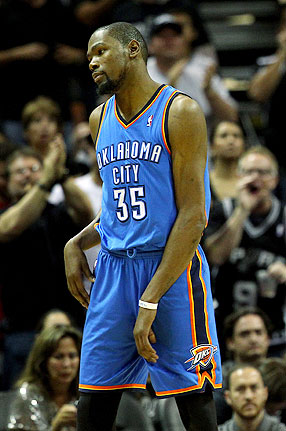 Ronald Martinez/Getty ImagesBefore the Spurs took charge, Kevin Durant and the Thunder had a 78-77 lead with 4:43 left in the third quarter.

The Spurs have won nine straight Game 1s, the fifth longest streak in NBA history and longest since the Bulls tied the Celtics' record by winning 11 straight spanning 1996-98.