Analysis: Perhaps the least known team of all, it has the best chance to become the Cinderella of this tournament.

After clinching the sixth position in Eurobasket, the qualifying tournament for this World Cup, Croatia returns to this tournament after a 12-year absence.

Vrankovic has summoned a group of young players that makes us think he will be using this event as a springboard to prepare for London 2012.

However, it would be difficult for Croatia to reach the second round because of the multiple injuries that have deprived it of having main player Stanko Barac on the floor. The bulk of the work will fall upon center Ante Tomic and Bilbao forward Marko Banic.

The glorious days of Toni Kukoc and the late Drazen Petrovic have been left behind. But Croatia's future looks bright, especially with the development of players from the U-19 team that came in third at last year's world championships.

As we've noted previously, in the NBA era, when Team USA has brought so few players with established All-Star credentials and big-game experience, they have struggled. Beyond that, trying to establish team cohesion in a matter of weeks is a major disadvantage compared to teams like Spain, Argentina and Greece, who have all played together for years.

That said, after some seriously sloppy performances in their first outings, Team USA is starting to come together, with a tough road win over Spain in Madrid followed by Wednesday's blowout over Greece in Athens.

As of now, the U.S. and Spain seem on a collision course for a rematch of their epic 2008 Olympic final -- a semifinal matchup on Sat., Sept. 11 in Istanbul between two closely-matched teams which ultimately decides the gold-medal winner seems like a good bet.

While Team USA's half-court offense has struggled to achieve cohesion, the team defense has been first-rate from the get go. Athleticism on the perimeter is this team's chief strength -- the U.S. has had great success in forcing turnovers to ignite a lethal transition game so far, and will need to continue to do so once the big games hit.

After not looking like himself for Team USA's first few games, Kevin Durant seems to be finding his comfort level and reminding us why he has become one of the best players in the world at the tender age of 21. Offensive production from Durant will be a must against the best teams, as this roster sort of reminds us of the 2002 version in that it's hurting a little for players who create their own shot. There was a lot pressure on Paul Pierce to produce every game. 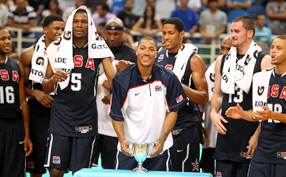 Derrick Rose earned the Tiffany's Player of the Game Cup after playing Greece. Will Team USA bring home the main hardware from Turkey?

Games with implications running throughout the tournament are rife in a competition such as the 2010 FIBA World Championship in which a handful of teams (USA, Spain, Greece, possibly Argentina and Serbia) appear to be head-and-shoulders above a wide-open field. What are the key games in this year's tournament, should we choose to not "take these games one at the time" in deference to the old sports cliché? Read on!

August 28, Russia vs. Puerto Rico. Team USA opens the knockout round against the fourth seed from Group A. Assuming Greece and Turkey finish 1-2 in either order, this opening day match between the seemingly slow-starting Russians against the giant-killing Puerto Ricans could determine the group's nos. 3 and 4 real quick.

August 29, Germany vs. Serbia. With Milos Teodosic and Nenad Krstic out for this game, the upset-minded dark horses of Deutschland could surprise here. Should Germany finish either second or third in their group, they'll presumably face a manageable team in the second round in Brazil, Slovenia or Croatia.

August 30, Germany vs. Australia. Should Serbia survive Germany in game two, game three with the Germans against the Aussies should determine the Group A seeds no. 3 and 4 -- and that no. 4, again, is assumed to be drawing Team USA in the first game of the knockout stage.