Analysis: Tunisia is another one of the surprises in this FIBA 2010 World Championship.

The comments by Tlatli after his team defeated Cameroon 83-68 in the bronze-medal game in Afrobasket demonstrate this.

"This is the greatest achievement in Tunisian basketball ever," Tlatli told FIBAAfrica.com. "We don't know what to expect in Turkey, but we are going to do our best to represent our country and the African continent."

Tunisia prepared in the United States on its road to the world championship, defeating Belgium and Ivory Coast, the team that came in second in the African qualifier, while losing to Finland.

The best players on the Tunisian team are Rzig and Hdidane. Rzig is a guard who plays in the Egyptian league and averaged 16.4 points at Afrobasket. He was the key figure in the bronze-medal game against Cameroon.

Hdidane is a forward who plays in the local Tunisian league and averaged 8.8 points in the world championship qualifier.

Here's Team USA's schedule for the 2010 FIBA World Championship slated for Aug. 28 to Sept. 12 in Istanbul. 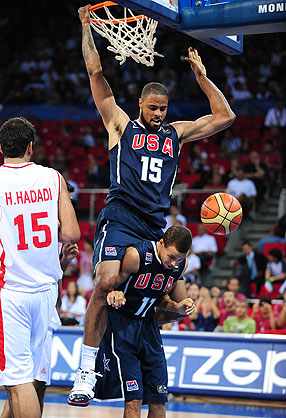 Stephen Curry came off the bench to hand out five assists, and also found time to keep teammate Tyson Chandler from falling in Team USA's easy win against Iran.