I'd be hard-pressed to name a team that's had a better May and a worse June. The Phoenix Suns were a huge success story in 2009-10, winning 54 games, unexpectedly making a run to the Western Conference finals and duking it out through six tough games before succumbing to the Los Angeles Lakers. Such success would have been a nice story to take into training camp.

Unfortunately, that's now a distant memory. The ownership tenure of Robert Sarver took another turn for the bizarre when he couldn't agree to terms to keep Steve Kerr as general manager and let well-regarded assistant GM David Griffin walk too, setting the tone for a depressing offseason. For good measure, star forward Amare Stoudemire left as a free agent, ending a six-year run on the receiving end of the game's most lethal pick-and-roll combo.

• Click here to read the rest of Hollinger's outlook, projections.

Evans became only the fourth rookie in history to average 20 points, five rebounds and five assists, placing him in some exalted company -- the other three were Oscar Robertson, Michael Jordan and LeBron James.

Certainly, he can get to the rim against virtually anyone, and he figures to be a Dwyane Wade-like scorer who spends entire games at the foul line. But first he needs to finish with his left hand once in a while. Houston's Shane Battier preyed upon this weakness to block four shots in one game simply by waiting on Evans to come back to his right hand. Evans also needs to improve as a shooter -- he made only 32 percent of his long 2s.

Finally, one wonders if the Kings are spoiling Evans. The pomp and circumstance surrounding the late-season game when he clinched a 20-5-5 season was entirely inappropriate -- the Kings promoted it like they had won the Western Conference championship. More tellingly, there were a lot of games when he clearly wasn't going full bore on defense, with seemingly tacit approval by the coaching staff. An offseason speeding arrest that saw him hit 120 mph raised further questions about his maturity and judgment.

• Click here to read the rest of Hollinger's players projections for the Kings. 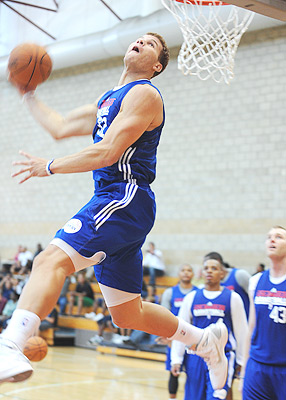 With a healthy Blake Griffin, hopes are high for L.A.'s other team. Hollinger: Forecast | Profiles

By Brian McKitish
Special to ESPN.com

Don Nelson, you will be missed, my friend. For years, Nelson's up-tempo offensive scheme, dubbed "Nellie-ball," was synonymous with "fantasy-friendly." Say what you will about Nellie's quirky lineup decisions and complete lack of emphasis on defense, this guy was an offensive genius. As evidence, let's take a quick look at the Warriors' scoring averages the past four seasons:

Needless to say, the Warriors were filled with quality fantasy options during the Nelson years. And that collective gasp you may have heard on Sept. 27 when Nellie announced his retirement was the fantasy community wondering what his departure would do to our beloved Warriors.

Enter new head coach Keith Smart, a former Indiana Hoosier and Nellie's right-hand man as an assistant coach for the past seven years. Many fantasy owners are worried that Smart's emphasis on rebounding and defense will negatively affect the Warriors' fantasy firepower. It's a valid concern, so we had ESPN Stats & Information dig up some numbers on the 10 games in which Smart served as acting head coach for the Warriors last season when Nelson was ill.

• Click here to read the rest of McKitish's outlook.