• The Spurs have won their past 17 games against the Clippers. It's the longest current team-versus-team winning streak in the NBA, though nine games shy of the all-time record. The SuperSonics won 26 straight games against the Timberwolves from 1991 to '97.

• Teams are scheduled to play on the road at Miami and Orlando on consecutive days (or nights) 14 times this season, including two pairs of back-to-back games in Florida for both the Bucks and Raptors. Eight of those 14 teams are scheduled to play the Magic first, followed by the Heat. Six teams (including Utah the past two nights) will play Miami first before visiting Orlando.

LeBron on getting over stunning loss to Jazz: "If you're a competitor, it'll stay w/you for a while." Heat host Boston Thursday.less than a minute ago via Twitter for BlackBerry®

Fantasy Focus: Give Williams A Look

By Tom Carpenter
Special to ESPN.com

The Golden State Warriors are headed to Madison Square Garden to face the New York Knicks tonight in what should be a high-scoring affair. Unfortunately, the Warriors likely will be balling without Monta Ellis, who injured his back in their most recent game. It appears to be a short-term ailment, but it sounds as though he'll probably miss a couple of games. Look for Reggie Williams to get more play if Ellis is out.

This will be David Lee's first game back at MSG, so expect some big production. This also will be Anthony Randolph's first game against his former Warriors teammates, so he might see an uptick in production for the night. I also think we might finally see a monster game from Amare Stoudemire, since the Warriors have no interior defense to speak of. 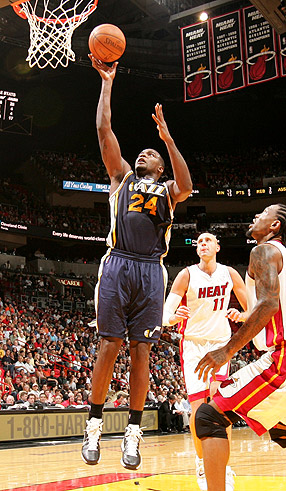 (Nathaniel S. Butler/NBAE via Getty Images)
A night after a miraculous 22-point comeback against the Heat, Paul Millsap heads four hours north to take on the Southeast-leading Magic.