MIAMI -- LeBron James welcomes the New Jersey Nets and the Minnesota Timberwolves as parts of the NBA and said that he never intended to advocate contraction in recent comments he made about the league's "watered down" talent level compared to the 1980s.

"That's crazy, because I had no idea what the word 'contraction' meant before I saw it on the Internet," James said after the Miami Heat's practice Monday. "I never even mentioned that. That word never even came out of my mouth. I was just saying how the league was back in the '80s and how it could be good again. I never said, 'Let's take some of the teams out.'"

James found himself Monday in a position of yet again having to clarify some controversial comments. On Thursday, he told reporters before the Heat's game against the Phoenix Suns that he would like to see more stars playing together instead of them being spread out throughout the league.

Another Big Jam From Blake

No team has more wins against teams with winning records than the Dallas Mavericks. No team has a better road record than the Mavs, either.

And no team sits above them in ESPN.com's weekly NBA Power Rankings after the Mavs' pre-Christmas road sweep of the Florida teams and the end of Boston's 14-game winning streak.

Dallas has returned to the top spot of the rankings for the third time this season largely on the strength of its 12-3 mark against teams currently at .500 or better and the 10-1 road record it takes Monday night to Oklahoma City. The Celtics drop to No. 2, with San Antonio and Miami holding firm at No. 3 and No. 4, respectively.

The defending champs from L.A., meanwhile, have fallen to a season-low No. 7 after the Heat held them 25 points under their season scoring average in the teams' much-hyped Christmas Day showdown. Going into the season, you would have gotten good odds that the Lakers would never fall out of the top five, but their 13-9 malaise since an 8-0 start -- with a record of just 2-4 against teams at .500 or better -- left the committee (of one) no choice. 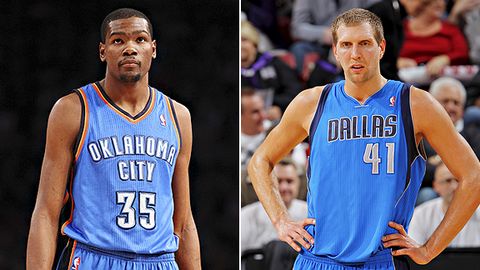 Two of the league's top scorers meet when Kevin Durant's Thunder host Dirk and the Mavs.

Casey To Coach Mavs In Oklahoma

"It is no different. [Assistant coach] Terry [Stotts] and I both have been through this before," said Casey, who directed Sunday's practice in Carlisle's absence.

"We have veteran players and we just have to continue what we have [been doing]. What we have to do is regroup and re-energize our edge, the edge that we had before the break, especially against a team like Oklahoma City."

Carlisle is expected to return to the bench for Tuesday's home game against the Toronto Raptors.

Nash, Stoudemire And The Divorce

In 2004 and 2005, as my Timberwolves were just beginning their long, painful shame spiral, the Phoenix Suns gave me a reason to keep on loving the NBA. There were many good reasons for this: their defiance of orthodox positionality; their feverish pace of play and relentless scoring; the palpable joy they brought to the game.

But the biggest reason the Suns enchanted me was the on-court relationship between Steve Nash and Amar'e Stoudemire. To the casual observer, the two seem as ill-matched as a some oddball pair in a buddy comedy, and just as racially typecast. The savvy, selfless, veteran (white) tactician meets the brash, unschooled but athletically magnificent rim-crushing (black) manchild. Hilarious misunderstandings ensue.