Long before the latest teasing ride on the NBA's lockout roller-coaster, front-office executives around the league began planning for the return of the magic bullet that gives teams a do-over with one regrettable contract.

Teams have actually known it was coming since the spring. A clutch of small-market teams are angry about it, too, because it's a rule that -- for all the cries from NBA commissioner David Stern about the need for a new system that improves competitive balance -- clearly helps big-market, deep-pocketed teams most.

Yet you can rest assured that every team, whether they like the amnesty concept or not, hasn't let the up-and-down pattern of labor talks in recent weeks stop them from drafting their own mock amnesty lists. GMs long ago began forecasting who will be joining the free-agent pool through the amnesty hatch, largely because the 2011 version of the provision will go multiple steps beyond the 2005 original.

Taking our cue from those GMs who aren't waiting for the details -- as well as our Grantland colleagues Bill Simmons and Jonathan Abrams who couldn't resist launching into their own amnesty debate in late September -- we've compiled a team-by-team breakdown of the players each club is most likely to set free. The distinction here is that this list was compiled (A) factoring in the flexibility teams expect to have by "saving" their amnesty clause and (B) by consulting with various team officials who are doing the same research and preparation in advance of the amnesty rule's return. 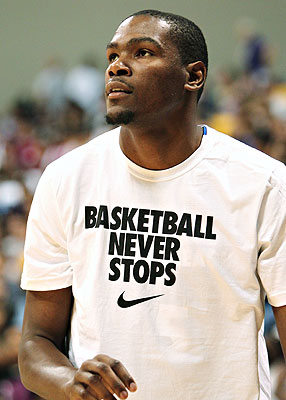 Leon Bennett/Getty Images
As much as we've enjoyed seeing Kevin Durant tear it up during pickup games this summer, we sure wish he was playing Kobe's Lakers tonight.

So, here we are, Tuesday, Nov. 1. It was to be one heck of an opening night to the 2011-12 season. The defending league MVP Derrick Rose and the Chicago Bulls were to be in Big D to take on the defending champs, the NBA's marquee matchup to start the season and to continue the riveting storylines set off by one of the most electrifying seasons in NBA history.

Yet, here we are with nothing doing. The lockout, seemingly so close to resolution last week only to blow up again, will leave the American Airlines Center dark on Tuesday night.

We can only assume under normal circumstances that the Mavs would have re-signed Tyson Chandler in July, and the man who effectively changed the course of a franchise would get a little teary-eyed as the players received their diamond-encrusted rings and the 2010-11 championship banner, the first in franchise history, was raised to the rafters as the sellout crowed howled in delight.

It won't happen Tuesday night. No one can be sure when it will.

"I was pretty much expecting that this," Chandler said, "could be the outcome."

And so we wait for the NBA owners and the players association to pick up the phone and schedule yet another round of meetings, and hope that the two sides can stop antagonizing each other and finally come to an agreement and salvage a season.