MIAMI -- At the moment, the Miami Heat are a study in perception.

They won their seventh consecutive game by double figures with a highlight-rich 120-108 victory Tuesday night over the Sacramento Kings. They shot 56 percent as a team, Dwyane Wade had a virtuoso performance with 30 points, 10 assists and three steals and Mario Chalmers had one of the best shooting games of his career with six 3-pointers.

But because it was against the Kings, who frankly played with excellent energy and focus for more than 40 minutes, and because the Heat have been slamming every opponent for two weeks, there were apologies offered from Miami's locker room.

"We talked about what is our motivation is right now, what are we trying to achieve?" Erik Spoelstra said, complaining his team played flat at times. "We wanted to try to improve and specifically work on our inconsistencies. Did we accomplish that completely? Not necessarily."

This was even as Kings coach Keith Smart said, "We were pretty close to a perfect game."

Rookie Isaiah Thomas had a 20-point third quarter, the Kings had 24 assists and Tyreke Evans and Marcus Thornton combined to shoot 18-of-34 and score 44 points. The Kings hit 13 3-pointers and outrebounded the Heat. And Sacramento was still down by 18 points in the fourth quarter.

Meanwhile, this supposed so-so effort behind them, the Heat quickly forgot it and turned their attention to the next game. Which happens to be against another sub-.500 opponent that's actually lost two of its past three games to other sub-.500 teams.

Of course, James means Jeremy Lin (and Carmelo Anthony) and the New York Knicks, who are due in town Thursday night. Ticket prices for that one are spiking toward regular-season records in Miami and there are rumors that two presidents -- Barack Obama and Bill Clinton, both of whom are scheduled to be in Miami for speaking engagements -- might show up.

"We haven't even brought up that name in the last 48 hours," Spoelstra said. "It spoke to our guy's maturity not to get ahead of ourselves."

To hear the coach talk about it, getting through what looked like an inspired Kings team without obsessing over he who shall not be named was the accomplishment of the night for the Heat. That's apparently the reality the NBA, and plenty of its fans, is now gripped with.

X factor: This game would likely have been very different had Tim Duncan and Tony Parker played for the Spurs. Gregg Popovich opted to rest his stars, opening the door for Portland to cruise to the win.

MVP: In his first start since being promoted, Jamal Crawford led an offensive explosion, connecting on five 3-pointers in the first half as the Blazers pulled away. The notoriously jumper-happy Crawford also dished out eight assists.

Defining moment: Elliot Williams' monster dunk to push the Blazers to 130 points for the first time in several years. There's nothing valuable to learn from this game for either team. Just enjoy the garbage-time stat padding.

Defining moment: Though Philly never led in Tuesday's contest, it threatened until Rudy Gay -- who was otherwise somewhere between meh and OK -- drained a deep 3 with 2:09 left to push the Grizzlies' lead to 85-74 and send the suddenly reeling Sixers to their fourth straight loss.

MVP: Marc Gasol. With Eli Manning's second Super Bowl MVP and the continued rise of Pau's little brother (who shredded the Sixers with 15 points, 14 boards, seven assists and five blocks), the early going of 2012 has been a halcyon day for less-talented younger siblings. Roger Clinton, the ball's in your court.

That was ... obvious: As a general proposition, it's bad strategy in basketball to spot the opposition a 21-point lead in the first 11:30. Somebody probably should have told the Sixers this.

MVP: Dwyane Wade had a monster game, with 30 points on 11-of-16 shooting plus 10 assists, three steals and two blocks. He did it all in less than 30 minutes on the floor.

That was ... a laser: After blocking a Francisco Garcia layup attempt, LeBron James fired a 70-foot chest pass that barely cleared DeMarcus Cousins and landed in Wade's hands for a remarkable alley-oop basket.

MVP: Kyrie Irving. He performed poorly for three quarters but carried the Cavs in crunch time. Irving posted 17 points in the final period, including two free throws with 11 seconds left that iced the game.

That was ... unexpected: What initially looked like a routine win for the Pistons transformed into a frenetic competition when the Cavs started raining 3-pointers like meteors during the end of days. A largely boring game yielded six minutes of sheer electricity.

X factor: Antawn Jamison's 29 points in the first three quarters were the only reason his team was remotely close heading into the fourth. He also nailed a 3 that put the Cavs up one with 5:52 remaining.

MVP: Roy Hibbert. He scored a career-high 30 points to go along with 13 boards and two blocks. He wasn't the only Pacer to play well (every starter scored in double figures), but he was -- literally and figuratively -- the biggest.

That was ... so necessary: After losing five straight recently, the Pacers needed to regroup heading into All-Star Weekend. In battling back to win this one in OT, they only need beat the Bobcats to enter the break in good spirits.

Kyrie Irving, Cavs: After scoring just eight points through the first three quarters, Irving showed why he's running away with the rookie of the year award by dropping 17 in the fourth to lift the Cavs over the Pistons.

San Antonio Spurs: Or, the cast of characters masquerading as the Spurs. In the midst of a league-high 11-game winning streak, San Antonio sat Tim Duncan and Tony Parker. With rookies Kawhi Leonard and Cory Joseph and D-League call-up Eric Dawson fielding the most playing time, the Spurs gave up 137 points to the Blazers.

Okay if you ask me what position Air Bud played, you can't get mad when I say, "Chewing Guard." #DDLTweets

6. Quote Of The Night

-- Nets forward Kris Humphries, on his postgame conversation with Jeremy Lin after the Nets' 100-82 victory over the Knicks on Monday. 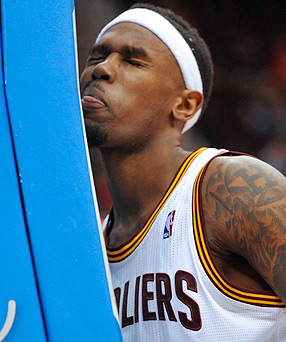 David Richard/US Presswire
Boobie Gibson and the Cavs hit a wall early against the Pistons but battled back from a 17-point deficit thanks to a combined 30 fourth-quarter points from Kyrie Irving and Alonzo Gee.

9. Dunk Of The Night