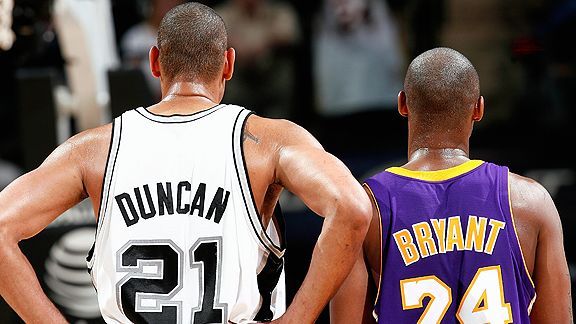 Photo by Getty Images Tim Duncan and Kobe Bryant have stood tall in the West for a decade. Can either reach the Finals?

The Lakers and Spurs have represented the Western Conference in 10 of the past 11 NBA Finals and have taken home a combined eight Larry O'Brien trophies in that span.

However, the two franchises' dominance in the West will be harder to maintain this season.

Although they have the best record in the conference (54-21) and the second-best record in the league, the Lakers have hardly looked championship-caliber of late, having lost three of their past four. The Spurs, meanwhile, have surged since March, winning 12 of their past 15. But with age and injuries becoming more and more of a factor as the season goes on, there's no telling how far this battle-tested playoff team can last.

So what's in store for both teams for the stretch run? Here are three keys for each team heading into their matchup on ABC (Sunday, 3:30 p.m. ET), and before a possible first-round series:

The Lakers are coming off an Eastern swing having lost three of their past four games. They look disinterested at times and like they are simply going through the motions before the playoffs. Although the Lakers are in first place in the West, they are only 13-8 since the All-Star break. They are back home Sunday versus the Spurs in a game they should win. However, if they are to win back-to-back NBA championships, they need to continue to improve as the playoffs quickly approach.

1. Which Kobe is going to show up on a nightly basis? The one who is the best or second-best player in the NBA, or the one who is going to jack up shots, not stay within the team's offensive flow and just do whatever he wants on the defensive end of the floor? When Kobe is focused and on point, there may not be a better player in the league and the Lakers are extremely tough to beat. But when he is going one-on-one from the top of the key and wing with no regard for his teammates, or he is roaming on defense and not playing team defense, or when he is verbally torturing a fellow teammate, the Lakers are extremely vulnerable.

2. Feed Pau Gasol the ball. When Pau gets touches, the Lakers are a better team. It is important for him to command the ball, work hard for position and go strong to the basket. When he is a focal point of their offense it gives the Lakers much more of an inside-outside attack. There are times when Kobe and his teammates look him off and do not get the ball to Gasol on the box. He is their only true inside post presence until Andrew Bynum returns.

3. The defense is slipping. The Lakers have allowed opponents to score way too easily of late, allowing opponents to average 102.6 points and over 48 percent in their past three losses. Defense is something a team must work on and be committed to during the entire season, and the Lakers did that in their run in last season's playoffs. They must get back to defending individually and make the necessary commitment to team defense that helped them win a title.

This is not the San Antonio Spurs team you are used to watching. It is, however, a broken-down version of the championship-caliber team that has been one of the NBA's model franchises. But the Spurs have played very well of late, going 12- 5 in March, even without the services of Tony Parker in the past 14 games. In the past two weeks, San Antonio has beaten Miami, Oklahoma City, Cleveland and Boston. Unfortunately, its loss to the Nets this past Monday (without Ginobili) also tells you how vulnerable this team really is.

1. Manu Ginobili has played at an extremely high level during the past two weeks. In his past eight games, he is averaging 25 points and virtually carrying the team on his back. Manu is back to his old self, attacking the rim, shooting 3s, running pick-and-rolls, grabbing steals and dishing out assists. He is doing it all.

2. Parker has been out of the Spurs' lineup since March 8 with a broken hand. He is expected to be back in time for the playoffs; if not, the Spurs have no real chance. Still, George Hill has stepped in for Parker and done a very good job, averaging 18.4 points over the past eight games. If Parker does come back healthy, the experience that Hill has gained in this starting role will pay big dividends come playoff time.

3. Richard Jefferson has been a major disappointment for the Spurs this season. Acquired to bring scoring and athleticism to the lineup, Jefferson has been an incredible tease who continually disappears and looks lost. He is a high-level athlete who can defend, score and get to the rim. If he can somehow find the will to play at a high level in April and continue that in the playoffs, he might be able to resuscitate the Spurs' playoff chances.

Last year, Lakers observers didn't care if their team played Utah, New Orleans or Dallas to kick off the postseason. The Lakers' first-round foe was merely a speed bump before more challenging opponents that lay in later rounds.

This year? Not so much. The gap between L.A. and its potential Round 1 opponents isn't nearly as large as the No. 1-vs.-No. 8 seeding might have you think, especially if you consider recent performance.

Of the three teams the defending champs are likely to face to open the playoffs -- Oklahoma City, Portland or San Antonio -- none looks particularly appetizing. Regardless of the opponent, the Lakers will be facing a team that is playing dramatically better than they are in the first round.

Q: The Celtics are starting to pick it up. I remember them going on a streak just before this one and everyone thought they would become elite again. Then they came back to Earth. Do you think this streak is for real? -- John (Atlanta, Ga.)

A: John's question came in after Friday's win over the Kings, with Boston having won five of its last six to that point. The point here is to show 1) John was correct to have a little skepticism about whether the team was truly emerging from its struggles, and 2) How quickly we can change our view of this team.

I keep going back to it, but it's an 82-game season. That's A LOT of games. Not a season goes by where a team doesn't endure a series of highs and lows. Even when you're winning, coaches often see room for improvement in their squads (just look at Boston's hot start last year when Rivers noted the team wasn't playing great fundamental ball despite the wins).

Some Celtics fans are frustrated by this team because they can't get a read on it. They slam the panic button at the lows and boast about raising an 18th banner at the highs.

But remember to enjoy the ride. The best part of sports is the unpredictability. It's always fun to look back and reflect how a team galvanized en route to a championship.

After this grim Garden season is complete, a city of 8 million point guards will fast-forward past the Finals and the draft and stop dead on the stroke of midnight, July 1, when Knicks president Donnie Walsh makes what could be the biggest phone call in the history of New York sports.

LeBron, this is Donnie. Will you stay or will you go?

Actually, that first call will go to James' agent, Leon Rose. But no rep is making this decision. Only an athlete with a "Chosen 1" tattoo racing across his comic-book back can decide what, exactly, he was chosen to do.

To lead the hometown Cavaliers to a title or three? To save the big-market Knicks from themselves?

James should pick Door No. 2. Win, lose or draw in the playoffs, he should honor the magnitude of his game, his persona and his appeal and do a summer deal with the Knicks that would reduce the sale of Babe Ruth to a story the size of a rosin bag.

No, this isn't to say a start-to-finish career in Cleveland amounts to a bad option. The Cavaliers have been good to LeBron. They've built a consistent contender around him, and, of course, they'll pay him the maximum wage to stay, some $30 million more than the Knicks are allowed to bid. 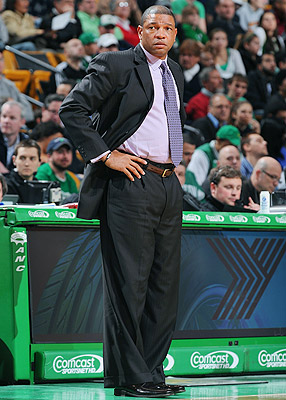 8. Rise Of The Lakers

By Roland Lazenby
Special to ESPNLosAngeles.com

Editor's note: This is an excerpt from Lazenby's book "Jerry West: The Life and Legend of a Basketball Icon."

While the exhibition games packed high school gyms, the start of the regular season brought a different story. West's new basketball home would eventually become the fourteen-thousand-seat Los Angeles Sports Arena, built in 1959 near the Coliseum. Funded by public bonds, the facility transported basketball into the modern age, as if a giant flying saucer had landed in the neighborhood near [the] University of Southern California on a mission to show Los Angeles the future. Other arenas in the country couldn't compare to this strange oval.

With its space-age decor, the Sports Arena featured elevators to lift spectators to the seating levels and electric fans to keep the flag waving gracefully during the national anthem. Even the turnstiles were electronic, keeping a running tally of the crowd size on a scoreboard as each spectator entered. Both UCLA and USC scrambled to play their games there, leaving the Lakers to settle for an unusual number of Sunday and Monday dates. Otherwise the Lakers had to search for local venues to play on their other game days. That, strangely, would prove to be something of an early boost. Small venues cloaked dismal crowds better than the cavernous new arena.

"They were drawing nothing," [Lakers broadcaster Chick] Hearn said. "They would play one night at a high school gym. They played the Shrine Auditorium on a stage! If you fell off the side, you dropped six feet. They played at the University of California, wherever its various locations were. They just couldn't build a following. Wherever they played, the thousand people who lived in that area might go. But the newspaper coverage was very, very slim. It wasn't very easy elsewhere either. In the East, they were playing doubleheader games at neutral sites, trying to find a crowd."

The Life and Legend of a Basketball Icon