Look To The Road For Answer 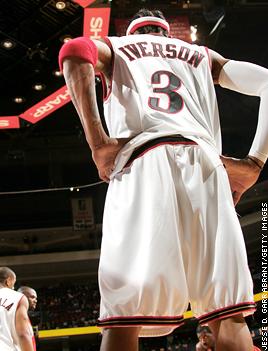 Wednesday's Best
Allen Iverson, Sixers guard: The new and improved Answer sinks 16-28 FG attempts en route to 38 points and a 111-100 win over the visiting Warriors. Threw in eight assists, six boards and three steals. Not quite Kobe's outburst, but not too shabby.

Wednesday's Worst
Desmond Mason, Hornets swingman: Des spent 24 minutes on the (Off) Target Center court, sinking but 1-9 shots. Explains some why NOK scored only 69 as a team in the 88-69 loss to Minny.

Quote of the Night
"It was great to come out angry enough to try to put last night out of their heads. We played well most of the night, but a lot of the fuel for that came from last night."
-- Spurs coach Gregg Popovich, after his team beat the Knicks. On Tuesday, they lost in OT to the Bucks.

Pat, Bronx: Do you see Isiah Thomas making any moves for the Knicks? Or will we be stuck with the current circus?

Bill Walton: It's very sad what has happened with the Knicks. In the four years that ESPN and ABC have had the Knicks, the Knicks have never had a winning team. The only people who could possibly derive joy from the Knicks being so horrible are the diehard Celtic fans. It's sad for all of basketball. This is a business and the importance of New York City to this business is immeasurable

The Celtics defeated the Jazz, becoming the last NBA team to win two consecutive games this season. It's the furthest that Boston has gone into any season before registering a two-game winning streak. In NBA history, only two teams have gone through an entire season without winning two in a row: the 1986-87 Clippers and the 2004-05 Hawks.

Kobe Bryant was on pace to become the ball-hoggin'est player in history in November, with a Usage Rate Multiple that put even Michael Jordan's to shame. But once Turkey Day passed, Bryant started passing too. He sharply cut his shot attempts, upped the assists, and posted a Usage Rate in the range of his previous two seasons. That's still plenty high, but he's no longer forcing teammates to pry the ball from his hands to get touches.

Boos Reign Down On Steph
The Garden finally turned its venom on Stephon Marbury late in the third quarter last night. The fans had booed the Knicks plenty this season, but only collectively. That is, until last night's latest Knick nightmare, punctuated by Marbury getting hammered by boos as the Coney Island product walked all alone to the bench with 3:13 left in the third quarter. 'That's New York,' Marbury said of the boos after getting schooled by Tony Parker. 'A lot of people look at it as you're making a lot of money, and don't think that's fair. I'm going out and doing what's asked of me. Everyone has to take the blame collectively.'" -- New York Post

Bryant Could Have Grooved To 80
The "what-ifs" blew across the Southland like the Santa Ana winds Wednesday. As in, 'What if Kobe Bryant actually played the entire game against the Dallas Mavericks?' Bryant scored a career-high 62 points Tuesday night against visiting Dallas despite playing only three quarters in a 112-90 blowout victory. Bryant originally balked at speculating on how many points he might have totaled had he played the fourth quarter, then threw out a figure that has been surpassed only once in NBA history, a historic 100-point effort by Wilt Chamberlain in 1962. 'Probably 80,' Bryant said. 'I was in a really, really good groove.''' -- Los Angeles Times

Kirilenko To Visit Back Specialist
"Andrei Kirilenko wasn't doing the Jazz any good on the East Coast. He couldn't play, he couldn't practice, he couldn't even sleep. So the Jazz sent their Russian forward to Los Angeles on Wednesday to see specialists about his bad back. 'He needed to go get that taken care of,' said Jazz coach Jerry Sloan. The Jazz won't reveal the extent of Kirilenko's injury, but it's safe to assume it has turned out to be far more serious than expected." -- Salt Lake Tribune

Felton's Productivity Rises As Starter
"Should anyone be surprised Raymond Felton thrives as a starter? That's really all he knows. He was a dominant player, growing up in Latta, S.C., and became the starter at North Carolina virtually the minute he stepped on campus. So naturally he'd be more comfortable with the steady minutes that come with starting. His productivity skyrocketed in three starts, and the Bobcats are 3-0 in those games. So at least until Kareem Rush returns from a badly sprained left index finger, the Bobcats figure to keep pairing point guards Felton and Brevin Knight as the starting backcourt." -- Charlotte Observer