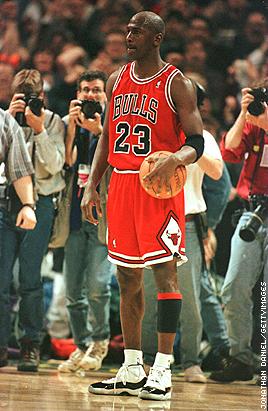 Getting to 70 wins ain't easy, Detroit. Just ask Michael Jordan, seen here after notching the historic victory vs. the Bucks in 1996.

Baron Davis won't openly lobby for the Warriors to sweeten their Ron Artest offers to Indiana. Input on a potential trade, Davis told me, is "not something I want."

"I trust management," Davis said. "They brought me here and I appreciate 'em for that, but at the same time I don't want anything to do with [decision making]."

Davis also won't be protesting if Chris Mullin can concoct a deal that gets Artest to Oakland soon.

Turns out Davis and Artest are pals.

"I've known him since high school," Davis said. "We're actually friends. I know that any team he goes to, he's going to make them a lot better."

"I'm not scared of Ron-Ron," he said. "I've known him since my junior year of high school. We played AAU ball against each other, we got drafted together [in 1999]. We've got a nice little history."

January was going to be tough enough for Pau Gasol, who probably has to beat out three of the following five forwards to earn his first West All-Star berth: Tim Duncan, Dirk Nowitzki, Shawn Marion, Elton Brand and Carmelo Anthony. (Tracy McGrady and Kevin Garnett are, at present, the fans' choices to start at forward for the West.)

Yet that was rendered a secondary issue when the Grizzlies lost Gasol favorite Damon Stoudamire to a season-ending knee injury. Taking a four-game win streak into the weekend, including victories over Seattle (road) and Memphis (home) sans Stoudamire, provides only temporarily consolation … unless the Grizz can keep winning without him.

"We don't want to think about it too much," Gasol said, "because it hurts. It's really sad the way he went down."

The Clippers did have some interest in signing the very available Latrell Sprewell, who gets a hearty endorsement from new Clips point guard Sam Cassell.

The problem: Spree is still seeking a multi-year contract in the $4 million to $5 million range annually, according to NBA front-office sources.

If he doesn't lower those demands, chances are we won't see Spree anywhere this season … and maybe that's what he wants.

One man's take on the month-long Ron Artest trade watch, culled from Dimedom's web of front-office executives, coaches and scouts:

"Why is it taking so long? On one hand teams are thinking, 'Why should we give up a front-line asset for a guy [Artest] who's such a problem that the Pacers want nothing more to do with him?' On the other side, I'm betting that the Pacers are starting to get over their initial anger about the trade demand. Artest put the Pacers in a tough spot, but the owners there must be telling Donnie Walsh to take his time and look for a good basketball deal -- not just a deal that has a financial [benefit].

"If it were up to some of the coaches out there, I'm sure we would have seen a deal by now. Phil Jackson, George Karl, Mike Dunleavy, Dwane Casey -- none of those guys are afraid of Artest. But it's not because every coach thinks he's the one guy who can finally get through to Artest. What's the average life span of an NBA coach these days? It's only 12-18 months anyway."

From the Stein Line e-mailbag:

Ray (Chicago): When will people (and sports writers) accept the fact that the Shaq who destroyed the Nets and Pacers in the Finals is gone forever. You keep hearing people say, "If Shaq is 100 percent, Miami can beat anybody." He's not going to reach 100 percent, because he's 33 years old and out of shape. His best is probably 70 percent of vintage Shaq at this point. Your thoughts?

Stein: I don't hear anyone in the national media suggesting there's a chance we'll see Shaq in 2002 shape at playoff time. Miami isn't banking on that anyway. I'd say 70-80 percent of vintage Shaq, as you describe it, is the Heat's target range, alongside a full-strength Dwyane Wade and a pecking order in support of the two stars that's established and clicking by then. The problem in the playoffs last spring is that Shaq wasn't even playing at 70 percent capacity. Nor was Wade. Offer up Shaq at 70-80 percent by this May and I'm sure Pat Riley would snap your hand off.

"I don't want to say it, but I kind of took a step back last year. This year I want to show everyone that we're all equal."

Can anyone stuff a box score like Andrei Kirilenko?

It was the third time in Kirilenko's career that he had 10-plus points and at least five of everything else. It was also just the second time since 1973 -- when the NBA first began officially recording steals and blocks -- that a player put up a 6 or better in those five areas.

The only other such performance known to man (apologies to Wilt Chamberlain and any other pre-1973 contenders) came from Houston's Hakeem Olajuwon in March 1987, when Dream had 38 points, 17 boards, 12 blocks, seven steals and six assists in a double-OT victory over Seattle.

Kirilenko wreaked his havoc in 42 minutes.