See the Nets get the "Dimeth"-straight win, courtesy of Vince Carter's big shot, assisted nicely by Jason Kidd, whose streaking board crash on a missed free throw set up the heroics. 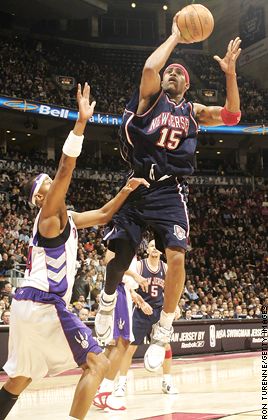 Before provoking his foe with a friendly slap, Vince Carter dropped two points on Toronto's Morris Peterson, who still had his shirt on at this point.

Sunday's Best
Vince Carter, Nets forward: Yep, the Daily Dime is all about VC in this edition. Tune in for his next episode on NBA TV, Tuesday against the Spurs. Start time is 8:30 ET.

Sunday's Worst
Mike Bibby, Kings guard: His 1-for-10 shooting from the floor set the tone for Sacramento, which was routed 108-83 on its home court by the Pacers. Kings droop to 13-19.

Quote of the Day
"That's definitely number one. "
-- Vince Carter, ranking his winning points Sunday among his greatest shots ever .

• See how all 98 who played stacked up

Earl Watson came off the bench to score a team-high 20 points in the Nuggets' 92-90 win in Houston. Watson played 21 minutes and made six of seven 3-point field-goal attempts. It had been nearly four years since a player made as many as six 3-pointers in so little playing time. The last was Michael Redd, who shot 9-for-14 from 3-point range in 20 minutes on Feb. 20, 2002.

Why 30 Is A Magic Number

If you listen to New Jersey coach Lawrence Frank there are plenty of reasons why the Nets are the hottest team in the NBA.

That's all fine and dandy, but the real reason is the play of Vince Carter, the Eastern Conference player of the month for December.

Yes, this team has Jason Kidd, a triple-double waiting to happen. Yes, this team has Richard Jefferson, possibly the most versatile forward in the game. But if you go back and look at the numbers there is a correlation between Vince and the number 30.

Since Vince joined the Nets last season the team is 27-6 when he scores 30 or more points a game. This season they are 8-1. The one loss was the fourth game of the season (90-89 to the Heat). Prior to the Clippers game on Dec. 20, Jefferson reportedly told Vince, "take care of your own and stop worrying about the rest of us."

So, if I'm coaching the Nets I'm telling Vince to get plenty of rest, drink plenty of fluids and I'll make sure your teammates get you plenty of shots.


Livingston On The Rise

What Shaun Livingston said after Kobe Bryant dropped 50 on his cornrowed noggin, along with the rest of the Clippers for a 112-109 win Saturday, wasn't exactly Allen Iverson's legendary refusal to verbally genuflect before Michael Jordan.

But it was in the neighborhood.

Livingston gave Kobe his props to reporters ("He got hot") but made it clear he is hungry for a rematch and would've liked more of a role in stopping Bryant. Quinton Ross, Daniel Ewing and Cuttino Mobley shared the Kobe assignment most of the night, but Livingston had him down the stretch and played a part in Kobe missing four of his last five shots.

Afterward discussing with Chris Wilcox how he wanted to defend Kobe on a pick-and-roll play ("I wanted you to force him to my side of the floor"), he muttered, "Man, I didn't like that chant. Those are supposed to be our fans."

The Clippers were technically the home team and the fans, at first, dutifully booed Bryant every time he touched the ball. After his personal 11-0 run to open the fourth quarter flipped a four-point Lakers' deficit into a seven-point lead, though, the crowd began the chant that irked Livingston: "Ko-be! Ko-be!"

Clippers coach Mike Dunleavy gave Livingston -- and not veteran Sam Cassell -- every chance to snatch the hero's role from Bryant, including control of the ball on the Clippers' last two possessions.

Livingston, unfortunately, had his first legitimate turnover of the night with 7.9 seconds left and the Clippers trailing 110-109. (Livingston was charged with three TOs against 10 assists, but the first was an offensive charge and the second came off a shaky inbounds pass by center Chris Kaman.) Playing pick-and-roll with Elton Brand, he went wide instead of knifing for the basket, allowing Smush Parker to snatch the ball for a breakaway dunk.

Dunleavy didn't waver, giving Livingston a chance to redeem himself with 4.4 seconds left. Livingston drove to the baseline this time and found Mobley in the far corner. Mobley sank the three that would've forced overtime but failed to beat the buzzer.

To some, Livingston might've been the goat. Me? I saw a hero-in-training.