Motion: Detroit Basketball Triumphant
If the Spurs are to climb the mountain, then this night was the valley ...
Champs hit hard 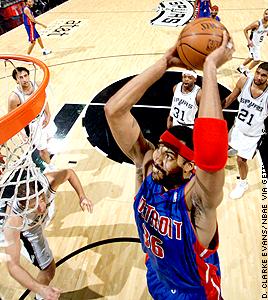 Rasheed Wallace prepares to deliver another blow to the pride of the defending champs. Detroit beat San Antonio, 83-68.

Thursday's Best
Rasheed Wallace, Pistons forward: Knocked down big shots early, so Spurs didn't hang around late. The techno popper (nine Ts lead the league) is taking (and making) more threes than ever before, sinking 2-for-5 on the average night.

Thursday's Worst
Michael Finley, Spurs swingman -- We see Fin working. Didn't want to open the Pistons' eyes to his game, should they meet in June. So he missed his four shots in 17 minutes. They'll think he's done. Smart. Very Smart.

"That team is good enough that you have to play a perfect game and we didn't do that."
-- Spurs coach Gregg Popovich, after his defending champs were routed by the Pistons

• See how all 54 who played stacked up


Don't Give Up, Indy

Donny, IN: Why is everyone saying that the Pacers season is a lost cause? They've looked pretty good to me lately without Ron Artest.

Chad Ford: I don't understand it. Clearly the Pistons are the best team in the East and will be difficult for any team to beat in a seven-game series if they are healthy. But ... they're one major injury away from being a beatable team. The Pistons have had an incredible track record of staying healthy, but odds say that at some point, one major player on their team is going to get hurt. The Heat are inconsistent. The Nets, Cavs and Bucks are all beatable. I don't think the Pacers are out of the mix, even if they wait until the summer to make an Artest trade. The odds are stacked against them, but there are a number of scenarios where they could still come out of the East.

Steve Nash had 20 points, 16 assists and seven rebounds despite playing only 39 minutes in Phoenix's win against Golden State. No other NBA player in the last five seasons reached all three of those statistical levels in a game while playing fewer than 40 minutes. The last to do it was Minnesota's Terrell Brandon on Feb. 23, 2001 (27 points, 16 assists and 10 rebounds in 33 minutes against Golden State).

There's a decent chance that the Celtics could trade Paul Pierce within the next six weeks. I don't want that to happen because you can always find another head coach, but you can't always find another Paul Pierce. Still, the "Should we trade Paul?" question has been lingering over this team since November, when it became apparent that Pierce was heading for a career season on a subpar team.

Playing his heart out every night, playing the most efficient basketball of his career, Pierce stands out the same way Tom Hanks stood out in late-'80s movies like "The Money Pit" and "Turner and Hooch." Back then, you always felt like Hanks could do better, that he would do better. Same with Pierce.