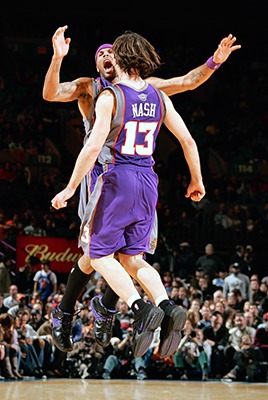 Nathaniel S Butler/Getty Images
Better bring your track shoes if you plan on hanging with Eddie House and Steve Nash.

Pacers CEO Donnie Walsh reiterated this week that he's prepared to keep Ron Artest past the Feb. 23 trading deadline if he feels the need.

But he doesn't think he'll need to.

Walsh told ESPN.com that he remains confident that the Pacers can find a suitable trade partner in the final month of trading season -- as opposed to waiting for the offseason to move Artest -- after an all-but-done deal for the Clippers' Corey Maggette collapsed.

Walsh adds that the Pacers' preference remains a trade involving only one other team and involving as few players as possible. Without discussing specific scenarios, he acknowledged that "we'd also look at cap savings."

Artest, according to Walsh, has not asked to be reactivated by the Pacers since the initial withdrawal of his trade demand. Walsh also said he won't consider allowing Artest to play for the Pacers again if no deal is struck before the deadline.

"Our plan is to trade him," Walsh said. "We have no plans to bring him back."

Golden State, Minnesota, Denver and both L.A. teams have all maintained strong interest since Artest was made available in mid-December. As outlined here last week, New Orleans/Oklahoma City is a below-the-radar option in the cap-savings category, because the Hornets can build an offer around fellow swingman Desmond Mason and his expiring contract in ($7.2 million) in a virtual salary match with Artest ($6.8 million).

The Wizards saved about $1 million by buying out guard Chucky Atkins in what amounts to a pre-emptive strike.

Washington explored trade possibilities but couldn't swing an Atkins deal without taking on more salary. The Wiz thus elected to give Atkins the freedom he sought to pursue a contract with Memphis, knowing the ex-Piston hasn't always hid his frustration well.

Atkins, who only wound up in Washington as a salary-cap throw-in that enabled the Wiz to acquire Caron Butler from the Lakers, was never going to play much in the nation's capital behind Gilbert Arenas and Antonio Daniels.

He'll soon be selected by the East's coaches to make his first All-Star appearance, in his ninth season, and I keep hearing that Billups is the point guard coveted most by USA Basketball in the build-up to the 2008 Olympics ... and not only because New Jersey's Jason Kidd is turning 35 that year.

Joel (Toronto): I really think you and ESPN should be promoting the idea that Antonio Davis need not be punished or suspended in a manner any more stringent than a hand slap. Understand this comes from a Raptors fan who really doesn't like Davis, but every policy has an exception or situation that was never planned for. This is a perfect example. He did everything right in an impossible situation. When he saw the man shoving his wife, he left the court, protected his family without assaulting anyone and left immediately when security had the matter under control. I didn't have respect for Davis until he did this and carried himself well in a terrible situation. He needs to be applauded here, not suspended.

Stein: Sorry, Joel. Can't help you. I'd classify myself as an Antonio fan, unlike yourself, but I'd say a five-game suspension is on the charitable side. Even NBA police chief Stu Jackson conceded that a player entering the stands usually nets a suspension measured in "double-digit games."

Players simply can't go into the stands for any reason. Period. Nothing happened this time, thankfully, but it's easy to take your view because the incident ended peacefully. It so easily could have been disastrous. Think about how far Davis traveled to get to his wife in the stands. All those fans he passed on the way probably had no idea what his intentions were, noble and restrained as they might have been. The reaction from those fans could have been anything.

I certainly don't fault Davis for worrying about his family above all else instead of stopping to consider the consequences; I'd do the same if Mrs. Line and our son Alexander The Greatest were endangered and I'm sure everyone in our midst feels the same way. But then you have to accept the consequences.


Marc's Quote
"Why don't you just get three fly honeys, talkin' nonsense, who cares what them talkin' about? Let them mention the NBA. People'll watch that, innit?"

That's famed comic and (mock) interview master Ali G., lecturing Charles Barkley and his TNT cohorts in one of those brilliant commercials released at the start of the season. I saw it again this week and felt a strong need to acknowledge the man's genius somehow.

I'm guessing few will remember this part of Wednesday's happenings at the United Center, but Ben Gordon didn't merely sink the game-winning jumper at the overtime buzzer in the Chicago victory that saw New York's Antonio Davis charging into the stands.

With a game-high 32 points, Gordon also recorded his first 30-plus game of the season. He had four of them last season in becoming the first rookie ever to win the league's Sixth Man Award.

Gordon also had a 13-point fourth quarter against the Knicks. It was just his second double-digit fourth quarter of the season, after recording a whopping 21 as a rook, and enabled Gordon to become the first player to score 30 points and sink a walk-off winning basket since Boston's Paul Pierce did it against Miami on Nov. 27, 2001.

(Wednesday's honorable mention goes to little Anthony Johnson, who had career-highs in points (27) and rebounds (10) in his 503rd NBA game -- Indy's 98-92 triumph over Charlotte. The only other player in history to have a career night in both of those categories in the same game after playing at least 500: A.C. Green for Phoenix in 1994 with 35 points and 19 boards in his 686th career game.)