Motion: Traveling Call
Houston's Tracy McGrady does his best work away from home. He is averaging 30.7 points in 18 road games -- including 38.0 in the last seven -- and 19.1 points in nine at home.
T-Mac Takes Charge

A Few More Points To Make 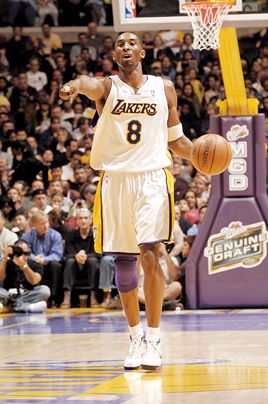 What will he do for an encore? Kobe Bryant points the way to his next game on Friday, when the Lakers host the Warriors.

Monday's Worst
Vince Carter, Nets swingman: Back pain incurred from taking a first-quarter charge does not exempt Air Garden State from this honor. Made 2-of-14 FGs, good for five points, 20 off his average. Nets fall to Jazz, 89-78.

"It feels good to be healthy. It's just a great feeling from where I started out at the beginning of the year with my back injury."
-- Rockets star Tracy McGrady, who had 41 points and nine rebounds in a 97-80 win over the Bucks.


Ways To Stop An 81-Point Scorer

One way to prevent another explosion of 81 points -- or more -- is to focus your offense on Kobe. Normally, you wouldn't do this, of course, but again, we're talking about ways to slow him down.

First, you attack him directly. Kobe's a dynamic defender who doesn't like to back down from a challenge. So challenge him. Make him work. Wear him out.

Second, attack him indirectly, by running him around a lot of screens. If he's playing good defense, this will tend to tire him. Of course, if he's conserving energy for the offensive end, this might not work.

Third, get him in foul trouble. Of course, this requires the cooperation of the officials, who might be reluctant to assign fouls to Bryant on a big night.

Fourth, try to keep your team in the game mentally. When Bryant went off, the Raptors went into a slump, lost an 18-point lead and became deflated. Meanwhile, the Lakers were pumped. That's human nature -- everyone gets caught up somewhat in the emotion of the moment. But you should try to keep your team going on offense.

But sometimes everything fails. Kobe defies logic. He's one of the few people gifted enough to make, against almost any defense, the kinds of shots he made on Sunday.

If I'm coaching Toronto, I don't get too worked up about this one game. As they say, it happens.

Anthony (Detroit): You said in a prior chat that the Spurs have a tougher path to the Finals than the Pistons because they will have to get past Phoenix, while Detroit won't have to face a comparable team. What about Miami? Don't you expect Shaq to be at his best come playoff time, making the Heat a serious threat to come out of the East?

John Hollinger: Everyone in Miami is saying the right thing about Shaq being in top form by the playoffs, but let me offer two counterpoints. First, he wasn't last year, so why should this year be any different. Second, have you seen the guy lately? I was shocked at slow and out of shape he looked. I mean, he can still get 20 and 10 most nights due to his sheer size, but what set him apart was his amazing quickness for a player of his size, and this year he's shown none of that.

Joe Morris (Toronto, Canada): Why would the Raptors let Kobe drop 81 on them without seriously double or triple teaming him in the last 3 minutes when the game was already over. Do you think it's the coach's fault?

John Hollinger: This came up a lot when Michael Jordan played too. The answer is that it's much harder to double somebody when they catch the ball 30 feet from the basket. Could the Raptors have done a few things different defensively? Absolutely. And I'm sure the Knicks would have liked to revist their strategy after Wilt got 100 on them in 1962. But it doesn't change the fact that it was a tremendous individual effort.

Is Kobe's scoring dominance good for the Lakers?
72.2% Yes, it gives them their best chance to win
27.8% No, it hurts the development of others and the team as a whole